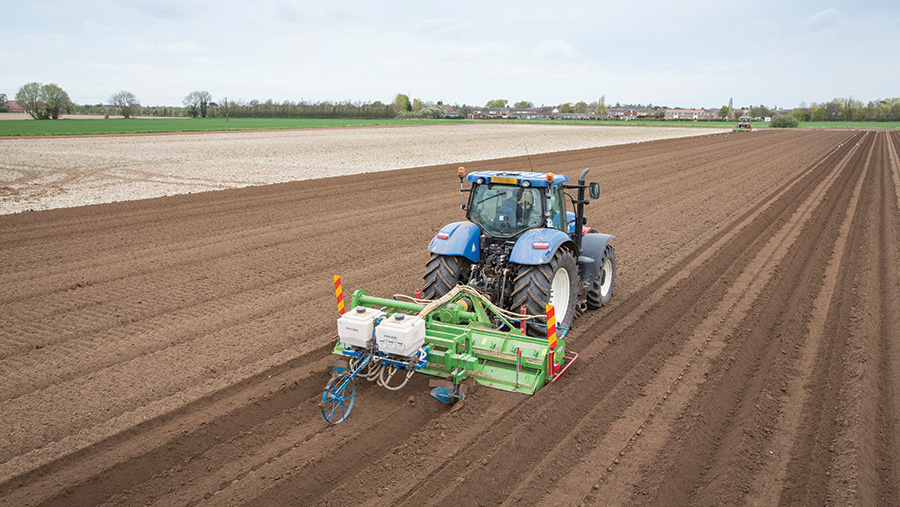 A Crops investigation into soil testing for potato cyst nematode (PCN) has highlighted a worrying variation in results across four commercial British laboratories.

PCN is an increasing problem for potato growers and has the ability to cause huge yield losses, with the pest estimated to cost to the industry about £50m annually.

Accurately determining the levels of the pest in soil is critical to make informed management decisions as part of an integrated pest management (IPM) strategy.

Depending on the result, growers will decide whether to use a nematicide, grow a resistant variety, to use both or to not plant potatoes at all and seek alternative land.

See also: Will product or price save the potato sector

It is recommended that in the presence of PCN, a resistant variety should be planted and where there are high populations, a nematicide is advised to protect crop yield.

York-based Fera is the only UK laboratory providing PCN testing that holds a good practice accreditation to the ISO 17025 standard, granted by the United Kingdom Accreditation Service (Ukas).

Fera’s senior nematologist Tom Prior was disappointed to see the industry results of the Crops investigation (see below), but not surprised at the variation in the samples.

“PCN won’t be adequately controlled until we use the correct management practices.

“These variations in lab soil test results could compound the problem and industry standards could help address the issue,” he adds.

The highest multiplication rate occurs when the initial population is at its lowest, so it is crucial for growers to detect PCN presence early and understand distribution and population densities, to both monitor population levels and establish whether control measures are working.

With distribution of PCN across a field often patchy – particularly soon after the pest is introduced – there can also be an uneven distribution through a bagged field sample if not adequately mixed.

Mr Prior believes some of the variability in results can be attributed to some labs using small sub-samples of field samples sent in by growers or agronomists.

“The sample processed by labs to extract the cysts should be as large as practicable, because the percentage error increases as the mean or average of the count increases.

In the Crops investigation, three of the four labs process either 100g or 200g of soil from field samples.

“Laboratories need to be processing more than 100g of soil per sample, depending on the size of the field sample received. Most traditional extraction equipment is designed to process up to 400g of soil, depending upon soil type.

“Fera currently advises a 1kg field sample per hectare from 50-100 cores, processed in its entirety,” says Mr Prior.

In addition to error introduced in the sub-sampling at labs, there may also be error when identifying species of cysts extracted from the soil.

For example, soil may contain beet, cereal, pea and grass cyst nematodes, which can all be confused with PCN, while to the untrained eye some debris can also be mistakenly counted as a PCN cyst.

As new molecular diagnostics are not in widespread use, identification of the cysts to genus and assessment of cyst viability is carried out using a microscope and as such, technicians need to recognise differences and distinguish between viable and non-viable eggs, adding a subjective element to the process.

Jon Pickup, head of virology and zoology and PCN expert at Science and Advice for Scottish Agriculture says the variation in results, particularly those of Lab one and four, could be flagging up a problem with identification.

“My concern is that discrepancies of this magnitude may have occurred due to technicians confusing other cyst nematodes with PCN, but it is hard to know by just looking at the figures.

“There has to be recognition that there is a need for training, tests and checks carried out to ensure that everyone is working to the same standards,” says Dr Pickup.

He adds accurate and consistent population distribution and density results are crucial to understand the potential yield impact of PCN and to ensure nematicides are used where they are needed.

Correct speciation is also crucial to ensure resistant varieties are being planted in the right place and in the presence of the relevant species of PCN – either Globodera pallida or Globodera rostochiensis.

“I would like to see the industry reach a point where it has confidence results are accurate enough to evaluate populations and species and other cyst nematodes are not counted in the results,” says Dr Pickup.

However, asked if all labs should work to set protocols, Dr Cowgill believes it is not essential, but co-operation between labs to ensure consistent results will be important in the future.

“An on-going AHDB project is looking at the possibility of a voluntary proficiency test where all labs receive exactly the same standard soil sample and have to work within an agreeable range of results.

“Labs have procedures that work for them and as long as they are getting consistent results, that should be acceptable,” she adds.

Dr Pickup agrees that interaction and supervision, combined with blind ring tests such as those conducted by Crops, would help to ensure labs are performing.

He is also involved in an AHDB-funded project, which will aim to give the best advice on field sampling protocols to ensure as little error is introduced into the process before samples reach the lab.

“We are investigating the feasibility of introducing an industry standard recommendation on sampling, including how much soil is needed per sample and over what area, sampling patterns and core sizes, which should be ready at the end of February,” adds Dr Pickup.

For a potato adviser using PCN test results, Yorkshire-based John Sarup believes detection is the first and foremost priority for PCN management, which all labs managed to do in the Crops test.

However, he says the range of 43 to 464 eggs/g in Field C is “worrying” and would be the difference between him recommending planting a resistant variety with a nematicide, or not planting potatoes at all.

“The more soil you can analyse, the better and 1kg/ha of soil sampled in the field and tested in its entirety is likely to give more consistent results.

“There should be an industry standard or an accredited technique that all labs are required to use for PCN testing,” he adds.

While reliable and consistent results are crucial, Blackthorn Arable agronomist Martyn Cox says tests using larger samples will inevitably come at a higher price, with the most expensive PCN sample about six fold more than the cheapest.

Where labs are using smaller sub-samples, they are processing less soil and can offer a more competitive price and he says that service needs to be maintained for growers.

“However, it is where you need early detection on so-called ‘clean land’, which might be below the detection threshold of 3.8m cysts per hectare, where this methodology has failed.

“Where it is worthwhile investing in more robust testing is around field entrances of ‘clean fields’ – anywhere soil can enter a field should be subject to more intensive sampling,” says Mr Cox.

Concern about inconsistent PCN lab tests results was raised at an Association of Applied Biologists (AAB) nematology conference last September and in response Crops conducted its own independent investigation.

Bulk soil samples were taken with a corer at four sites. All had a history of potato production in a one-in-six rotation.

The fields had previously been GPS grid sampled and tested. The same GPS device was used to collect fresh samples from discrete areas with known high, medium, low and negative PCN populations.

Each bulk sample was mixed thoroughly and a sub-sample of 750g sent to four out of about 10 laboratories in England that offer PCN testing.

Results of the analysis displayed in viable PCN eggs/g of soil can be seen below.

In the case of the known low population there was some variation in the results, but not significant enough to effect management decisions on farm.

However, in the moderate population there was a range of 196.6 eggs/g and in the high population, a significant 421 eggs/g range between lowest and highest.