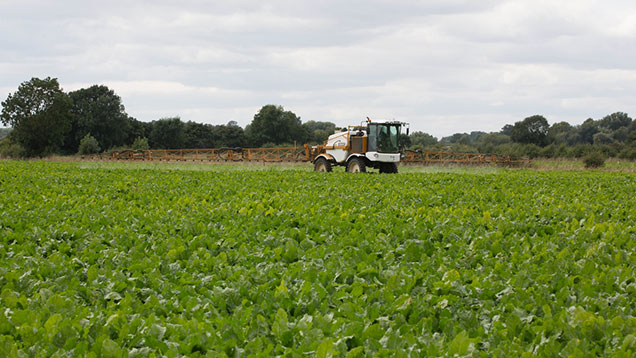 Early fungicide treatments could prove crucial in optimising sugar beet yields next season as growers look to get higher yields from reduced areas.

This means many beet growers will shrink their cropped area and place more emphasis on maximising yield.

However, high levels of rust were reported that underlined the importance of a good fungicide programme to achieve this increase in output.

In Wellingore, Lincolnshire, distributor Frontier has been carrying out fungicide trials, which showed early applications and a two- or three-spray programme to tackle rust is crucial, according to the firm’s technical manager Christine Lilly.

“There has been a lot of disease around this year, with rust being more prevalent than powdery mildew and we have really seen the benefit of investing in a fungicide programme,” she says.

It is estimated just less than half of UK beet farmers use a two-spray fungicide approach, so many could be losing out on the potential yield benefits gained from additional fungicides.

“The cost of a fungicide is approximately £25-30/ha plus about £8-10/ha for the application cost, so it doesn’t need much yield to pay for it,” she explains.

Based on next season’s sugar beet price, one fungicide application would be just over 1t/ha of extra beet.

The Lincolnshire trials looked at a one-, two- and three-spray programme, primarily using a cyproconazole + trifloxystrobin-based product Escolta on dates in July, August and September.

“The cost of a fungicide is approximately £25-30/ha plus about £8-10/ha for the application cost, so it doesn’t need much yield to pay for it.” Christine Lilly, Frontier technical manager

Harvest results show using an early application in July as part of a three-spray programme could boost yields by up to 13.9t/ha compared with a two-spray policy.

This translates into extra gross margin of £383/ha, bumping it up to a total of £3,003/ha, highlighting the benefits of tackling the disease early and using extra fungicides.

“It shows the big impact that a very early spray can give with it offering good control on rust,” she says.

Ms Lilly points out that while untreated plots suffered from high disease levels with 90% of the leaves yellow and dying off, those that received a fungicide programme are markedly better.

“Looking at the green area of the crop, a one spray looks to have improved this by 50%, the second 75% and the third an extra 10%

Ms Lilly says canopy retention is key, as keeping the leaf free of foliar diseases such as rust will boost photosynthesis and yield.

She also highlights, a larger canopy protects the crop in colder seasons, from the frost, which can be particularly important if the crop is due to be lifted at a later date.

The three-spray policy also helped push the sugar content of the beet up by 0.7% on the two-spray programme, to 18.1%. This difference was even greater compared to the untreated plot with an additional 1.1% sugar content added.

While a two-spray fungicide strategy remains one of the most cost-effective options, she points out that growers looking to leave a crop in the ground slightly longer may need to consider a three-spray programme.

She encourage growers to consider their varieties and when they are likely to lift their beet when deciding which fungicide programme to opt for.

“Sugar beet remains a very profitable crop and offers the benefits of a spring crop and bringing a different crop into the rotation,” she says.

Alex Theaker of Wellingore Farms explains his 80ha of sugar beet still remains one of his most important crops, offering the best gross margin and a good opportunity to tackle blackgrass.

Based just south of Lincoln on limestone brash soils, he says that spring alternatives such as pulses and oilseed rape cannot match the benefits and profit from sugar beet.

High disease pressure made a two-spray fungicide programme vital last season, with rust prevalent throughout his sugar beet and he plans to use a similar programme next year.

“The crop has been as yellow as I have ever seen it, the disease this year has really been noticeable,” he says.

Growing the varieties Cayman and Pasteur, Mr Theaker began lifting at the end of September and is expected to finish in the coming weeks.

Sugar beet yields have so far impressed, averaging about 76t/ha, while sugar content also exceeded expectations early on, touching 19%, although they have dropped off in the latter stage of the season.

“It has been a fantastic growing season for beet and the rest of the crop looks great. We’ve had little frost and the soil temperatures have been warm throughout the winter,” he says.