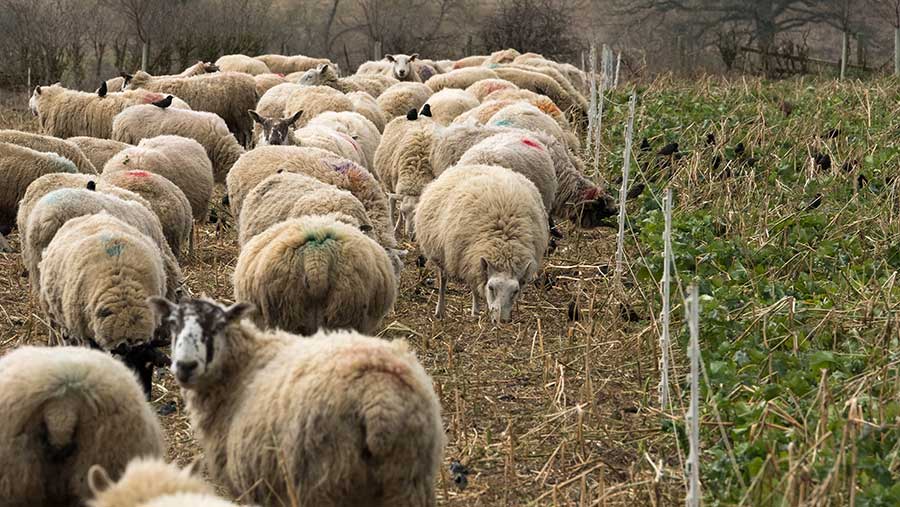 Sheep grazing can be a very effective way of terminating cover crops. However, getting it wrong can lead to problems including soil damage and uneven crop establishment resulting from uneven residues.

Trials at Farmacy’s demonstration site in Lincolnshire have shown that a well-managed grazing regime can effectively remove cover crop residues ahead of spring drilling while returning valuable nutrients to the soil.

Based on their experience running the trials last spring, two Farmacy agronomists highlight three key areas to consider when using sheep to destroy cover crops ahead of drilling.

Farmacy agronomist Rebecca Creasey says that while grazing effectively terminated the cover crops last winter, poaching and shallow compaction around tracks and water troughs was an issue on the heavier soils. This was exacerbated by the site’s high water table.

Careful timing to avoid grazing in very wet conditions and a more intensive, “short, sharp” grazing regime could have helped overcome the poaching issue, she suggests.

Greater use of strip grazing, where sheep are restricted to certain parts of the field until cover is cleared before being moved on to a fresh area, is of particular interest.

“The ideal would be to have more sheep, say 500-600 ewes over the 5ha area for 5-7 days maximum before being moved on, to ensure even grazing without poaching.

“If that’s not possible, strip grazing fewer sheep on a smaller area, say 100 ewes on 1ha, could help get the same effect.”

Careful consideration needs to be given to species and varietal selection for any cover crop mix, especially if planning to graze with sheep, says fellow Farmacy agronomist Alice Cannon.

Buckwheat, for example, is poisonous to sheep, while phacelia is undesirable to sheep although they will still eat it, she says.

“In the past stubble turnips have traditionally be used in grazing mixes, but that won’t necessarily work in a short, intensive grazing system, as there isn’t always enough time for sheep to eat the roots before they’re moved on.”

She prefers a three-way mix based on legumes and cereals.

“Cereals are quick to establish, give good top growth for grazing and have fibrous roots that benefit the soil. Regrowth also provides extra grazing material.

“Legumes offer excellent root anchorage and nitrogen fixation for the soil, and are also a good source of protein for grazing animals.”

Deciding when to terminate cover crops depends on several factors, chief among them being water management, says Miss Cannon.

Leaving cover green for longer allows roots to draw more water from deeper in the soil over winter, although it potentially creates challenges for establishing the following crop, as green surface material needs time to dry out if cover has not been removed by grazing.

In contrast, earlier termination reduces the risk of drilling into a layer of wet, decaying biomass, but can mean the underlying soil is wetter as roots have not been extracting soil moisture for as long, she notes.

There is also the issue of nitrogen lock-up to consider.

Therefore, this nitrogen is not immediately available to the following crop, making it more important to “front-load” fertiliser applications in spring crops, she explains.

“When cover crops have been used for typically five-plus years [exact times vary depending on soil type and health] the nutrient imbalance is naturally redressed, allowing a return to more normal nitrogen timing.

Miss Cannon highlights that nitrogen lock-up is less of an issue when cover crops are grazed, as nitrogen in manure is more readily available.

Growers also have to be wary of potential allelopathy when oats or rye are in the mix, which can delay growth in a following spring barley crop, she says.

“If you’re spraying cover off with glyphosate and have more than 60% cereals in the mix, you need to be desiccating at least six weeks before drilling.”

The grazed areas were both 2.5ha blocks, fenced off with electric fencing, and grazed by 100 ewes over the whole 5ha area. All cover crops were desiccated with glyphosate in early March.