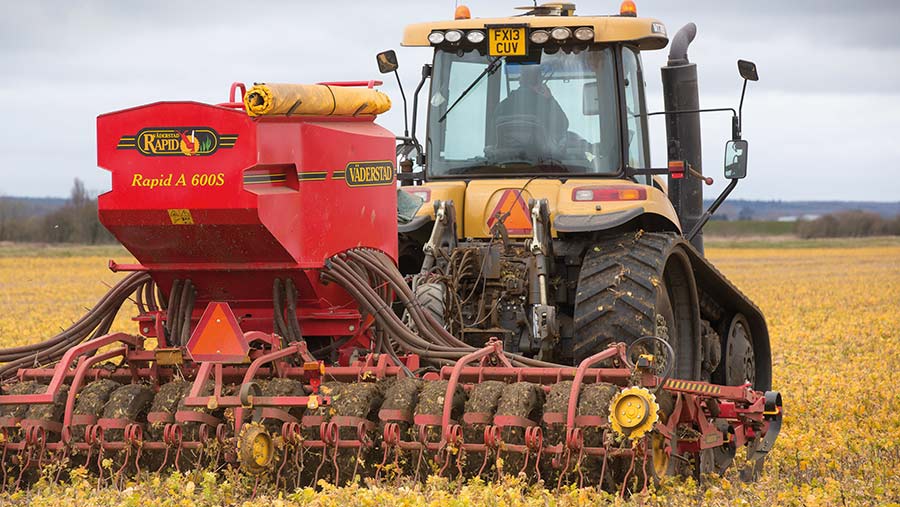 Grow cover crops effectively and they can increase soil organic matter, cycle nutrients, protect soils from erosion and increase profitability. Get it wrong and you may see poorer establishment from in the following cash crop, lower yields and increased weed or pest problems.

Just as with any new technique or system, there is some consensus emerging with experience about what works and what doesn’t, but also some areas where debate is ongoing.

So what are the common mistakes growers can make with cover crops? Hutchinson’s Dick Neale and Agrovista’s Chris Martin pinpoint five key areas that they agree on.

1. Not using through the rotation

Plenty of growers are making cover crops work effectively on farms, stresses Mr Neale. So why are some of them getting it wrong?

One reason is not growing them enough through the rotation, he suggests.

“All of the successful cover crop growers have incorporated them into their rotations, using as catch crops between cereals, or with different species after vining peas or rye for anaerobic digestion when there’s longer to grow them over summer, as well as over winter before spring crops.”

That means nutrients are being harvested and then released back constantly over the rotation, rather than just one year in four, he explains.

If farmers are just growing them one year in four ahead of a spring barley, for example, often not all of the nutrients captured by the cover crop will be released back for the following crop. “Often there is no adjustment for that, and when the nutrients are released in year three, the benefit is not noticed.”

Increasingly, he is suggesting that growers pick four fields where a mini-rotation can be run, to help understand and gain confidence in how to use cover and catch crops through the rotation, before pushing it out across the entire farm.

Cover crops have to be treated as a crop, Mr Martin says. “If you want to get the best out of them, they need the same attention to detail as a regular crop.

Farmers need clear objectives they are trying to achieve, which will determine what species to use and how they will establish it.

“If you’re using cover crops as a tool in a blackgrass situation, then creating the perfect seed-bed to get as much blackgrass germination as possible in the autumn, before direct drilling into it, is important so you don’t get any more germination in the spring,” he says.

Establishment technique is also vital, he says. “There isn’t a right or wrong way – it depends on what you’re trying to achieve and what species you’re using. If you’re using small seeds then it wants to be shallow, and might benefit from broadcasting and rolling them in.”

If farmers are using a cereal, they want to be put in just like a normal cereal, down to 2-3 cm depth, and the same with vetches and beans.

However, that can create problems with multi-species mixes as drilling can be a compromise, unless the drill is set up with multiple hoppers or seeding mechanisms to allow drilling at different depths. “It’s all about attention to detail to get the best results.”

3. Not terminating at the right time

Leaving cover crops in the ground too long before destroying them can make establishment of the following cash crop more difficult and/or lock up nutrients, leading to yield losses.

Both experts suggest typically terminating cover crops being grown before a spring crop in the winter months, with some exceptions.

Soil type is one factor, suggests Mr Neale. “In heavy clay I would terminate by the end of November. The cover crop will move moisture from lower in the soil profile to the surface. If you kill the cover crop off early that moisture will start to dissipate, and open the surface to sun and wind so you’re drying it from the top as well.”

In light sand soils, he says farmers can leave it for longer, as generally what they want in their seed-bed is moisture.

It also depends on the carbon-nitrogen ratio of the cover crop mix, says Mr Martin. “If you have a legume, like a vetch, which has a very low carbon-nitrogen ratio, it will break down and release its nutrients very quickly, so you’ve got more chance of drilling directly into it, or destroying the day before or after.”

Some cover crop species, such as brassicas and buckwheat, can be very sensitive to herbicide residues so careful thought needs to be given to herbicide inputs and timing in the previous crop, Mr Neale says.

“In practice that might mean using sulfonylurea products with less residue, spraying weeds earlier, if you can, and potentially using hormone herbicides, which have earlier cut-offs.”

It also means utilising the previous crop to do as much weed control as possible, for example sowing a bit thicker so there is less reliance on herbicides for control.

Overwinter or autumn cover crops should be established as early as possible, and that means not leaving it until all the combining is finished, suggests Mr Neale.

“Another reason for failure is growers saying they’ll give them a go, and will put them in after finishing combining.” He says that is too late, as it means they are drilling them in September. “Increasingly that is a dry month, and while you can be lucky and get a good strike, often you don’t get good growth.”

Instead, he says, you need someone on the drill or cultivator with a seed box, chasing around behind the combine. “You’ve got to be committed to growing them.”

The further north you are, the more important that becomes, Mr Martin says. “If you get into September in Scotland or even northern England and you haven’t got your cover crop established, you’re going to struggle to get enough growth.”

The jury’s still out

There were two key areas where the two experts disagreed:

Whether to use cereals in a cover crop mix
This is a big area of contention as mixes of oats and vetch are perhaps the industry standard. According to Mr Neale growing oats or rye before a spring cereal is not suitable for UK growers because it can decrease yields in the cash crop. “That’s been established by the AHDB Maxi Cover Crop project,” he says.

One of the purposes of a cover crop is to add diversity into your rotation, he says. “We are largely a cereal-based industry, so why would we want to grow a cover crop that introduces more of the same thing?”

While oats are a break crop to wheat in terms of take-all, Mr Neale says it is still a cereal-based root system and is just not adding enough variation.

But Mr Martin strongly disagrees based on the evidence from Agrovista’s Project Lamport trials, where growing black oats alongside complementary species such as vetches and phacelia, before spring barley, spring wheat and spring oats, has been the highest yielding system seven years in a row, he says.

“The variation from the black oats comes from the extensive root system and contrasting root morphology, and as the project has clearly shown, where we have more living roots, we have more biology in the soil,” he says.

Where other trials have gone wrong when using cereals such as black oats in their cover crops is from destroying them too late, emphasising that attention to detail is critical for making cover crops a success.

“The key is destruction timing. It comes down to the carbon-nitrogen ratio and allowing the nutrients to be mineralised back to the crop.” 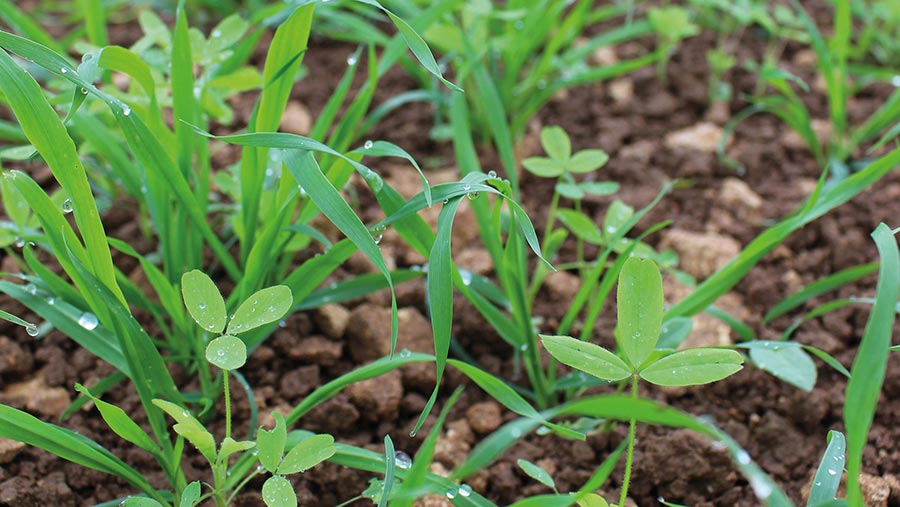 That means destroying the cover crop at least six to eight weeks before sowing, which also allows the soil surface to dry out and for the spring cereal to be direct drilled into it, he says. “By doing that, we’ve consistently had a higher yield than any other cover crop we’ve ever used.”

Black oats is different to tame oats, he says. It has the biggest rooting structure of any species of grass. It goes a lot deeper, it’s more conditioning and is more extensive.

“You only need 25 kg/ha of black oats to get the same conditioning effect as 125kg/ha of tame oats.”

Small-seeded cover crops are less likely to establish further north in the UK, he adds.

“There are only a handful of species that are justifiable as an autumn-sown cover crop – up there you’re looking at a cereal-based approach with rye or oats, which are a bit more resilient in the harsher conditions, plus winter vetches that are a bit more hardy, and possibly phacelia.”

“For example, if you’re growing oilseed rape in the rotation you don’t want brassicas in the cover crop. That can cause you problems with sclerotinia, club root, verticillium and pests like slugs building up.”

The other big problem is letting a cover crop go to seed, and then it becomes a weed. He points to buckwheat as an example: it is a polygonum like knotgrass and can set seed in as little as 10 weeks. “Management is key to not letting anything set seed and cause a problem later on.”

But Mr Neale says that is thinking in a monoculture mindset. “By definition, farming is not a natural process. We tend to grow monocrops, but we should utilise the principles of nature in our rotation, where we can, in cover crops, and stop thinking that growing a legume will encourage pea and bean aphids, or a brassica will promote cabbage stem flea beetle in our oilseed rape.

”You don’t, because of the diversity of plant types you have in there. They cancel out the problems of each other.”