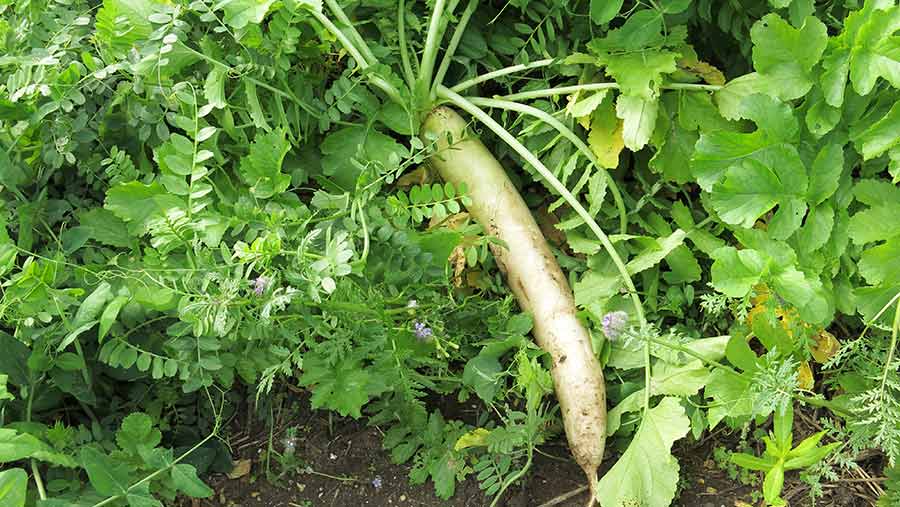 Richard Cobbald is more than doubling his area of cover crops this summer to put structure and organic matter into his “structureless” Norfolk light blow-away Breckland soils.

He aims to drill 200ha of these cover crops to give a good entry to next year’s spring crops and also increase soil fertility on the 3,000ha South Pickenham Estate, where he is estate manager.

A “cheap and cheerful” mix such as oats and vetch is used to provide a cover crop over winter ahead of sugar beet, and more complex mixes for soil improvement ahead of range of spring-planted vegetables.

He tried 80ha of cover crop last season in his first year managing the estate with good results on light land that can wash away in seconds in heavy winter rainfall and can very easily slump and compact badly.

“After cover crops the fields were drier, and following a hard winter there was less ponding on the surface of these structureless Breckland soils,” he tells Farmers Weekly.

Mr Cobbald believes it makes little sense to leave soils bare over the winter with all the problems that might bring such as soil erosion, while growing a cover crop can add organic matter and improve soil drainage. 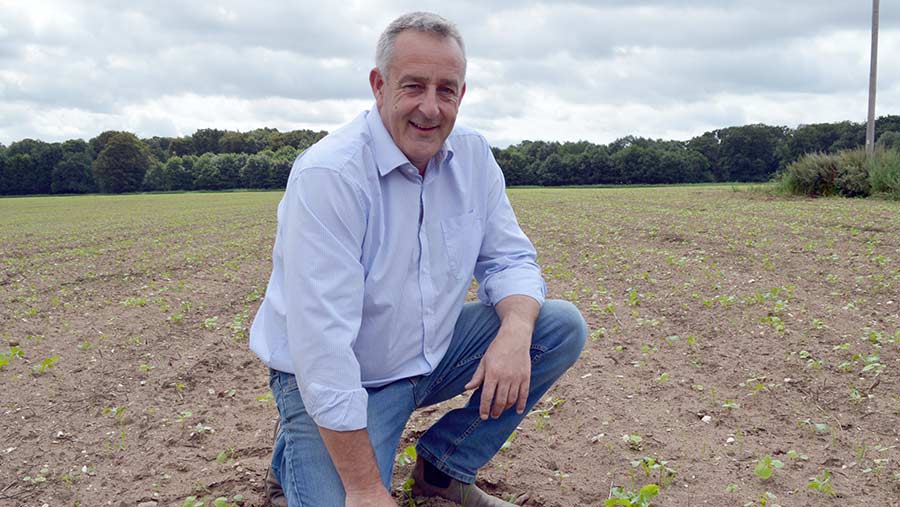 “We see a lot more earthworms in the land after a cover crop and we find we can get on the land much earlier in the season when other fields may still be waterlogged,” he adds.

He is yet to see any clear yield increases after his two years of cover cropping, but expects future improvements as he sees the soils looking much better with more organic matter and earthworms.

The simple oat/vetch mixture is used on his very lightest land ahead of spring-sown sugar beet, vining peas or barley, with the cover crop being sprayed off with glyphosate before spring drilling.

A key part of the estate’s business is renting out about 550-600ha of land for vegetable production, primarily potatoes and onions, but also carrots and parsnips, and providing these crops with water from the estate’s reservoir and bore-holes.

The estate land is growing these vegetable crops one year in every five or six years so Mr Cobbald is keen to get the soil in the best possible condition for handing over for the following year’s cultivations.

Ahead of an intensive run of vegetable crops, he is looking for cover crops to give strong root growth suited to breaking down compacted soils so the follow-on crops can use the ready-made root chambers to explore deep into the soil.

The estate is using a TerraLife-Rigol DT cover crop mix from DSV after its early lifted vegetables, which includes deeptill radish, serradella, flax and sunflowers plus many other species. The mix is claimed to have a root structure ideally suited to breaking down compacted soils

Here, he is using a cover crop mix using deeptill radish, sunflowers and other species, which is drilled  after early lifted carrots before going into a following crop of potatoes or onions.

“This is particularly useful after these early lifted vegetables when we need a tap root to try a give the soil some structure and better drainage,” he says.

The roots from deeptill radish make a big difference to the soil, helping it to drain well as run-off on bare land after harvested vegetables can be significant on this light land, he adds.

The cost of the cover crops varies between £10/ha and £20/ha with the oat-vetch being the cheapest mix moving to the deeptill radish mix at the higher end.

Most of the cover crops are established using a Vaderstad TopDown light cultivator with a Biodrill attached, and this year all the cover crop are expected to be drilled by the first week in September.

“We are building up knowledge about cover crops and know we are putting something back so they  should benefit the soils and eventually yields,” he says.

The summer drought hit yields across the estate so the effect of the cover crops was difficult to assess this summer, but Mr Cobbald remains confident about their success on the farm.

The estate, three miles south-east of Swaffham, consists of about 2,300ha of arable cropping, growing wheat, barley, oilseed rape, sugar beet and vining peas along with the vegetable crops.

In addition, there is permanent grassland and water meadows along the River Wissey grazed by a 600-strong Aberdeen Angus cross Charolais suckler herd and followers. 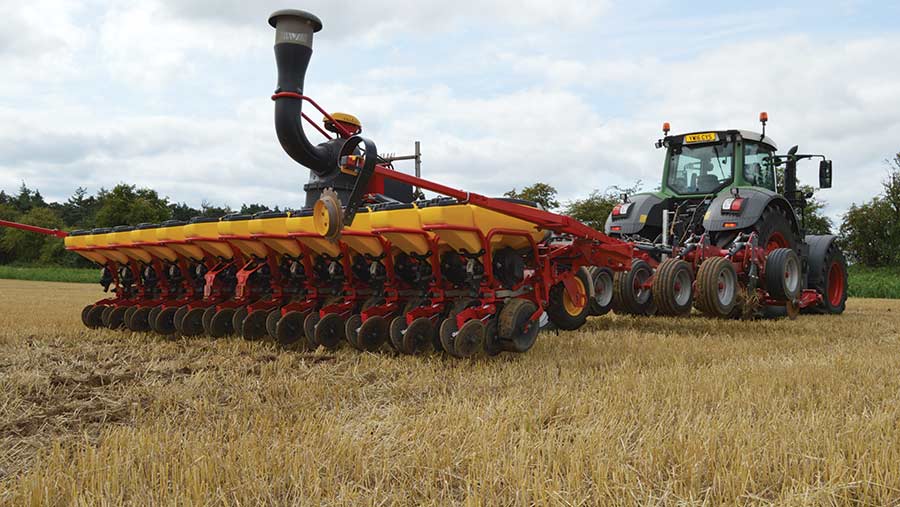 The Norfolk estate is looking to improve establishment on its light soils by switching to strip–tillage for drilling oilseed rape this summer to restrict soil disturbance to a minimum.

James Brown, farm manager at the estate, is trying out the new strip-till technique this summer to improve establishment on the light Breckland soils.

With 250ha of rapeseed to drill, he is using a cultivator with a disc and heavy tine ahead of each drill coulter of a Vaderstad Tempo precision drill this year rather than the min-till approach of the past.

This one-pass system will help cut costs, retain moisture by cutting down on soil disturbance while a seed-bed with fewer clods will  mean fewer places for pests such as cabbage stem flea beetles to hide.

Rain in early August came at just the right time to allow oilseed rape drilling to start and this season’s  crop was all in the ground by 25 August in ideal conditions with the soil “warm to the touch”.