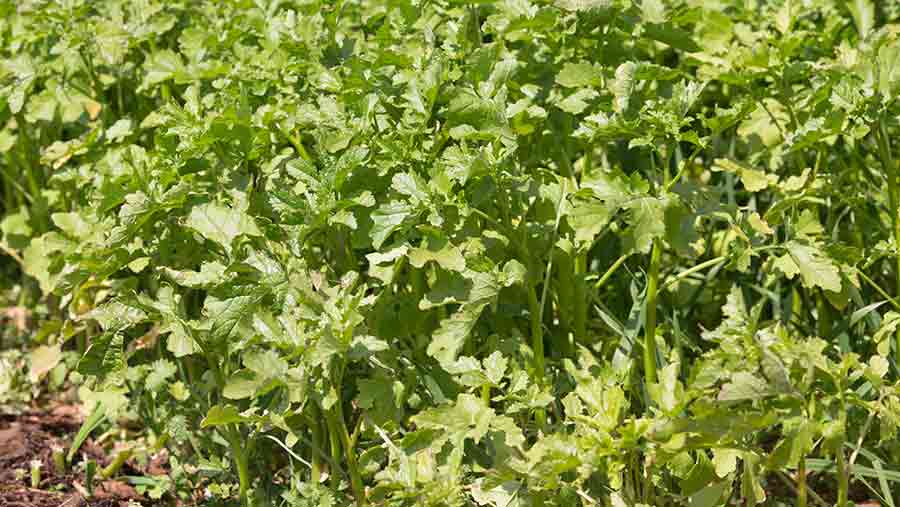 Cover crops are finding a place in many rotations, as farmers look to improve their soil health, however, there are several factors to consider to get the most out of them.

This is especially important when investing in seed, fertiliser, slug pellets, labour and machinery to establish a cover crop.

There are many potential benefits, one being the 25-40% reduction in nutrient leaching loss compared with cultivated soil.

With a shift of cross-compliance emphasis to the prevention of soil loss by maintaining soil cover (GAEC 4), a cover of 30% can also cut erosion losses by 80%.

Organic matter levels are falling in arable soils – a good cover crop can return as much as 10t/ha of its dry matter. This is not as good as organic manure applications, but better than chopping straw.

Glyphosate treatment of multiple blackgrass flushes on an uncropped stubble seems to have limited success in reducing blackgrass numbers where populations are high.

Having a cover crop in place will reduce blackgrass germination purely through crop competition itself.

The longer blackgrass germination can be prevented near the soil surface, the more the blackgrass seed in the topsoil will decline through decay and predation.

In pure swards of oats, black or otherwise, and pure swards of fodder radish, there is some allelopathic control of blackgrass, but treat this as a bonus.

The effect is greatest where the primary cultivation is no greater than 20-50mm, so true no-till direct drilling.

How to establish cover crops?

Establishing a cover crop, like any crop, can be a tricky business, particularly in a catchy autumn such as this one.

Broadcasting seed is cheap, but not always reliable. Drilling cover crops is a more reliable albeit more expensive method of establishment.

Be prepared to treat slugs and apply nitrogen to get crops off to the best possible start.

As a rule of thumb, six weeks is needed to grab as much carbon as possible to produce the maximum top and root growth before the sun gets low in the sky and soil temperatures start to drop away.

Some species are easier to establish than others. Oats, linseed, buckwheat, beans and vetch are fairly bomb-proof. Phacelia, rye, radish, sunflower, peas and clover are trickier.

Having a mix of species in your cover usually results in something growing.

A mix also brings something to the party from each species in terms of rooting depth, nutrient scavenging, beneficial wildlife and weed competition.

There is also a school of thought that a mix reduces the risk of soil-borne disease such as fusarium in pulse species, clubroot and verticillium wilt in brassica species and nematodes in oats, but we don’t have the answer to that yet.

If you are planning a pulse crop in the spring, best leave out the pulse component in a cover crop. Likewise leave out brassicas, oats and linseed if those crops are planned for the spring.

With verticillium wilt becoming more prevalent in oilseed rape, I feel brassica species in cover crops are not a good idea until we have a clearer understanding of the risks.

The decline in the rapeseed area and longer rotations may make this risk less critical.

Another concern I have is that brassica cover crops such as mustards and radish can run to flower and seed quickly in warm autumns, so be prepared to spray them off early.

Also, as oilseed rape growers know, not all brassica seed will germinate in the year of planting, so don’t be surprised to see these species appear in crops further down the line.

When to kill off the cover crop?

For most, the on-farm cultivation equipment and drill type will be the main driver for when to spray off.

Those with true no-till drills such as the John Deere 750 can spray off the day before and drill into what is effectively a green cover.

Disc drills leave slots in unmoved ground. You really need a degree of flexibility and a lot of patience depending on the soil conditions.

No one piece of kit will suit all conditions in all seasons – not what you want to hear when trying to keep machinery costs down.

Some species are difficult to kill off with straight glyphosate, so expect to spend a bit more when you spray off and don’t skimp on rates.

A good, hard frost can do most of the work for you. However, our continental cousins have harder winters than us, so be careful about claims of which cover crop species will be killed off in a frost.

Grazing off with sheep is another option and generates useful income by fattening lambs or through a headage payment from a neighbour.

Sheep are a useful way to recycle the top growth of the cover into organic manures with readily available nutrients.

However, their feet can do a lot of damage to topsoil structure in wet soil conditions, so the grazing has to be at a low stocking density.

I have seen cover crops retain topsoil moisture in a wet spring, making cultivation/drilling difficult, and completely dry seed-beds out in a dry spring causing poor establishment, so again there is no easy answer.

How does it affect soil biology?

Having a green cover in fields all winter does encourage all sorts of vertebrate and invertebrate wildlife, soil bacteria and fungi, which is great for soil life. Unfortunately that also includes slugs and snails.

In time it is suggested that predators will sort out those soil pests, but I am still waiting on farms where cover cropping has been in place for a number of years.

When are soil nutrients released back from the cover crop?

This is work in progress by researchers. Different crop species give it up at different times. I think we know that a mustard crop is particularly poor in giving back the nutrients it has mopped up.

The thick woody stems of a well-developed mustard crop take an age to break down. Another reason not to let mustards get too big.

Legumes are relatively slow to give up nitrogen once killed off. Chopping the cover crop into smaller pieces will speed up the process, but that is another operation, another set of wheelings and another cost.

Burying all that organic matter with deeper cultivations or ploughing will still have some benefit, but not as great.

The future for cover cropping?

In time I see cover cropping predominantly as a vital part of no-till/strip till direct drilling where capturing carbon to build organic matter, stabilising topsoil structure and keeping nutrients in the top 20-50mm is integral to the system.

How many farms will adopt that system in an attempt to drive costs down remains to be seen.

The success of no-till systems to culturally control grassweeds with a shrinking chemical armoury will have a large bearing on the uptake and longevity of no-till. But that is an entirely different subject.