Heavy land growers wanting to put a serious dent in their blackgrass burden must turn to spring cropping and consider direct drilling – that’s the top message from Project Lamport this year.

Now entering its third harvest, the Agrovista and Bayer joint trial is focused on cultural blackgrass control methods on heavy land in Northamptonshire.

The five-year rotational project uses a heavy clay loam field, which started off with about 2,000 blackgrass seeds/sq m, as the weed control battleground.

Mark Hemmant, Agrovista’s technical manager, explains continuing with the field’s old rotation of first and second wheat followed by oilseed rape as a break crop was no longer viable.

Arable reporter Oli Hill tours the trial with Agrovista’s Mark Hemmant to discuss the successes and failures in controlling blackgrass this year.

“The blackgrass problem here was just getting worse and worse with resistance issues coming in. Carrying on as normal was not an option.”

To make matters worse the predominantly warm and wet season has been ideal for prolific blackgrass growth, with notably larger weed seed heads being reported by growers.

He adds that the wet spring has also made drilling and spring crop establishment “very challenging” this year.

“We have still had success despite the wet conditions,” he says.

“This project is so interesting and exciting because it is looking at agronomy rather than solutions from a can.”

Agrovista designed a cover crop mix to try and dry the soil out to aid direct drilling heavy land in the spring.

This cover crop mix was drilled at a low seed rate of 25kg/ha to create a fairly open cover early on, as this allows the blackgrass to grow.

The idea is that the cover crop bulks out later on to give good overwinter ground cover.

“Predominantly black oats and vetch were used in year one of the trial and we saw fantastic results compared with fallowed plots of both spring and winter crops,” he notes.

“Cover crops don’t control blackgrass, they encourage blackgrass to grow and that is what we want.

“Cover crops are about keeping the soil in good condition for spring drilling to tackle blackgrass.”

The overall aim is to get the blackgrass growing outside of the cash crop, rather than in it.

Cover crop roots are retained in the soil after it is sprayed off, helping to minimise soil disturbance and therefore stimulating less weed germination.

Ferric phosphate slug pellets were routinely put down to cope with the issue of slugs in cover cropped areas. 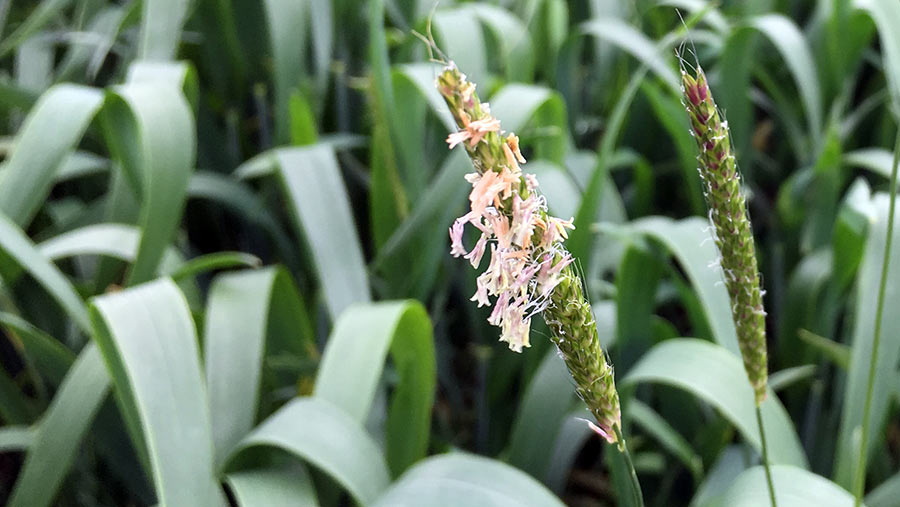 Spring wheat was drilled at 500 seed/sq m for high competition, and now seed rate of up to 550 seeds/sq m are being considered as the crop is less competitive than spring barley.

High competition is essential to stop blackgrass filling even the smallest of gaps in the crop.

“There has been very little agronomy done on spring wheat and we are trying different seed rates at 550 and 600 seeds/sq m, not the standard 350 seeds/sq m used on light soils.”

In previous years direct drilled spring wheat has normally been sown on the trial in mid-March, but this was delayed until 11 April due to wet conditions.

However, on plots where the cover crop was dessicated in November as opposed to a few weeks before spring drilling, it was possible to direct drill in mid-March.

“This is due to the cover crop mineralising nutrients and having this more readily available at crop drilling,” says Mr Hemmant.

This was seen in a 0.5t/ha yield benefit because blackgrass was better controlled and the cover crop roots remained to give good soil structure and nutrient availability.

Mr Hemmant advocates early cover crop destruction between November and January, dependant on when it might be possible to travel on the land.

He adds that 90kg/ha of nitrogen fertiliser was applied to all spring wheat plot at drilling to help get it growing quickly.

He stresses using cover crops is not a substitute for this, but they will bring extra benefits.

Previous yields on project’s spring wheat have ranged from 8.2-9t/ha, compared with the 7.5t/ha yielding winter wheat that was condemned by a stifling blanket of blackgrass. 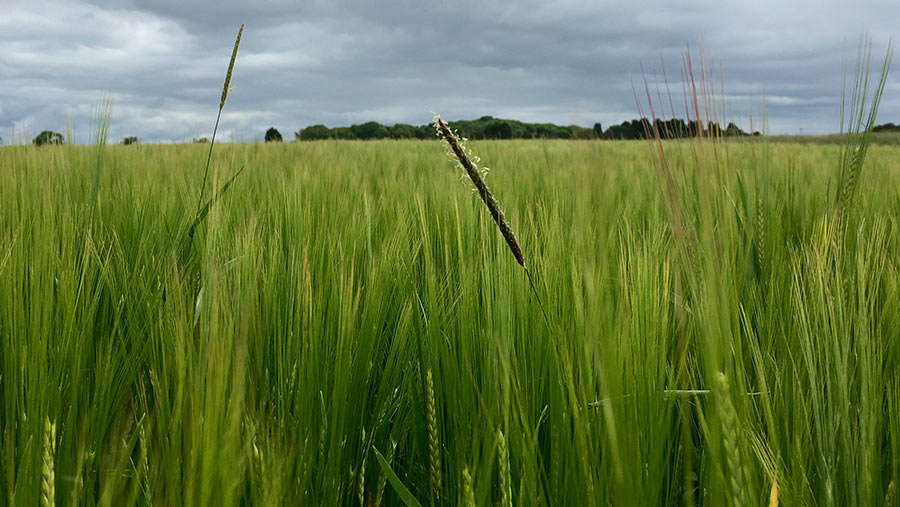 For the first time this spring, barley was direct drilled at Project Lamport with good establishment of a promising crop.

“There is more money in spring wheat, but spring barley is more flexible in terms of drilling date.

“This year we drilled spring barley after a cover crop on 11 April. It gets out of the ground quicker and covers the ground better than spring wheat,” notes Mr Hemmant.

The crop was drilled at 450 seeds/sq m with a stiff-strawed variety being chosen to mitigate the hightened risk of lodging from such a generous seed rate.

Mr Hemmant says he now wants to up the spring barley seed rate to 500 seed/sq m or more to maximise the competitive nature of the crop and test the limits.

The trial will also examine how such a high seed rate could impact on grain size. 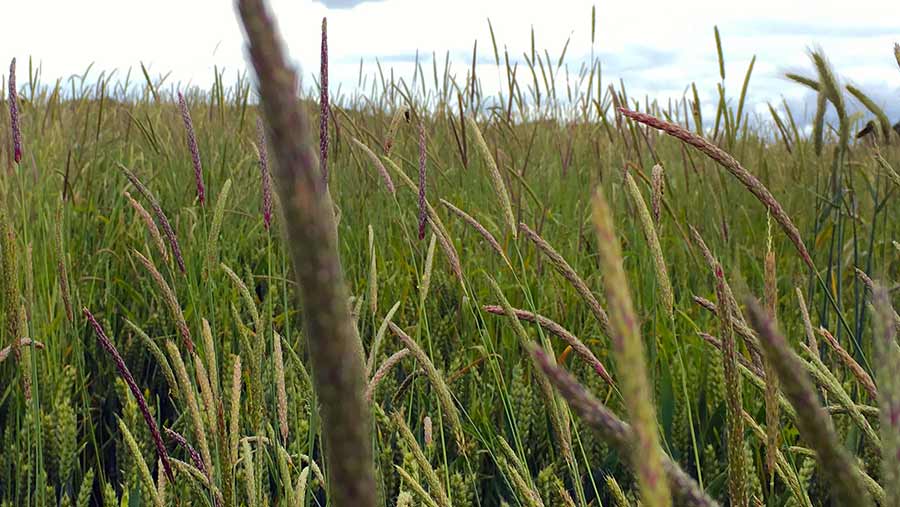 This year a strip of the project is dedicated to really hammering home the fact getting rid high levels of blackgrass is not achievable in just a few seasons.

The plot used to demonstrate this was returned to growing winter wheat last autumn after only two years of spring cropping, with visually staggering weed pressure as a result.

“You can’t go to a spring crop to clean up and then just go back to what you were doing before – it could be 10 years or more before you can do that,” warns Mr Hemmant.

“If you go back too early you risk years of hard work being undone in one season.”

Mr Hemmant recognises some growers are still less than keen on the thought of spring cropping vast areas of their land and acknowledges that direct drilling into a decaying cover crop can appear messy at first, with visible slots sometimes left by the drill.

“But come summer it does look much better and you’ve successfully controlled your blackgrass,” he says.