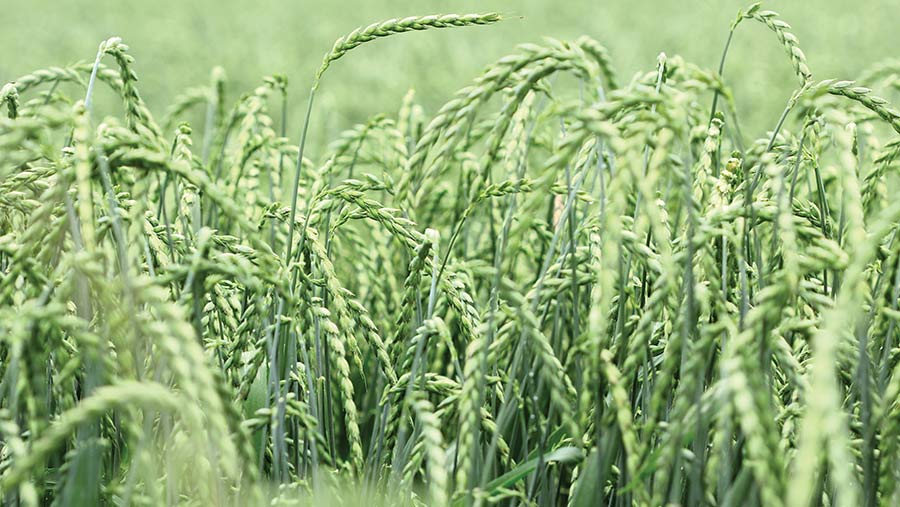 Cleveland farmer John Aynsley has seen soil health improve by successfully adopting direct drilling as part of his three-year stint as an AHDB Monitor Farm in the North East.

He has also seen success in tackling a serious sterile brome infestation on his farm, near Saltburn.

Pip Robson, who farms near Alnwick, is now taking on the Monitor Farm role in the North East and his aim is to reduce his carbon footprint. Farmers Weekly takes a closer look. 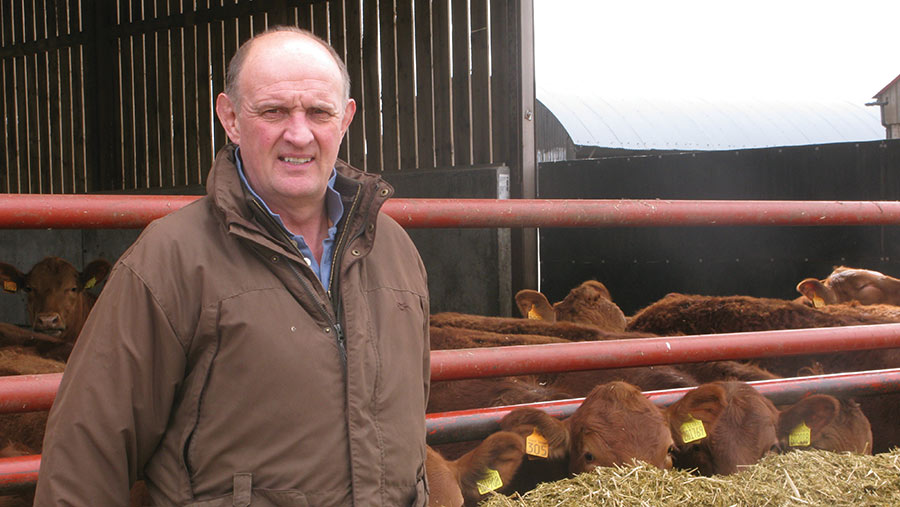 Farm manager John Aynsley had three main aims when he became the host of the AHDB’s Saltburn Monitor Farm in 2017.

“It was clear when I first came here that things had to change,” says Mr Aynsley. “So I had already started working with a soil consultant and using benchmarking to look closely at our costs.”

One of the main challenges he faced at the outset of the Monitor Farm project was whether he could make direct drilling work, without reducing profits.

Having already reduced tillage depth from 25cm to 10cm with the farm’s min-till system, the next stage was to introduce direct drilling – something he describes as a big step.

Having committed 106ha of poor, wet ground that had previously been in continuous wheat to the project, he bought a second-hand tine-based Horsch CO6 drill fitted for direct drilling.

The first year saw him introduce cover crops and winter beans, both of which were successful and showed him what could be achieved.

Three years later, Mr Aynsley is pleased with the progress he has made. Soils have improved and he has a clearer understanding of what needs to be done.

“Getting the calcium-magnesium balance right is essential in these soils, which are high in magnesium,” he explains. “If that isn’t right, it’s like working with wet plasticine.”

As a result of his intervention, soils are notably more friable in the top 10cm, helped by early drilling and using high seed rates.

“That might seem strange and against popular advice, but getting the crop in and a good root mass developing in the ground helps with filtration,” he notes. “We don’t have nearly as much water lying around as we used to.”

He admits that he’s had to learn to stop doing the wrong things. “We now don’t go into the field if we shouldn’t be there. Once the soil starts sticking to the wheels, we have to get out. That’s a tough discipline.”

Wheat yields have not suffered with the use of direct drilling, with the number of heads/sq m remaining the same, even with the difference in row widths.

“Direct drilling works,” he says. “It’s a mindset thing – if you want it to work, it will.”

Sterile brome control is improving, but the weed hasn’t been conquered fully.

“We’re learning how to manage it with a different rotation and the help of glyphosate. Using cover crops before winter beans, or a cover crop before spring barley and then beans has shown it can be done.”

The rest of the estate was in a three-crop rotation of winter barley, oilseed rape and winter wheat, all of which was min-tilled.

He is now moving to a five-crop rotation of winter barley, oilseed rape, winter wheat, winter beans and winter wheat.

“Profitability will always be a challenge, whatever Brexit and new agricultural policy brings,” he comments.

“However, things have improved on this farm and I am confident that we are on the right road.” 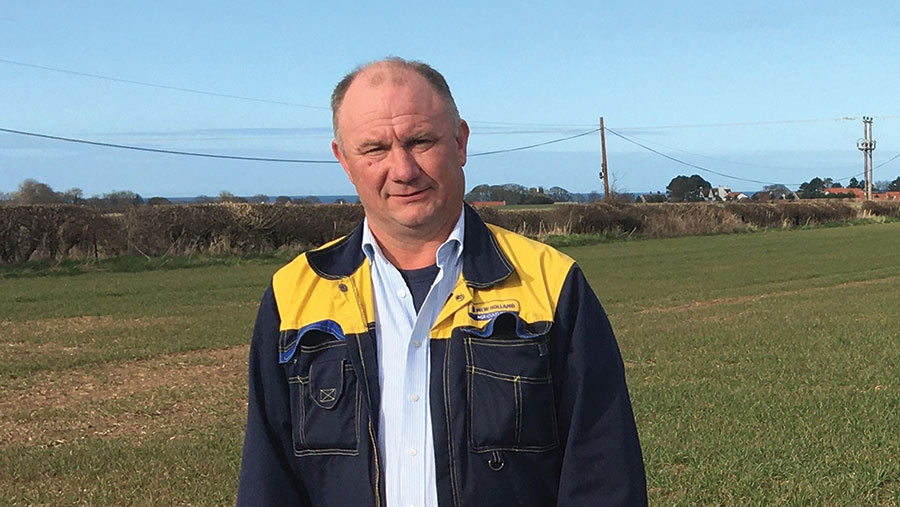 A better understanding of how carbon is recycled on his mixed, integrated farm is a key aim for Pip Robson, as he starts three years as the host of the AHDB’s new Chathill Monitor Farm in Northumberland.

Having the facts and figures behind carbon footprint calculations and some evidence of the contribution that farming can make to solving climate change is important, he believes.

“We have both cattle and sheep on the farm, which are often depicted as producers of greenhouse gases. But they graze the grass, which helps to offset emissions and allows carbon to be captured and stored in the soil.”

As the farming industry has set itself the challenge of being carbon neutral by 2040, it’s vital that farmers can show they have some of the solutions, he adds.

Facing a future without support payments is another topic that Mr Robson hopes to address as the Chathill Monitor Farm meetings get underway.

Dealing with uncertainty is something Mr Robson has been doing ever since he took over the family business, and he now runs an integrated and diversified 800ha mixed farm, with multiple revenue streams.

As well as his livestock and arable enterprises, he has a contract and share farming business, a straw pelleting plant and a civil groundworks division. Haulage is another activity, which allows him to run a lorry at harvest.

“All of our grain is stored and marketed by Coastal Grains at Belford, which is within 10 miles of the farm,” he explains.

“We only have temporary storage on the farm, so make use of chaser bins and the lorry to get grain moved at harvest.”

Mr Robson would prefer to see any future support given to farmers take the form of productivity grants, so that funds are distributed throughout the rural economy rather than ending up with those that own the land, rather than farm it.

“If you have to spend to get it, the money would help rural communities and productivity would increase,” he points out.

With 480ha of arable cropping, Mr Robson grows soft wheats for the premium biscuit market on contract to United Biscuits, winter barley for feed, winter oilseed rape, spring pulses and spelt, with seed potatoes grown by a third party and temporary grass included in the rotation.

“We try not to grow second wheats,” he says. “Having grass in the rotation helps with that.”

Break crops at Chathill include spring pulses and winter oilseed rape, with the latter continuing to perform well on the farm and in no danger of losing its place.

“Providing we can get it established quickly enough, oilseed rape is the best break crop and we won’t be dropping or reducing it,” he reports. “Having winter barley in the rotation provides the early entry for oilseed rape.”

Both hybrids and conventionals are grown, with more emphasis being put on conventionals for 2021. Yields were about 4.5t/ha last year, with Aurelia doing more than 5t/ha.

“We’re not troubled by flea beetle in the way that growers further south are. Let’s hope that remains the case.”

The low-gluten ancient grain spelt is being grown on an experimental basis for the third year running on more marginal land, also on contract through Coastal Grains.

Most of the farm is min-tilled, but Mr Robson’s contracting business means that he has a range of cultivation equipment, which gives him flexibility.

“We are in the fortunate position of being able to react to the situation and the conditions.”