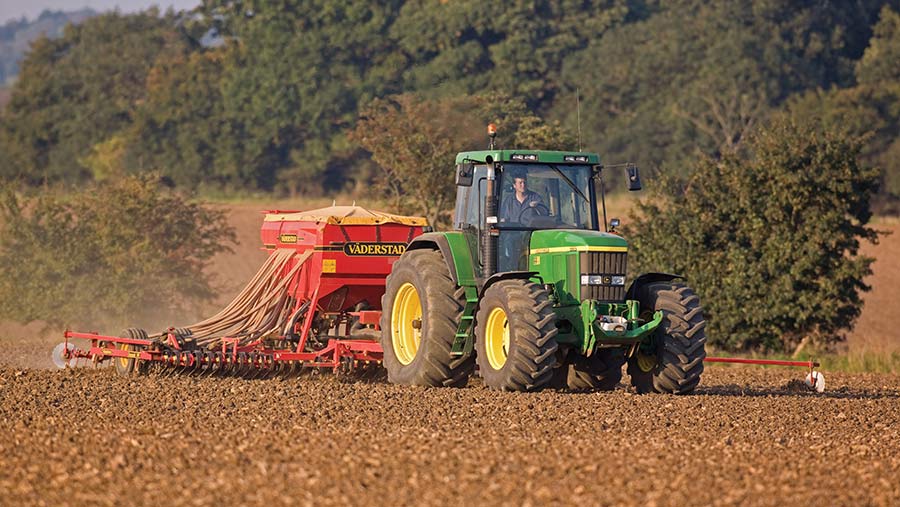 The best time to drill winter wheat can vary, whether you farm in England or Scotland, as delayed drilling is often advised south of the border, while the earlier the better is often the rule further north.

Farmers Weekly talks to a leading agronomist in England on the cost savings growers can make from delaying drilling, and we see what experts in Scotland say on early sowing.

England – the case for delayed drilling

Delayed drilling of winter wheat can save growers about £30/ha in herbicide and fungicide costs with negligible impact on harvested yield.

Although many wheat growers will be eager to drill early after the wet autumn in 2019 saw the area of wheat drilled fall, experts warn over the extra costs of early drilling.

“Growers should not be farming for last year, so we are encouraging them not to rush into drilling this autumn just because of one year,” he tells Farmers Weekly.

Mr Thornton is advising growers to leave drilling until 10-15 October for most of England, although areas further north without blackgrass problems may need to drill earlier before a harsh winter.

The delay will allow more time for the creation of stale seed-beds to control grassweed by cultivations or spraying and give residual herbicides more chance to work.

These herbicides applied later will work better in cool, wet soils such as in October, while later emerging crops will miss the main aphid pressure and not be so lush and forward and so will attract less disease.

The group used data from its nationwide group of growers to show that after the last wet autumn of 2012, farmers were forced to drill, on average 10 days later, from 2 October to 12 October.

This allowed growers to save £10/ha on herbicides, bringing winter wheat weed control down to £80/ha, while the fungicide spend was cut £20/ha to £90/ha.

Mr Thornton points out that there was no statistical difference in the yield between the 2012 harvest and the enforced delayed drilling that lead to the 2013 harvest.

As for variety, he says most wheats are suitable for the middle drilling slot in October, but for those that do decide to go early in September, they should chose a slow-developing variety with good disease resistance.

For this September drilling slot, he suggests Graham, Siskin – although it can be a touch weak in the straw for ultra-early drilling – and newer varieties, such as Theodore and Extase.

For the later drilling slot into November, he says early-developing varieties with disease resistance are important, but not quite as critical as for the ultra-early drillers.

Here, he suggests the old faithful milling variety Skyfall – which can be drilled into the first week of March – along with fellow miller Zyatt and new varieties Saki and Insistor.

He points out that the risks are huge of drilling early as wheat crops can quickly turn to loss-making ones with extra inputs and declining yields.

In the past, growers could drill early because they had the neonicotinoid insecticide seed dressing Deter (clothianidin) to protect against aphid-spread BYDV and there were more sensitive populations of blackgrass, which were easier to control.

“If you drill later, you can maintain yields and herbicides will work better,” he says.

If growers are unable to control blackgrass that will lead to problems in the rotation and they may not be able to continue with winter cereal crops.

On a positive note, north Lincolnshire grower Mark Stubbs won the highest-yield prize in the Adas-organised Yield Enhancement Network in 2019 with a 16.3t/ha crop of Siskin wheat – drilled late on 4 November.

Scotland – the value of early sowing

Scottish winter wheat growers are being urged to look at three varieties with slow development and good disease resistance if considering early drilling.

Experts at crop consultants Scottish Agronomy suggest looking at Sundance, the new variety Saki and Revelation as the best for early autumn sowings in September.

Greg Dawson, deputy managing director at the group, says Scottish growers sow early to achieve good establishment before the onset of winter, although there are increased risks from diseases, pests, grassweeds and lodging.

“Many Scottish growers are looking to drill early to spread the work load and improve establishment,” he says.

One criteria in choosing early drilling varieties is their speed of ear development in the spring, as varieties that are fast developing have a greater risk of floret infertility, where late frost can damage the developing grain sites.

So they looked at slow developing soft-milling feed wheats suitable for Scotland such as Sundance, Saki, Barrel, Jackal and Revelation.

Older varieties that also suit this slot include Claire.

By choosing one of the above, growers may reduce the risk of ear damage, but they could increase the risk in other areas, such as disease, as sowing varieties early will lead to higher disease pressure.

So the consultants suggest choosing a variety with good disease resistance.

Unfortunately, this instantly reduces a grower’s choice by 50% as Barrel, Jackal and Claire are all highly prone to septoria, and yellow rust in the case of Claire.

Sundance and Saki are significantly cleaner, but early sowings also raise other issues in terms of plant growth regulation, and these two varieties need watching as they are not the stiffest strawed, especially Sundance.

On the AHDB Recommended List, Sundance scores a 6 for straw stiffness, with Saki and Revelation on 7s, compared with the stiff-strawed Skyfall on an 8, in a 1-9 scale, where a high figure indicates varieties show characteristics to a high degree.

Therefore, Sundance in particular is more likely to need a plant growth regulator treatment at the T0 fungicide timing in early spring.

All three score top 9s for yellow rust resistance and 6 and above for septoria, but disease control could still be challenging in early spring with yellow rust.

In coastal areas, aphid-spread barley yellow dwarf virus (BYDV) may be more of a problem with no effective chemicals treatment now neonicotinoid seed dressings are banned

In addition, all three are late maturing to harvest, a particular concern in Scotland, with Saki and Revelation three days later than Skyfall and Sundance two days.

Revelation is also an older variety and does not stand out for its yield.

So the advantages of early sowing in Scotland are clear in terms of spreading the sowing workload, staggering the harvest period, increasing yield potential, reducing seed rates and a more competitive crop against spring emerging weeds.

But these need to be considered against the negatives.

These include a potential increase in fungicide and plant growth regulator spend, increased risk from BYDV and yellow cereal fly larvae damage and potential problems from grassweeds such as bromes.