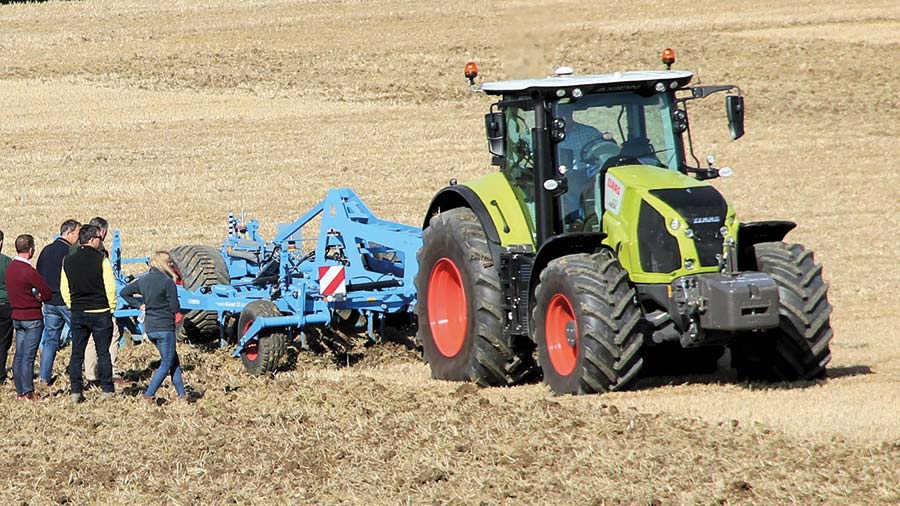 Lincolnshire grower Andrew Ward is looking to further drive down establishment costs with reduced tillage, after carrying out a successful cultivation trial investigating shallower workings on his heavy clay soils.

Well-structured soils created over the past 12 years using deep cultivation techniques to a depth of 200mm now mean that shallower passes and even direct drilling are possible, with no detriment to crop yields.

Mr Ward aims to save on fuel and labour costs with his ultimate goal of direct drilling 40% of crops on his clay soils.

Rather than investing in shiny new pieces of machinery – upwards of £70,000 for a new cultivator or £100,000 for a direct drill – Mr Ward hopes to tweak existing farm machinery to deliver the benefits of reduced cultivations, while creating a flexible and diverse approach to cultivation choice.

They hoped to answer the question: Can we successfully use shallower cultivations on heavy clay soils?

Steve Corbett, trials manager at Agrii, explains how the team sought to find the farm’s ideal establishment technique through comparison of the different cultivation machines and depths.

The 10 cultivators were compared with Mr Ward’s current establishment method, a 5.5m Simba Solo disc-tine-press cultivator working at 200mm deep, which was used as the control.

Soil structure and moisture level assessments were taken in the autumn and spring for each machine, assessing the top 50mm and middle 50-150mm of the soil profile and scored out of a combined total of 80.

The field was then sown to spring barley (variety Laureate) at right angles to the wheat stubble cultivation and taken to yield using Mr Ward’s current Simba Freeflow drill.

This allowed the trials team to analyse the cultivation methods and calculate the all-important gross margin (see table below).

Mr Corbett believes the results demonstrate that shallower cultivation, saving time and money, is possible on the farm without any detriment to yield.

He highlights that moving towards a min-till or direct drilling system is not a quick process and that soils must be in good heart to do so successfully.

“My gut reaction is that soil structure throughout the profile is in good condition,” he says.

“Careful examination shows that we can certainly achieve shallower cultivations at this point.

“However, close monitoring each season will be needed before making that decision on a field-by-field basis.”

In fact, it was Cultivator A, a disc cross cutter with light press running at the shallowest depth of 50mm, which gave the highest yield of 8.13t/ha and the top gross margin of £999/ha. 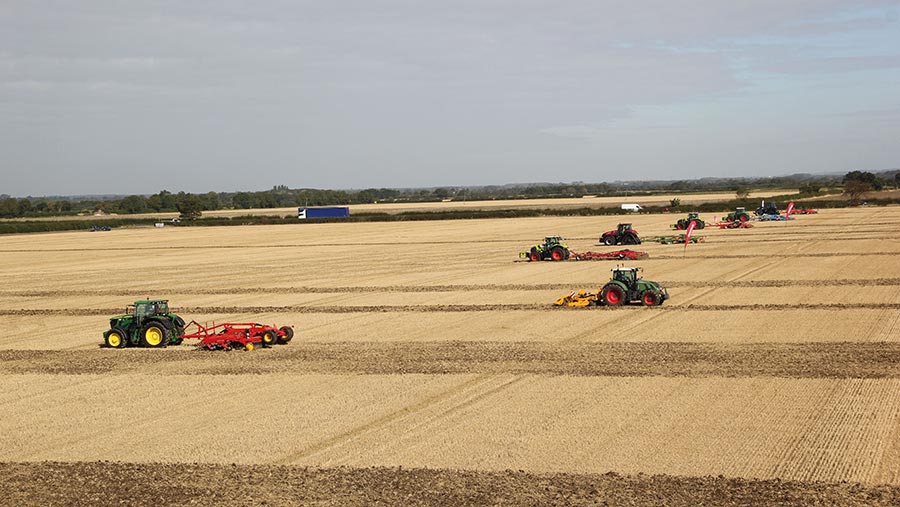 Mr Ward admits, however, that the front tines on his Freeflow drill work slightly below the 50mm mark within the soil profile, causing some soil disturbance beneath this depth.

Overall, gross margins generated by the different cultivator passes ranged from £857 to £999/ha based on Mr Ward’s grain price of £163/ha.

Cultivator I, a deep tine press unit running at a depth of 175mm, produced the lowest gross margin, about £100/ha less than the control, despite having the highest overall soil rating of 45.

Given the large capital investment when buying new machinery, Mr Ward aims to modify his existing kit to reap the benefits of reduced cultivations.

He believes the machine which holds the answer to this, is a custom built experimental Elita cultivator based on a 6m Simba Solo with modified low disturbance tines, which was also trialled.

The machine was built in 2013 by independent cultivations expert Philip Wright for establishing oilseed rape. However, this year rapeseed has not been grown on farm for the first time since 1984 and Mr Ward now hopes to give this cultivator an alternative use.

“The Elita is a step away from our current strategy, acting as a bridging piece of kit from the deeper Solo cultivator towards direct drilling.

“It is very low disturbance, working at 175mm with the potential to run at 100mm if conditions allow,” he explains.

The shallower pass will reduce establishment costs by £15.71, including a fuel saving of 6.7 litres/ha compared with the Simba solo with additional benefits of improved ground cover, work rate and carbon emissions.

Mr Ward hopes to establish three separate cultivation techniques – deep, shallow and direct drill – which will give him the flexibility to tailor cultivations to the soil, crop and season.

“The free flow drill is a very capable direct drilling unit. We successfully direct drilled a 20ha trial field of spring barley last spring which yielded the same or better than the cultivated fields,” he says.

However, he admits that direct drilling into winter wheat stubble may not be appropriate, as straw biomass layers can block the drill.

This spring, Mr Ward plans to plant spring beans with the Freeflow, prior to a pass with the Elita cultivator.

He will then direct drill winter wheat the following season, meaning he can remove an entire cultivation pass.

“This is going to be a massive saving. We’re taking out a whole cultivation operation which will save us in excess of £60/ha and aim to direct drill at least 40% of our crops eventually,” he says.

Setting up the soil

The cultivation event near Leadenham in Lincolnshire was made all the more challenging by noticeable harvest traffic damage after 130mm of rain fell in just three days over the summer.

A further 10mm fell just before the event, leaving the soil below 20cm on the edge of practical workability.

In these nearly “plastic” soil conditions, entering the soil with the wrong shape tine or at the wrong angle could negatively disrupt soil structure. This is why he suggests the first tool to hit the soil after harvest is a spade.

Agrii’s Steve Corbett says: “Rather than breaking up the soil into smaller aggregates, this could smear the soil and seal it, preventing water infiltration through the soil profile, mirroring the effects of mole draining. Several operators on the day missed the plastic soil layer, which caused smearing and waterlogging.”

This is why machine setup on the day is as important as machine type to prepare heavy soil ready for the spring.

Mr Corbett says: “Heavy ground for spring sowing needs to go into the winter both weatherable and weatherproof as well as compaction free and bacterially active.”