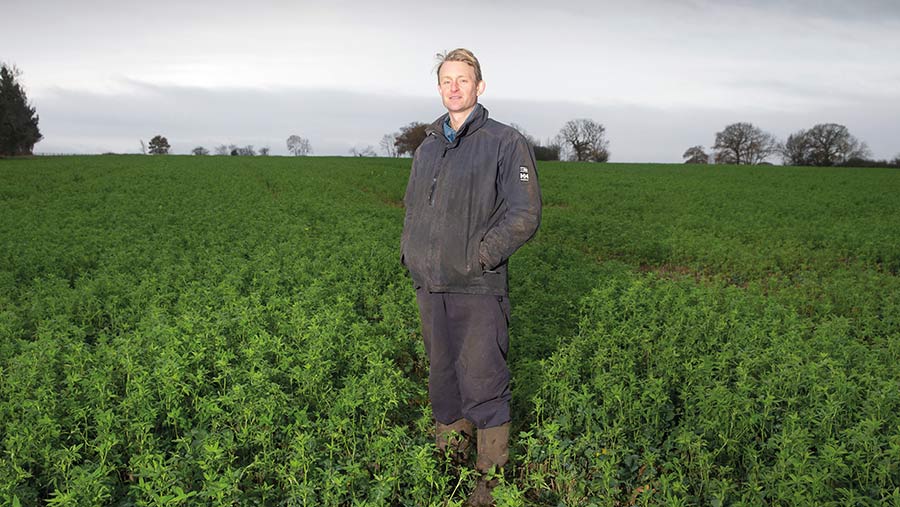 A reduction in income reaching £232/ha by the time Basic Payment Scheme payments are phased out in 2028 has served as a catalyst for Max Chenery to push the 800ha Whatton Estate Farm towards a lower input, regenerative management approach.

“If we lose our subsidy and it is not replaced by anything or nothing likely to provide as much direct income, we have to reduce our costs,” he says.

Without any major diversifications, the farm relies on production from 640ha of arable crops – mostly wheat, including spelt, oilseed rape, and winter and spring beans – and 135 Limousin and Belted Galloway cows plus followers. The remaining 160ha is split between woodland and permanent grass.

Mr Chenery’s interest in regenerative systems was sparked by reading about Pete Iannetta’s research on the role of nitrogen fixation in legume crops at the James Hutton Institute. “I sent him an email and he kindly rang me back and we ended up talking for two hours.”

That led to contact with Scottish farmer Douglas Christie, who farms using regenerative agriculture principles, and an introduction to Base UK (Biodiversity, Agriculture, Soil & Environment), an organisation helping farmers learn about the approach.

It was a key moment, says Mr Chenery, as his establishment regime was a deep cultivation with a Simba Mono post-harvest, before drilling with a Horsch Pronto. Moving to direct drilling would save him at least £100/ha, but locally there was a lot of scepticism about whether it would work on his soil type, which includes areas of heavy clay.

“I met a group of farmers who were succeeding on all sorts of soils all over the country,” he says.

That gave him confidence to buy a second-hand Horsch CO8 tine drill in February 2018 for £10,000, which was already converted with one-inch narrow openers to reduce soil disturbance, and a homemade liquid fertiliser set-up.

The low cost was important, Mr Chenery says. “If you don’t know if the system is going to work you don’t want to spend £70,000 to £80,000 on a drill. It seemed the cheapest, lowest risk way to get started. 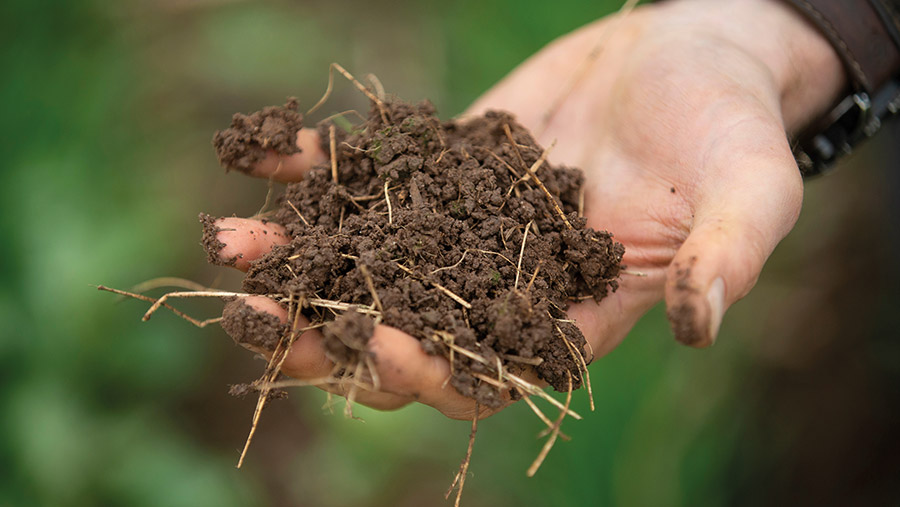 “Everyone I spoke with at Base UK also recommended getting a tine drill to start with as it does create some tilth, and mineralise and release a little bit of nitrogen, which helps when you are converting.”

The exception is where blackgrass is a significant issue, he suggests, where a disc drill with lower disturbance would be an advantage from the start.

A disadvantage of the tine drill is that it is limited when drilling into big cover crops – a 50:50 mix of linseed and mustard had to be flailed before it could be drilled into with the CO8, he notes.

That means purchasing a disc drill isn’t too far away, he suspects. “It will give a bit more versatility, especially with cover crops. We’ve had a Weaving GD on demo, while the John Deere 750a seems to be what a lot of growers have moved to.”

Cover crops this season are relatively short on the ground, as Mr Chenery seeks to maximise his winter cropping area following the difficult 19/20 season, but along with the linseed/mustard mix, a black oats, phacelia and vetch mix was used before a spring bean crop last spring, which is now in winter wheat this season. “They’ve worked well, and I can see a benefit to the soil,” he says. 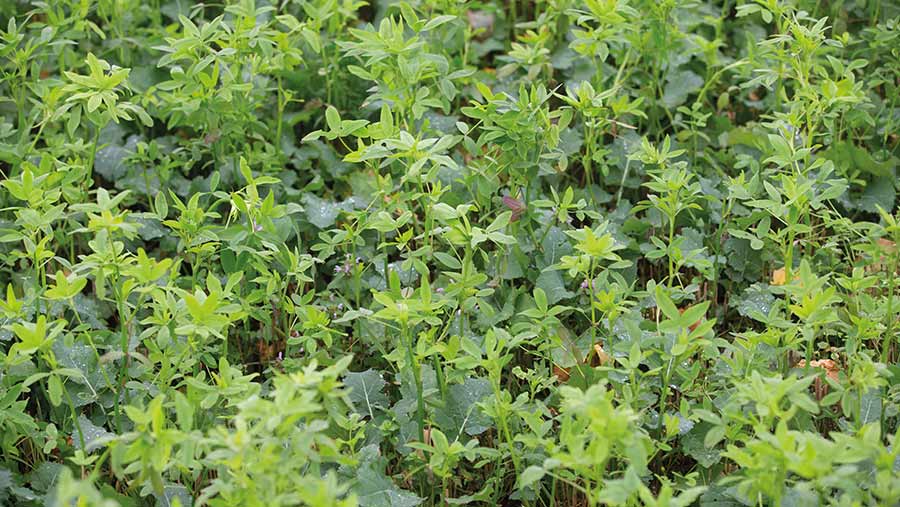 But with spring cropping not always easy to establish successfully on heavier soils, he is experimenting with ways to incorporate cover crops into his predominantly winter crop rotation.

“I want to try direct drilling mustard straight after combining, before drilling winter crops into it in October, and also experiment with autocasting off the combine or into the standing crop.”

Seed cost is a concern with cover crops. He doesn’t have any cover crop options in his current Countryside Stewardship scheme, but that ends this year, so funding could be available in the future.

Campus oilseed rape was established via autocast this autumn, although not necessarily by design.

“We think oilseed rape needs to be established in the first week of August to get plants big and strong enough to survive cabbage stem flea beetle attacks, but unfortunately we still had wheat and barley in those fields, so we autocast a mix of oilseed rape and berseem clover with an Avadex spreader.

“Just under half of the 80ha has worked really well, the other half not even slightly. It seems to have worked where we had thick crops of wheat and barley, while where crops were thinner it hasn’t – I’m not sure if it was because of moisture or a lack of protection or cover.

He says he wouldn’t rush to do it again. Normally he would direct drill the oilseed rape with the berseem clover, with some liquid fertiliser, into long stubbles.

“The clover grows taller than the rape and with the long stubble helps hide the OSR a little, and get it away from flea beetle. And when the clover dies over winter, it gets a nitrogen boost in the spring, helping it grow away quickly.”

Average yields before last season were about 4.25-4.5t/ha for oilseed rape, while for winter wheat he budgets 8.75t/ha. So far, he hasn’t seen any dip in yields that he can attribute to changing approach, with last season’s weather making comparison difficult.

Alongside the change in establishment regime, he is also looking to reduce inputs, particularly fungicides.

“It has to be done as part of the system though. You have to embrace the whole system of improving soil health, as you can’t reduce your chemical inputs unless you increase the biological quality of your soil.”

After some trials two years ago, he is planning to reduce fungicide applications to two in feed wheat, with milling wheat getting an additional ear spray because of mycotoxins. “That’s quite a big saving from the four sprays we used to do routinely.”

Another way he is reducing inputs, albeit for several years and not as a direct result of the change in philosophy, is through growing spelt rather than a conventional second wheat.

“You spend a lot less growing it and it suits our drive to grow different crops to improve returns. While it yields 1.25t/ha less than a second milling wheat, it only needs one fungicide and half the fertiliser of milling wheat,” he says.

The spelt is dehulled by Craggs in Stockton-on-Tees, which either buys it off the combine or returns the dehulled product to Whatton Farm for it to be sold direct to mills.

Spelt straw is baled for the cattle. “Chopping straw is obviously better for soil health, but no straw leaves the farm without us getting the muck back.”

While in an ideal world, he would like to overwinter the cattle on cover crops grown for that purpose, the soil is too heavy and would be decimated by the animals, he says.

“But we do have grass leys in the rotation, which are good for blackgrass control, and we’ve been trialling different leys, such as a mix of lucerne and red clover, for their benefits for soil health as well as using for silage for the cattle,” he concludes.

Also in our Regenerative Farming series

Part 1 Regenerative farming: The theory and the farmers doing it