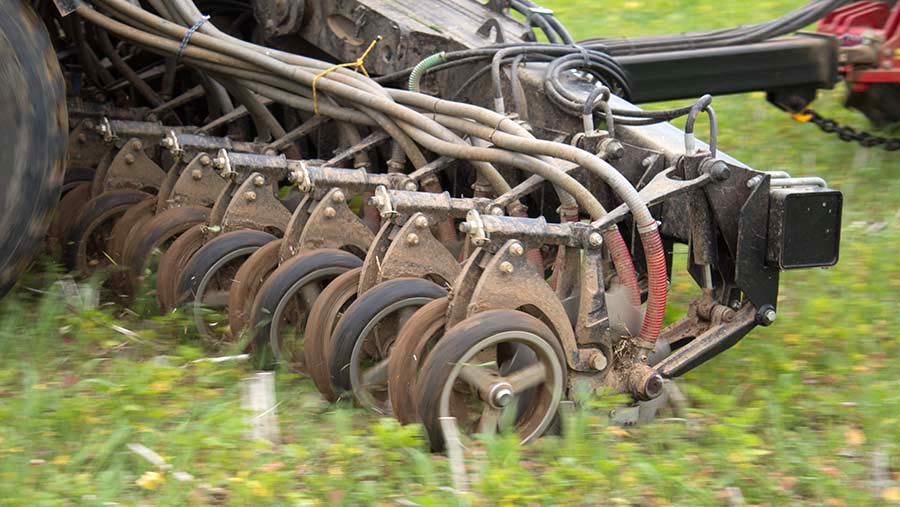 Hefty spending on a new cereal drill and a robotic milking system demonstrates how one big Shropshire estate is looking to leave farming a in better shape for the next generation.

The newly-purchased direct drill will aim to improve soil heath by reducing ploughing and establishing cover crops, while the farm is also working to set its dairy operation on a firm footing for the future.

The 3,200ha Oakly Park Estate has been using minimal tillage for 30 years, but the next stage will be to take the full step to no-tillage with the long-term advantages it will bring.

Farming for the future

Farm manager Tom Carr is guiding the heavy investments agreed by the estate’s owner, the Earl of Plymouth, to set farming up for the future with a clear focus on the environment.

“Soil health is massively important to us going forward and the new drill will allow us to minimise ploughing and introduce cover crops,” the 27-year-old Mr Carr tells Farmers Weekly. 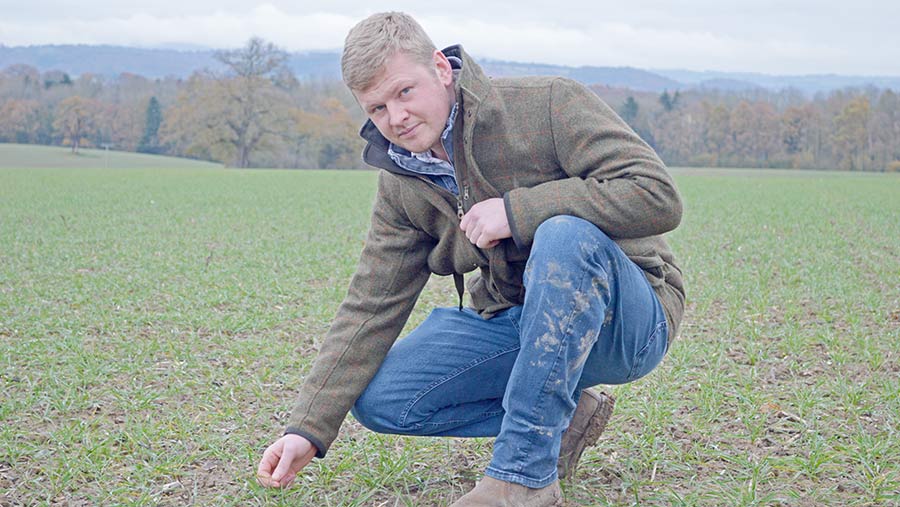 The estate, with a 260-strong dairy herd and 2,500 breeding ewes, already has lots of rotational grass and muck to improve soil health, but a further step was deemed necessary.

So a second-hand 6m wide Cross Slot drill will remove one pass from cultivations and allow placing of fertiliser, as the new machine will have seed and fertiliser hoppers rather than the current grain-only drill.

When it starts work on the farm the drill will slice through the soil profile to create an inverted T-shaped slot, with seed placed accurately on one side and fertiliser on the other.

This will allow the estate to cut diesel costs through fewer cultivation passes while improving the soil – which ranges from heavy clays to gravel and on to sandy loams – by not ploughing.

“Going forward the drill will be the key to the arable programme to give environmental benefits and cut costs,” Mr Carr says. “In a very much machinery-led solution, the drill will be used to get a lot more organic matter and heath into the soil.”

The current earl and his son, Robert Windsor-Clive, are fully committed to developing the farm for the future, and both see mixed farming in Shropshire as essential allied to the needs of the estate’s nearby farm shop and farm café.

The family has farmed the land since Robert Clive, better known as Clive of India, bought the estate in the 1760s after his military successes on the subcontinent.

Of the 2,400ha farmed in-house, just over a half is arable, growing wheat, barley, oilseed rape and maize, with the rest in temporary and permanent grass.

This allows a wide rotation and so the farm grows only first wheats where the focus in this wetter western county is on good quality feed wheats, with milling varieties being phased out.

Varieties such as Graham, Gleam and Gravity make up a big proportion of the wheat area and find a ready home among the plethora of animal feed mills in the livestock-focused Welsh Borders.

Wheat often follows a four-year grass ley for dairy cow grazing and the arrival of the new drill will mean ground can be sprayed off with glyphosate, applied with slurry and then drilled, replacing the need to plough under the old regime.

With livestock heavy in the rotation, wheat nitrogen levels are capped at 220kg/ha, with the focus on targeting nitrogen applications in an already variable rate fertiliser system.

“Our new cultivation system will cut costs and improve soil health, and so should pay us back in not using as much nitrogen,” Mr Carr adds.

This is key for cutting costs, as fungicide bills in this wetter climate are always bigger than at the family’s other farm, in Oxfordshire, showing that disease control is one element that can not be easily trimmed back.

Among the other arable crops, spring beans are favoured as they make a good break crop and improve the soil structure ahead of following wheat crops, and are a useful source of home-grown protein on the mixed farm.

“Beans are a good entry to wheat as the soil is very friable and we can cut back on nitrogen after this nitrogen-fixing crop,” he says.

The pulse crop is fed to fattening cattle and pigs on the estate, and could be introduced to dairy cow rations to limit the use of expensive imported soya.

“We are looking to reduce soya use on cost grounds and to benefit the environment if we can grow beans in the UK rather than import soya from South America,” he says.

The next stage will be to use the new drill to start establishing cover crops to improve soil health further and push up organic matter levels.

“The cover crops will improve organic matter, help with weed suppression and reduce the run-off of water, which is important in this area of the country,” Mr Carr says.

The primary aim of the cover crops will be to create healthier soils rather than simply to fatten lambs and cattle.

Head shepherd Matt Davies, 26, explains that there is enough grass on the estate to fatten 4,000-plus lambs a year, as the sheep can utilise dairy cow and beef cattle pastures in the autumn. 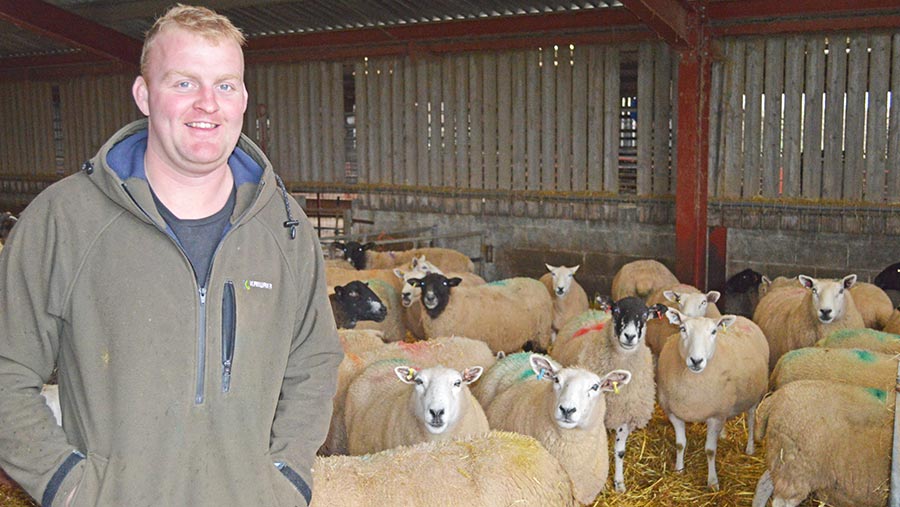 An even bigger investment will be on the milking side, with two old dairies to be replaced by one new facility, managing 240 cows in milk with robotics being used for milking, feeding and slurry scraping.

The cross-bred dairy herd is seen as integral to the whole estate, contributing cheese, ice-cream, cream, butter and yoghurt for the farm shop, the cafe and the renovated estate-owned Clive Arms inn. 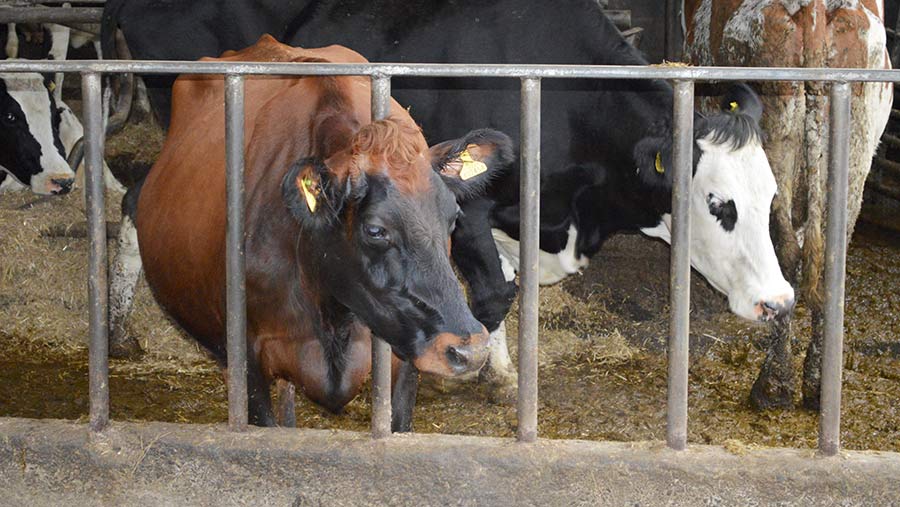 These enterprises are currently using about four cattle, 15 lambs and 18 pigs a week, as well as supplying milk for the manufactured dairy products.

Milk yields are a modest 8,000 litres/cow/year, but Mr Carr is convinced that being a cross-bred herd improves the milk quality while the cows give more lactations and have improved general health including much better feet.

The basic dairy cow winter diet is largely home-grown, made up of maize and grass silage, rapemeal and treated wheat, topped up with concentrates in the milking parlour.

Beans could be next addition to the dairy ration to reduce the reliance on imported soya further, and make the whole estate more resilient for the next generation to farm the land.