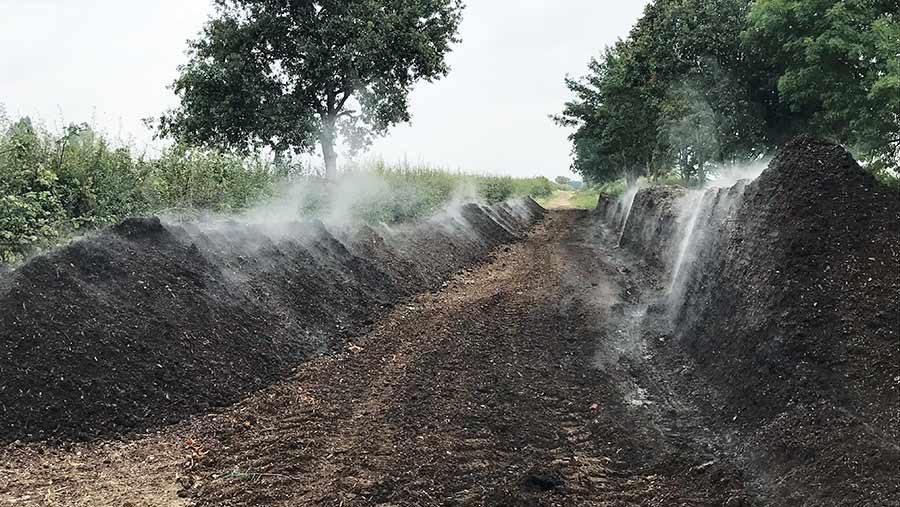 Growers are increasingly looking to improve the resilience of their soils to weather extremes, as unpredictable seasons become more frequent because of climate change.

“If you think of organic matter like burying a sponge, you have the ability to hold water in drought conditions – you have better aggregation in the soil and more space to contain water,” Mr Stotzka says.

“At the same time in very wet conditions you have more ability for drainage.”

Having resilient soil is good against compaction too. “There is less opportunity for compaction, pans and surface capping to build up because there is good organic material. The only way to get that is for the soil biology to cycle it through.”

Farmers should think about adding organic materials in terms of having a varied diet, he says.

“You want a balance of fibrous material and some that’s easier for microbes to eat straight away. A well-rotted farmyard manure has straw which provides fibre – which is going to feed the microbes for longer. The manure element is an instant feed.

“Compost is also great because it is already being broken down by fungi and bacteria so it will inoculate the soil with those microbes.”

Cover crops are another useful way to build organic matter in a rotation, says Mr Stotzka. “More diverse mixes are better, as there are varieties which are easy to digest and others which are more fibrous.”

However, to avoid damaging soil fauna and releasing organic matter unnecessarily, tillage must be used appropriately, he says.

“Sometimes the soil needs to be lifted to get air in, but symbiotic organisms are sensitive to a lot of things we do in agriculture.” Min-till and regenerative agriculture are, therefore, worth considering where they fit into the farming system.

Rick Davies at Newton Lodge Farm, Northamptonshire, has adopted numerous tactics to increase his soil biology over the past eight years.

His primary driver has been drier weather conditions and a need to rectify years of heavy cultivations which had degraded the land. “I wanted to increase soil biology to enhance soil moisture capacity – and it’s working,” he says.

Soil testing his problem fields annually, Mr Davies tries to understand the issues and is starting to see the benefits from the work being put in.

Chopped straw
“We chop all our straw now, to improve compaction by eliminating the heavy machinery and cultivations it would involve to bale it.” He has also been composting to increase organic matter and is noticing the difference. 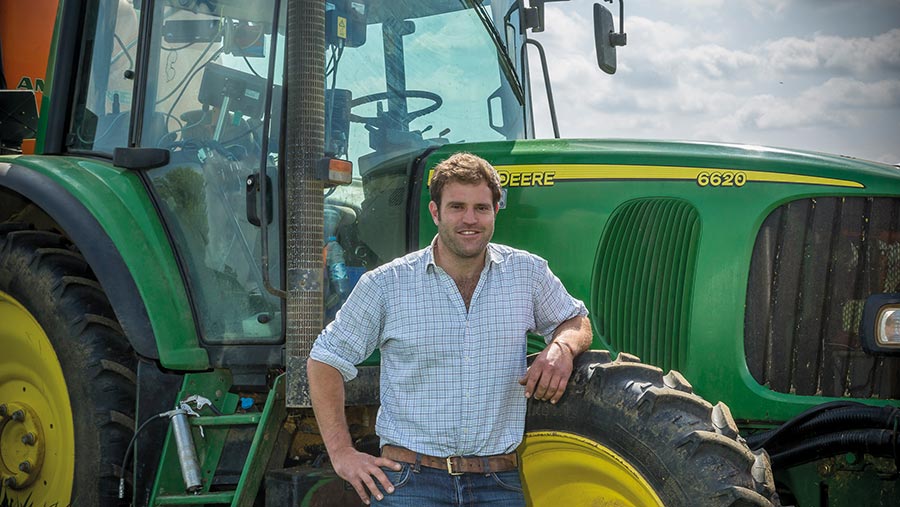 “I have been testing the organic matter for six years now, and it has lifted by two percentage points across some fields. It is between 4% and 9% on the Ignition test across different fields – I’m pleased with the numbers of earthworms too.”

He has also been direct drilling with a Claydon drill for eight years. “Our soils have really improved, they’re easier to work and more friable. I managed to drill everything I needed to, even when it was really wet – I started with a 3m Claydon drill and I have now moved to a 4.8m with the same horsepower – I think that speaks volumes.”

Last year was a testament to the techniques Mr Davies has employed. After an eight-week period without rain his crops were looking dreadful in places and potentially a disaster – but it turned out to be his second-best harvest ever.

“It just goes to show how resilient the crops were and how the system is coming into its own.

“People have now realised we have got to change the way we farm – I feel we are moving towards a position where in the dry periods plants are staying greener for longer.”

Making your own compost

Rick Davies has been composting for the past 18 months in a bid to further improve soil resilience.

“It has really high organic matter content, consisting of woodchip, cow and horse muck,” he says.

Although he originally planned to turn the muck with a forklift he found a second-hand composting machine which chops the material and conveys it into a windrow while aerating it. Then he turns the windrow two to three weeks later. 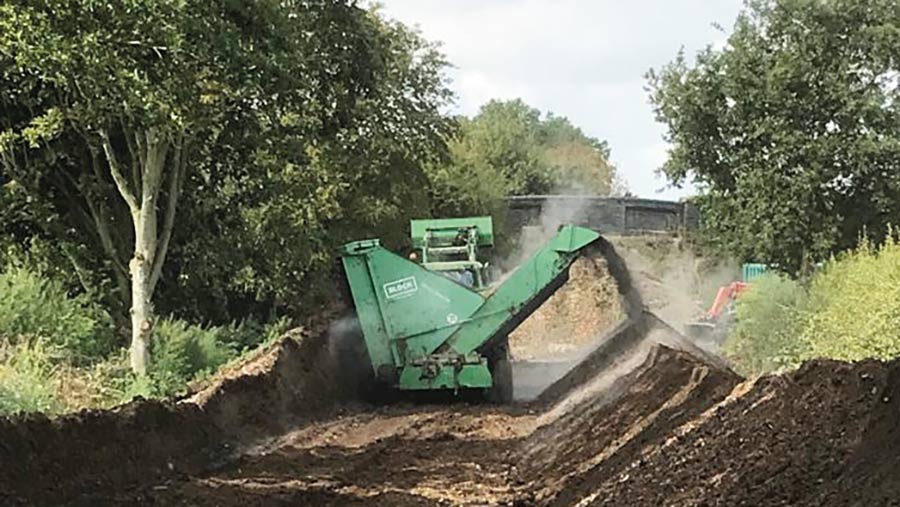 The windrows are turned regularly to ensure aeration

Turning it reduces the temperature and stops it from going anaerobic, explains Mr Davies. “I try to turn it five to six times over a four-month period and spread it in September.”

The system makes the nutrients and organic matter more available. “When you spread farmyard manure (FYM) it could take a year to break down and become useful, whereas the compost is already broken down.” 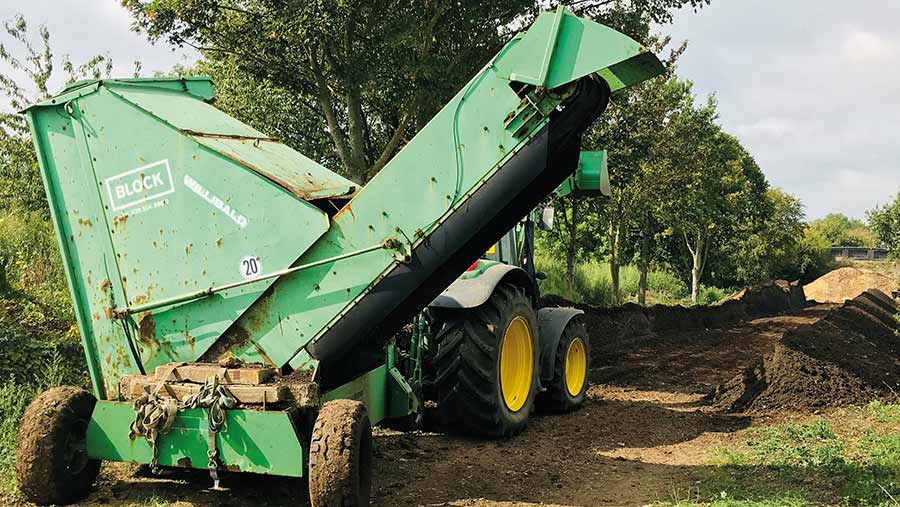 A second-hand composter helps prepare and turn the windrows

It’s also cheaper in terms of contracting – due to its denser, more compact nature – but more expensive to make, says Mr Davies. “I have it NPK tested, and that informs the application rate – 10t/ha is adequate. If it was FYM it would be double that rate.

“However, the benefits outweigh any added cost – because I know it’s right thing for the soil.”

So what are his tips to other farmers looking to compost? “Don’t allow it to get too dry as this can prevent bacteria and worms reaching optimum levels,” he says.

“Turn as many times as is practical and cost effective – something I struggle to do for lack of time.”

In the long term, Mr Davies’s main aim is to become more sustainable and profitable. “I would really like to reduce fertiliser use and import more organic matter.”