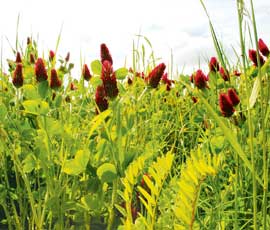 The ideal ley for organic systems would be easy to establish and leave good levels of nitrogen for the next crop to use. Sarah Henly finds out how close we are to achieving this.

They may sound like rock groups, but crimson clover and black medic are legume species anticipated to improve the overall productivity and fertility of arable rotations. That will be music to the ears of organic growers and it should also strike a chord with non-organic producers.

Using these species in ley mixtures is expected to bring three main benefits, says the Organic Research Centre’s Thomas Döring, who has been evaluating a range of leguminous species as part of a three-year LINK project. The first is reliable establishment, the second is more predictable nitrogen fixation, and the third, better weed suppression.

Traditionally, organic growers build fertility using red or white clover in mixes with italian or perennial ryegrass. But the performance of grass/clover leys can be variable, especially under dry conditions.

Furthermore, such clover swards release nitrogen readily upon their incorporation. As the plants in following cereal crops are often too young to take up this residual N immediately, it is often lost to groundwater or to the atmosphere, warns Dr Döring.

The project has created a mixture of 10 leguminous species and four grasses, namely italian and perennial ryegrasses, timothy and meadow fescue. This “all species” mix currently offers advantages over the traditional ley.

“Legumes grow at different rates, which influences establishment and weed suppression. They also have different levels of lignins and polyphenols, compounds which affect the rate of decomposition of nitrogen. We want a species mixture that releases N over months rather than weeks.”

Including the rapidly germinating crimson clover offers great advantages, he explains. It covers the ground quickly and helps to suppress weeds, but it dies down after a few months to leave space for other legumes in the mixture.

Black medic has proved successful as a late niche species, for the second year of the ley. Another promising species is sainfoin, which does particularly well on the higher pH soils of the eastern counties, he adds.

It may be that red and white clovers remain part of the mixture. Dr Döring hopes to be able to pick out from the “all species” mix those that offer a clear benefit.

“We will sample soil and plants this spring to confirm the composition of lignin and polyphenol residues, to gauge the speed of nitrogen decomposition under different scenarios. Computer models will help us predict the growth of the sward and weeds, and potential nitrogen losses.”

The strength of the project, to which the HGCA has contributed £15,000 in kind of the total £1.39m, is its large geographical spread – the mix is being tested on 35 farms from Aberdeen to Truro. By the end of this year, Dr Döring hopes to recommend the best seed mixtures for specific regions.

“We are also determining the optimum mixture for a short-term cover crop and whether to follow a legume-based ley with a spring or winter sown cereal. And work by PhD student Robert Brown at Reading University is evaluating the value of the mixture for pollinators and for decomposers, which are essential for functional agricultural systems.”

Widening the stage further, work at NIAB TAG is quantifying the effect of the incorporation of an “all species” ley on requirements for nitrogen fertiliser applications to the following cereal in conventional systems.

By defining the best legume-based mixtures to sow in different situations, this project will help growers improve productivity and crop quality within arable rotations. It will also reduce the adverse environmental impact of cropping by minimising nitrate losses from the system.