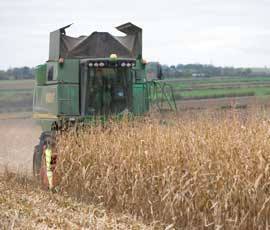 Milk producers wishing to maximise feed efficiency next year should increase the maize content of their ration.

According to new cost analysis of dairy production for 2011-12, upping the proportion of maize to at least 60% in a forage mix and feeding as much grain maize as possible, could bring big benefits.

With current wheat prices at £200/t for 2012 and cereal replacers likely to track upwards, dairy producers should start thinking now about how they can maximise milk revenue and margins, says James Todd of forage specialists Grainseed.

“An obvious course of action is to maximise dry matter intake from home-grown forages. But which forages? And how do producers on mixed farms balance a herd’s feed requirements with the tempting prospect of growing as much cereal as possible to sell off-farm?”

Using a common figure of £200/ha for rent and taking into account all establishment, contractor and variable costs, Grainseed’s new forage costs analysis suggest maize silage can be produced for about £117/t of DM compared to £138/t of DM for grass silage (based on a seven-year ley). Wholecrop wheat without additive comes in at £122/t of DM.

“Analysis has looked at the costs of production for all forages over the last three years, tracking all the changes in costs in that time, and maize consistently comes out top in terms of costs a tonne of dry matter. But when you factor in cost a unit of energy, the difference becomes even greater.”

Modern maize varieties will produce a MJ of energy for about 60-65p, whereas the best grass leys can only achieve 85p/MJ, Mr Todd says.

“One of the biggest differences is grass’s requirement for fertiliser and nutrients which for a typical 300kg N, 80kg P and 280kg K dressing a hectare accounts for more than £700/ha. As fertiliser prices continue to rise, this difference can only grow.”

“There is clear evidence that growers are turning more to maize as feed costs continue to rise,” Mr Todd says.

“This has been compounded by some growers waking up to the idea that, with wheat prices heading ever upwards, if you can grow wholecrop you should really be selling your wheat off-farm and be looking at replacing traditional cereals with more cost-effective options for your rations.”

“Our costs analysis also shows the cost of production for crimped maize grain is now in the region of £1400/ha – again including rent at £200/ha and with crop nutrients contributing around £400/ha. At current prices and with the yield of grain at about 10t/ha, total cost of production is about £140/t.

This is probably higher than most growers calculate as they often don’t account for rent or the fertiliser value of slurry. “If you can buy crimped maize at £150/t ex farm in 2011, you’ll be getting great value.”

In dry matter terms, each MJ of energy supplied by crimped maize will cost about 95p compared with £1.15 for other cereals.