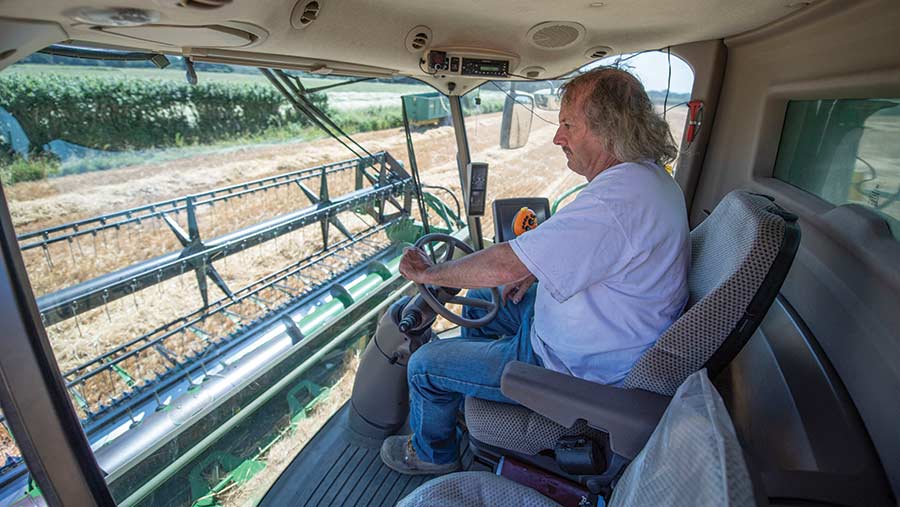 Martin Button cut all his winter barley in June this year, which was the earliest in living memory, even for him, on light sandy soils on the edge of the New Forest.

Cereal crops mature early in this southwestern corner of Hampshire and he has a strategy of early drilling and high seed rates to prepare for the dry spring which he knows will come.

Add in early nitrogen fertiliser in February and direct drilling, then it is clear that all his focus is on getting crops well established before the spring winds funnel up the River Avon valley and dry out his soils.

Many growers have suffered in this summer’s heatwave with crops wilting, but he is used to droughts and focuses on crops suited to light land, such as rye, soya and millet, as well as wheat and barley.

“Everything is aimed at getting crops growing quickly and conserving moisture before dry weather comes to stress the plants from May onwards,” he tells Farmers Weekly.

Too light to grow wheat

He has spent the past 32 years on the 1,600ha Bisterne Farms estate, latterly as arable and environmental manager, covering a range of soil types from land too light to grow wheat down to rich river meadows in environmental schemes.

Cereal crops are all autumn-sown so they can get well established to cope with the spring drought, while break crops of maize, fodder beet, linseed and soya are spring-sown, with the emphasis always on quality rather than quantity.

“We are never going to get barn-busting yields on these light soils so we look to win premiums for the crops we grow,” he says.

That means Skyfall milling wheat, winter rye grown for Ryvita and winter barley for seed, and all are drilled early to get good establishment and good rooting before the winter months.

Winter barley drilling starts in the second week of September on the estate where he is in charge of managing 320ha of arable land just south of Ringwood, and some six miles from the coast at Christchurch where the River Avon enters the sea.

All winter cereals are drilled by the end of the September, and he readily admits that the early drilling regime requires the absence of blackgrass on his light well-drained land, but he still needs to hand rogue any wild oats which creep into his fields.

Drilling seed rates are pushed up to encourage more tillering and improve their survival rate, with winter wheat drilled at 188kg/ha and winter barley at 150kg/ha.

The next move in the strategy to lessen the effects of drought came three years ago with a switch to direct drilling, and a 4m-wide John Deere 750a drill was bought as part of the farm’s conservation tillage approach to retain moisture in the soil.

“Crops look better in the winter as they establish quicker and show better rooting, and we have not seen any yield dip from the changeover,” he says.

Only plough when absolutely necessary

Ploughing is now used only when absolutely necessary to correct severe problems, as he has seen the no-tillage approach adding organic matter to the top 10cm of the farm’s soil.

The one downside of no-tillage is that slugs have become a problem, and a stubble rake has to be employed before drilling and slug pellets after drilling.

“But the soils have improved as they are more friable, with more organic matter and more earthworms,” he says.

Nitrogen rates are a conservative 200kg/ha on winter wheat and 170-180kg/ha on barley, and he is keen to get on as early as possible in February with a 30-40kg/ha dose to get crops growing.

He started cutting his 44ha of Tower winter barley on 27 June this summer, about two weeks earlier than normal for the farm, with a respectable yield of 6-7t/ha for such a dry year. The farm’s medium-term average is just over 8t/ha.

”The start to harvest was the earliest in my time on the estate, whereas we would normally start around my birthday on the 12 July,” he says.

The barley was harvested very dry at 12% moisture, but despite the dry weather and the barley grain appearing a bit pinched it produced a good specific weight of 70kg/hl.

Some 60ha of Skyfall wheat yielded 6.9t/ha when the farm’s average is a touch under 8.5t/ha, and the 60ha of winter rye was a bit lower than the farm’s five-year average of 7.5t/ha.

Looking back, it was tough growing year with waterlogging in the early spring and then nine weeks without rain which saw small patches of crops became very dry and dying off, he says.

With little moisture around at the grain filling stage, he saw a lot of blank grain sites in the wheat at harvest and generally small heads in the barley. 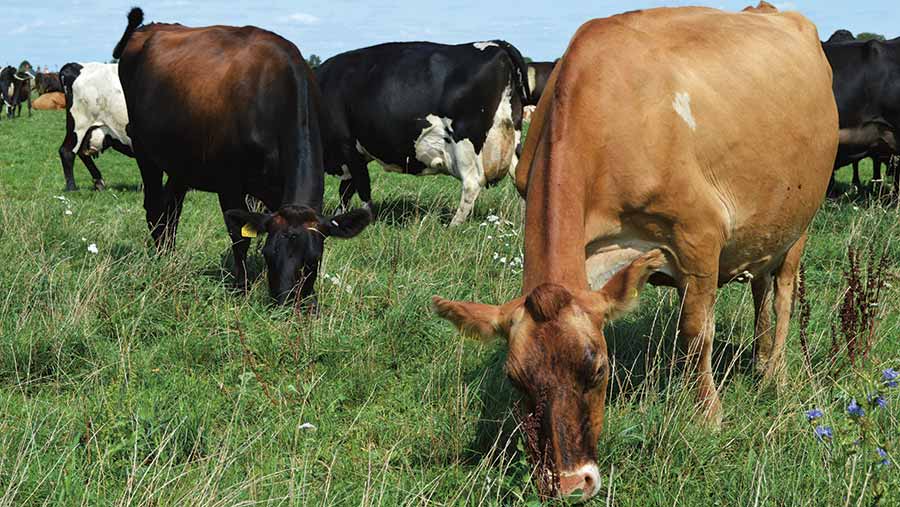 For the future, the estate is looking to rotate grassland which is used for a 520-strong dairy herd across the arable area to improve soil fertility, and this will start soon with new leys planned and old leys ploughed up for growing winter wheat.

All the cows are cross-bred and include Friesian, Jersey and Norwegian Red blood. They can be kept outside for most of the year which fits in with the estate’s philosophy of improving its light soils with grazing livestock.

“We are looking after the soil for the future, and we are also using plenty of compost and farmyard manure where we can,” he adds.

Half the straw from the estate is usually chopped each year, but this harvest virtually all was baled and sold due to the high prices and demand from livestock farmers further west.