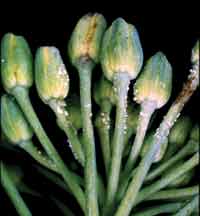 Both diseases uncontrolled can slash output by 1t/ha, and many rape crops could merit protection within the next fortnight, advised Peter Gladders of ADAS.

“By March last spring, half of all crops were above the 25% infection treatment threshold.”

Surveys based on inoculum from last year’s crops and summer weather suggested this season’s light leaf spot risk had risen in all areas except the south-west – and particularly so in the midlands.

Crop Monitor surveys had found symptoms unusually early – in December, and there had been some reports in November. “The disease is out there, it likes cold weather and everything is gearing up for this being the worst year since 1995,” said Dr Gladders.

Autumn fungicide treatments for phoma had little impact on light leaf spot. But the good news was that a single early spring spray could control the disease, and he urged growers and agronomists to check crops for symptoms as soon as possible.

“Take it out this month if you can find it. Spraying in mid-March is too late – you could lose 0.5t/ha.”

“But I wouldn’t have too many reservations about sticking with older products in England where you have low levels of the disease.” These included Punch C (flusilazole + carbendazim) Charisma (flusilazole + famoxadone) and Folicur (tebuconazole).

Ramularia, which causes leaf spotting in spring barley, was detected in Norfolk last season, and there were clear signs that the disease could be seed-borne, said the SAC‘s Simon Oxley.

“The average yield loss is 0.4t/ha but you can lose up to 1t/ha. We’re still trying to get a better feel for its life cycle, but we now know it can be in seed.”

That finding arose from last season’s monitoring by spore traps, both in Scotland and at The Arable Group (TAG), Morley which found a big late summer burst of spores linked to leaf wetness.

Last season showed there were significant differences between varieties’ resistance to ramularia, so malting growers considering switching from NFC-Tipple to the newer Quench should be aware that the latter was more susceptible.

As far as controlling the disease, strobilurin fungicides were “dead and buried”, but there were plenty of other options, preferably applied at GS49. However, that was later than the ideal GS25-30 for guarding against rhynchosporium

“Bravo gives good control but not as good a yield as Proline.”

Read more from the HGCA workshop