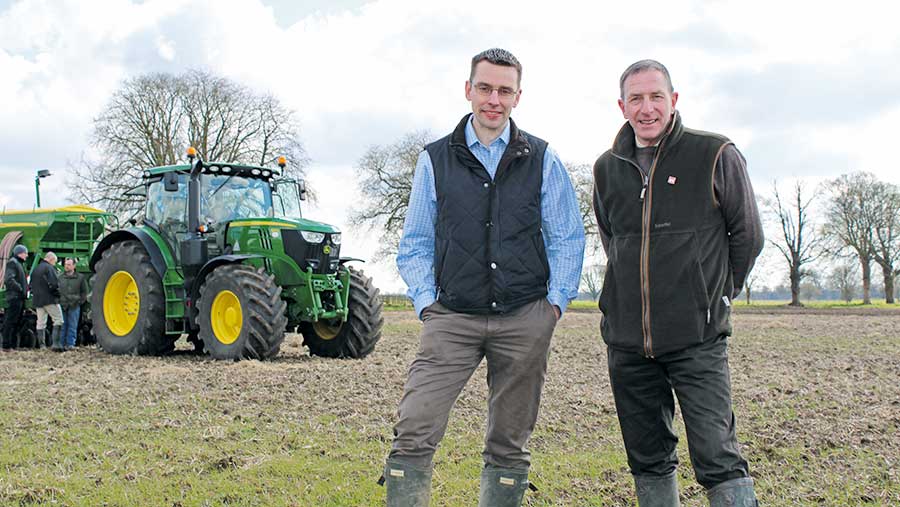 A radical change in crop rotations, improving soil health and trying out cover crops are all part of a comprehensive plan to pump up yields and maintain profits on one Lincolnshire estate.

Sitting on the southern doorstep of the Lincolnshire Wolds, the Revesby Estate is about 20 miles west of Skegness, near the market town of Horncastle.

After farm tenanted land was brought back under the control of the estate, the decision was made to launch a soil-improvement project with advisory group Agrii to investigate the best ways to promote healthy soils.

Major concerns over blackgrass control and yield sustainability had already sparked changes on the Wiggins-Davies family estate, with farm manager Peter Cartwright and his team tasked with ensuring the profitability of the 1,220ha arable enterprise.

The farm itself is now an in-house tenant to the Revesby Estate, growing winter and spring wheat, winter barley, spring beans, spring oats, sugar beet and oilseed rape, which is mostly a high-oleic, low-linolenic (Holl) variety, plus 130ha of grassland.

“We have had good yields for the past two years and now we want to sustain this,” he explains.

“We have a lot of soil health issues, the land drainage isn’t working and so blackgrass is coming on the back of that.”

However, Mr Cartwright says that a farm average of more than 10t/ha needs to be hit over a longer period to be regarded as a sustainable average.

Working with Agrii agronomist Richard Butler, Mr Cartwright calculates that blackgrass is costing the farm about 2t/ha in wheat output, with extra seed and chemical costs amounting to £50-£100/ha.

A costly overhaul of field drainage systems has put added pressure on the farm to turn a healthy profit, with Mr Cartwright estimating this investment will take 8-10 years to pay for itself through better yields.

Once Mr Cartwright took charge, the farm started to move away from an old and unsustainable wheat, wheat, oilseed rape rotation.

“It soon became apparent to me that a second wheat cannot be grown because of blackgrass pressure,” he says. “Everything we do now is to try to get a good crop of first wheat and make a decent margin.”

The plough is used to bury blackgrass seed, with any flushes sprayed off with gylphosate, and then spring wheat is drilled. Mr Cartwright says this gives a better margin than second wheats.

Mr Cartwright believes that there is an optimum health level for any field and reaching this is the only way to get the top yield for that plot of land.

To hit this, all the fundamentals, such as drainage and soil structure, need to be in good working order.

“We are looking to push yield boundaries with improved soil health. We need to have all the pieces of the jigsaw working to reach the full potential of the farm,” he adds.

Now Mr Cartwright is looking to incorporate cover crops into the rotation with the help of Agrii.

“We are asking how cover crops can fit in with blackgrass control on heavy land. We see oil radish tap roots help to break up compacted layers, while black oat and vetch root density gives a friable topsoil,” he says.

Mr Corbett adds that phacelia hasn’t proved to be a species for deep soil improvement, while white mustard drilled in October can be a good water pump – but there is little benefit to soil structure.

Mr Cartwright says he will “hit the reset button” by ploughing in the autumn and then drilling a cover crop in a plan to deal with blackgrass.

Spring wheat will follow this, then another cover crop, a second spring wheat, a cover crop and then spring beans.

“You’ve got to understand what you want from the cover crop. Is it soil structure or organic matter increase or nutrient capture?” he says.

One early observation is that the farm-saved spring oats are very good at scavenging for phosphate, which is released to the following crop with a big increase in trace elements such as manganese. The farm is also experimenting with the use of vetch in cover crops.

“My thought is that vetch is fixing nitrogen and keeping a very nice and open soil structure. I hope that it allows the spring wheat to get going with a lot of nutrients available to it and this could help it out-compete blackgrass,” explains Mr Cartwright.

“This is what we want from cover crops. Growing them can be challenging and sometimes I do think to myself that things were simpler in the old days – there are lots of unknowns now,” he says.

Now the farm is gearing up for a change to a long-term sustainable crop rotation, which will probably be winter wheat, oilseed rape, winter wheat followed by a cover crop and then a spring break crop of either beans, oats or sugar beet.

Farmers Weekly will return to the Revesby Estate later this year to find out what has been learned from the farm’s soil-improvement project.