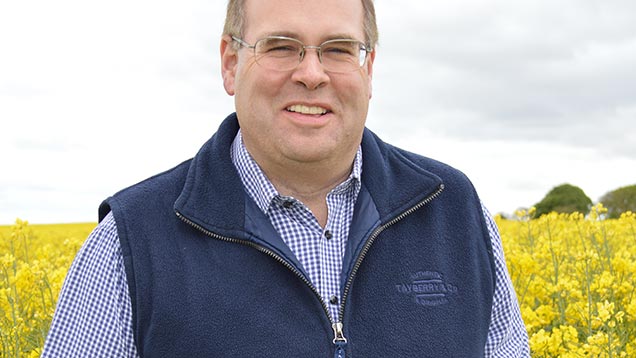 Lincolnshire grower Tim Lamyman is aiming to win back his world record crown for the highest yield of oilseed rape.

Mr Lamyman gained his world record last summer with a yield of 6.14t/ha, only to be beaten earlier this year by New Zealand grower Chris Dennison with 6.31t/ha.

Farming high on the Lincolnshire Wolds, Mr Lamyman says his crop – aimed at breaking the world record – looks the best he has ever seen at late flowering.

“It’s the best, most even, crop I have ever seen, and I would expect all the field to perform well,” he tells Farmers Weekly on his farm at Worlaby, just south of Louth.

For this season, he has switched to the variety Picto from last season’s Charger as it has better resistance to light leaf spot disease, which has become more of a problem on his farm over the last five years.

His crop has received seven foliar feed treatments of macro and micronutrients throughout the season, with three in the autumn and four in the spring.

This is aimed at feeding the crop with whatever nutrients are needed and avoid plant stress, and has given better establishment and deeper rooting in the autumn.

The last two foliar feeds were combined with fungicide sprays at flowering and also contained a calcium product, Calflux.

He explains that calcium is rarely deficient in plants, but is very often short in the flowers and pods and he sees the treatment as producing bigger pods.

“We have seen good pod survival and see little stress in the plants so all looks well for a good harvest,” he says.

Mr Lamyman is helped and advised by agronomist Simon Shaw from distributor Farmacy on crop inputs.