Livestock numbers are being scaled up with cover crops and grass leys being deployed in the battle against blackgrass and other grassweeds at Benningholme Grange, a farm on heavy land 10 miles from the East Yorkshire coast near Beverley.

Weeds are being smothered out by ryegrass mixtures and catch cropping that will be grazed by sheep and store cattle on the 380ha tenanted holding of brothers David and Guy Shelby, who farm in partnership with their parents.

Livestock are bringing further benefits by cutting the amount of bagged fertiliser being used, providing a monthly income to help with cashflow, and improving soil quality.

Adding grazing crops to the arable rotation is part of a wider strategy to promote good soil health and improve sustainability by slashing the brothers’ reliance on the chemical can.

This is part two in a four-part series looking at livestock in the arable rotation. Catch up with part one in the series which showed how sheep were making the most of vegetable waste on light land in Suffolk.

Look out for part three in May which will feature Hampshire farmer Tim May telling us why he decided to put half of his 2,500 acre arable unit back to grass, and what he’s going to do with it next.

Blackgrass is one of the biggest problems affecting the farm as the high organic matter soils are not only great at growing crops, but also “every weed under the sun,” says Guy, and as residual weed control has proved less effective than in other parts of the UK, non-chemical methods were called for.

The brothers are already using cultural controls against the weed, by using the plough to bury blackgrass seed ahead of peas followed by minimum soil disturbance in subsequent seasons, using strip tillage to establish wheat, oilseed rape and beans.

While the targeted use of the plough has helped drive big yields on the cleanest land, the brothers realised further steps were needed to target problem fields, where the high yield potential from the fertile land wasn’t being met. 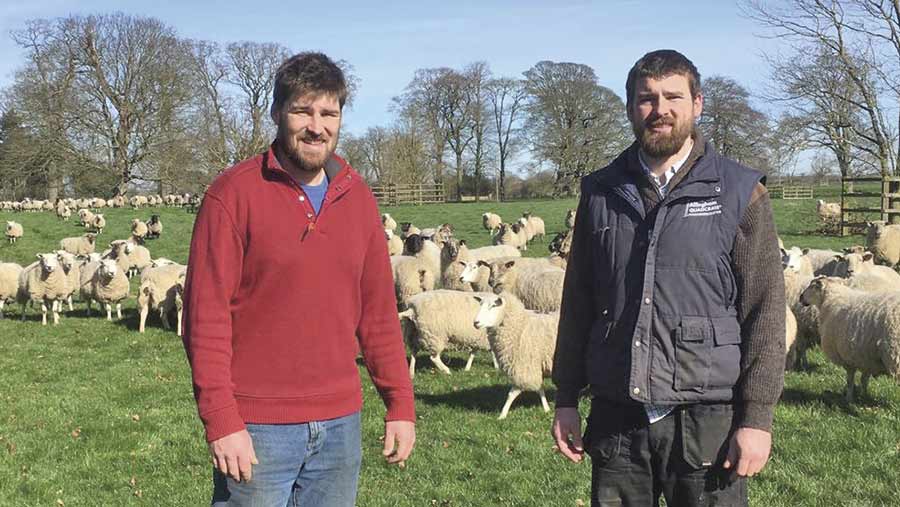 The next step was to kill crops that are losing the weed battle, with a blackgrass-infested oilseed rape field pulled up last season and replaced with a mustard crop that was grazed off.

This offered another chance to spray with glyphosate before using a more competitive crop to smother out regrowth, explains Guy, who adds that while it is painful to lose a crop, it’s less of a financial penalty than continuing to spend on a crop which won’t yield.

Especially given that the farm’s highly susceptible damp, coastal land means they have to spend more on fungicides, which can cost between £80-£130/ha.

However, the realisation that one season wasn’t long enough to control blackgrass where a high seed burden was present led to the strategy being taken one further step by putting the worst land into longer-term forage cropping.

Around 16ha is earmarked to be down to three-year ryegrass and clover leys by September this year, with half that sown last season. This area will then be rotated around the farm on the most weed-infested areas.

Alongside 24ha of set-aside stewardship land, this will provide more grazing for an increasing number of livestock, and ground for silage-making, which will support cattle being housed during the winter months.

In contrast to many arable units, there has always been livestock present at Benningholme Grange but until recently this has been limited to a small sheep flock and the bed and breakfast pig enterprises common to the area.

Pigs arrive at 35kg and are turned into 110-120kg heavyweights on a 15-week cycle, with the farm providing the labour and a 2,000 berth unit, while a partner supplies the animals.

The mixture of slatted and strawed yards provides a useful mix of both slurry and farmyard manure (FYM), with slurry boosting nitrogen and potash levels, while the FYM is praised by Guy for increasing both the fertility and workability of the land.

More forage cropping will also allow stockman David to increase flock numbers, and capture more of the value of sale lambs by fattening them on the higher quality leys rather than selling in the store market.

He’s set himself the target of increasing ewe numbers from the current 270 breeding ewes to 400-450 ewes in two years using only home-bred replacements. 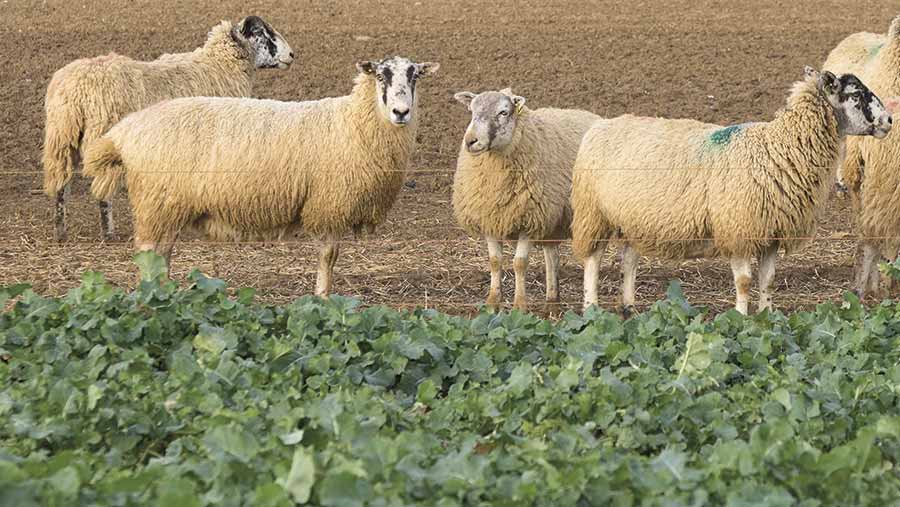 A breeding shake-up is also under way with the North Country Mule being phased out in favour of a Lleyn x Romney, which should be a better fit for the outdoor lambing system, David explains.

He plans to subdivide the grazing ground using electric fencing, which will be cheaper than erecting permanent barriers, and also allows greater flexibility setting for setting up different paddock sizes for different size management groups, to best utilise the valuable grass.

David hopes the combination of high output ryegrass and clover leys, growing on clean, worm-free pasture, should be enough to push lambs to finishing at a target weight of 42kg.

Later maturing lambs will be helped on their way by the catch cropping, with a ryegrass, forage rape, and turnip mixture planned to provide both feed value and weed competition.

Ensuring that the weeds can never go to seed over the duration of the grass ley will also be helped by taking early, high quality, silage cuts to feed store cattle through the winter.

The first batch of 50 Luing weanling stores have recently being purchased, and will be turned out onto the stewardship grassland once ground conditions permit during the spring.

Once sufficient silage has been cut the cattle will then graze the more nutritious rotational leys alongside the sheep. The cattle will be sold in the back end of the autumn as forward stores, before a new batch is purchased.

A return to balanced farming?

Having always had livestock, Guy and David acknowledge that they are at an advantage over arable farmers who may be interested in the principle of putting grass back into the system, but are concerned about their lack of livestock husbandry skills.

On many arable farms the person who removed livestock and grass is now at retirement age, and the following generation has never had any livestock experience, something they acknowledge makes it very hard to go back.

Older farmers who don’t feel they can cope with the more physical tasks of sheep and cattle should look to partner up with someone younger, while Guy says that anyone else thinking about it should simply have a go because they have nothing to lose.

“Grass adds so much; fields that have had grass are now the fittest fields on the farm,” says Guy.

He points the finger of blame partly at oilseed rape, explaining that this was the crop that encouraged many growers to ditch grass and shorten their rotations. 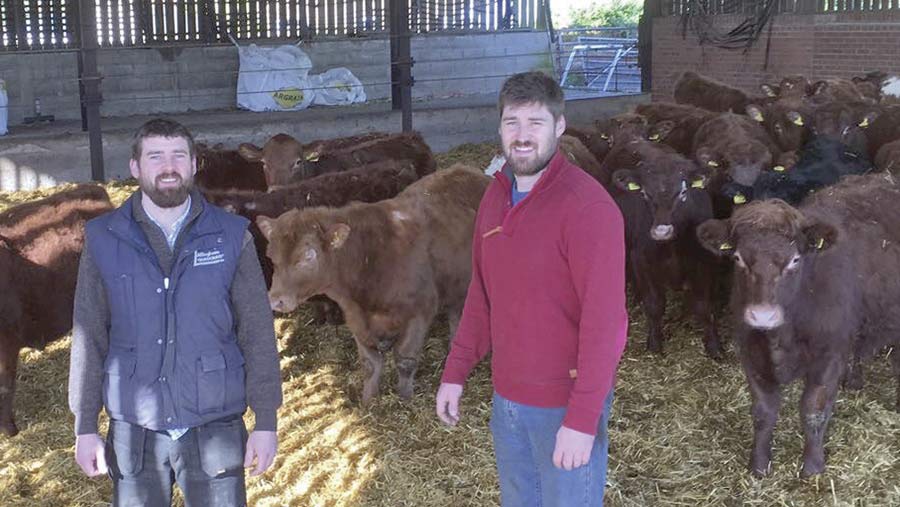 Many farms never had slug problems until the crop came along, he added, saying incorporating grass into the rotation is a key part of a return to “balanced farming”.

“Some arable farmers will be quite happy doing what they’re doing now,” he says, “but don’t moan to the chemical companies when the next grassweed chemical control doesn’t come along.”

He believes tenanted arable farmers should be particularly encouraged to have a go with livestock, because a more diverse income helps pay the rent; the pig enterprise, he says, brought in vital income for the farm when wheat prices fell to £80/t.

Guy Shelby is the current Farmers Weekly Arable farmer of the Year. Nominate a farmer, or enter yourself for this year’s awards on the Awards website.