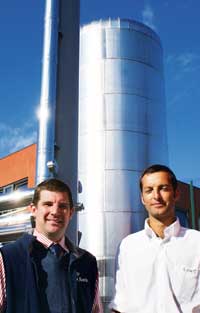 Local community projects could prove a money-spinner for rapeseed growers who can assess the carbon cost of their production, a European Bioenergy Expo and Conference study tour found out.

The heart of a groundbreaking renewable energy project in Nottingham is a bit of a surprise, not because of its novelty, but rather its apparent lack of it.

It’s a Deutz engine, exactly like one you’d find on a combine harvester, connected to a small black box that houses a generator. Yet this engine can power 100 homes and heat an entire school, all fuelled by pure rapeseed oil from local farms.

The project is a pilot venture, part of the government’s Building Schools for the Future scheme. Big Wood School in Nottingham is the first to be built, due to open shortly, and includes the combined heat and power (CHP) unit as part of a Nottingham City Council minimum requirement of 20% onsite renewable energy.

“We’re actually achieving up to 75% with this unit,” says Markus Kustermann, technical director of LowC Communities. The company won the contract to devise, source, build and look after the CHP installation, as well as another for a second school in the same area.

“Because we’re drawing the heat off it as well as generating the electricity, the unit runs at about 80% efficiency. Most power stations only manage 30% by the time you account for losses through the grid.”

The £400,000 installation delivers 180kWh of thermal energy and 150kW of electrical power. Surplus electricity is sold to the National Grid, which means around £25,000 to £40,000 per year net cost savings for the school, compared with a conventional supply of energy.

All this from a Deutz combine engine? “The generator itself is pretty straightforward. But there’s a lot of very sophisticated equipment around it to ensure we get the energy conversion we want and to synchronise the output with the National Grid,” says Mr Kustermann.

This is how the CHP unit has managed to achieve its impressive energy-efficiency figures. But the crucial figure was the carbon reduction the project could achieve – at 60% this is more than twice what a biomass boiler could muster and five times the carbon saving of a wind turbine. “Nottingham Council has committed to be carbon neutral by 2016. We had to be sure we could reliably measure the carbon footprint of every step in the process.”

That included the fuel. “We chose Phoenix Fuels chiefly because they can supply the full carbon traceability and the local supply.”

Phoenix can do this because it is supplied by a group of farmers who already work closely together to supply fresh produce to multiple retailers through Sherwood Produce (see below). With nearly every farm in the group now LEAF-Marque accredited, there’s a record of every drop of water and joule of energy used.

“We know every step of the process, so can assess the carbon footprint,” notes Phoenix production director Colin Bower. “It puts us in a very strong position when it comes to supplying this sort of contract – it’s the most traceable fuel on the market.”

The contracts amount to about 250,000 litres of oil for each school, giving a total throughput requirement of 1300t of rapeseed. The fuel is proving to be a more lucrative option than biodiesel, partly because government incentives for renewable CHP units are far more generous than for road fuel. This is set to increase further when feed-in tariffs are introduced in April 2010, giving small-scale energy producers an income of up to 36.5p/kWh, based on the capacity of their installation.

The future looks bright for this kind of CHP installation, says Mr Kustermann. “There’s a renewable energy requirement for nearly every public building that is being put up, and a lot of private ones too.” LowC itself is involved with a number of different community projects, while the BSF scheme is a 15-year government commitment to renew or rebuild every secondary school in the country.

“The key requirement is to be able to measure the carbon footprint. A renewable CHP installation makes a very attractive offering if it is run on a supply of local material from farmers who can measure their carbon rating.”

There’s a strong environmental track record across the Sherwood Produce group of farms and one that it is keen to trade on. Collectively the group farms almost 7000ha. This includes 2900ha of fresh produce grown for a number of retailers and packed at its own premises in Nottingham.

Phoenix Fuels was started around five years ago as a result of the group’s quest for carbon neutrality. The aim was to make the fuel to transport produce to and from the packhouse.

“Initially biodiesel was the route,” says Phoenix production director Colin Bower. “We wanted Phoenix to wash its face as a business, but it was very much a marketing tool to sell vegetables.”

A crushing plant was installed on Mr Bower’s 210ha (520-acre) arable unit he farms with his father at Rufford, just outside Nottingham. There they can process up to 8000t of rapeseed that currently comes exclusively from farms within the Sherwood group. “With the extractable oil from a cold press making up only around 30% of output, we pretty soon realised we had to do something with the rapemeal, too.”

This is now pressed into Green Dragon briquettes for wood-burning stoves. These sell for around £10 for 15kg through local farm shops and garden centres. They also make pellets for biomass boilers. “There’s about 10% oil in the rapemeal, which makes it one of the best biomass fuels on the market.”

With the value of the biodiesel side dropping off, the plant is concentrating on Pure Plant Oil (PPO) for the fleet of trucks that are converted to run on it and for energy generation. This includes feedstock for a 500kW generator for the packhouse. It may not bring many financial savings for the group, but it does mean carbon savings of around 30-50%, making Sherwood a very attractive supplier to carbon-conscious retailers.

“We’re now looking to expand and are adding a bottling plant for culinary oils.” As part of this Mr Bower is trialling 40-50 varieties to see how type and management practice affect oil quality. “There are so many different parameters, but we have the field records to cross-reference. We believe these are the only trials of their type in the country.”

Meanwhile there are also plans to lease the oil to deep-fat fryers, converting it into biodiesel when it returns. “We will be looking for other rapeseed growers outside the group, but they will have to meet stringent traceability protocols,” says Mr Bower.

The carbon dioxide (or equivalent) cost of each litre of oil is 1.76kg. 1.03kg can be attributed to the rapemeal, leaving a net production of 0.73 kg CO2.