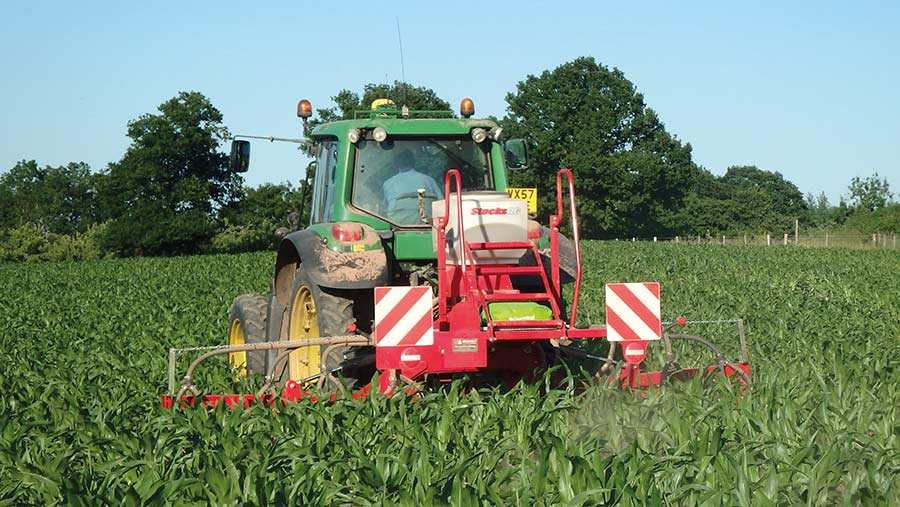 For the past six years, David Pursey has undersown maize with Italian ryegrass to protect against soil erosion and provide a post-lambing spring bite for ewes and lambs.

“We decided to undersow to make better use of nutrients by trying to reduce leaching and soil erosion over winter.

It allows us to graze more stock and I definitely think the livestock helps the soil biology, too,” he explains.

He also believes the Environment Agency will likely increase pressure on maize growers not to leave stubbles bare over winter because of erosion risk, adding: “Washing your topsoil away can’t be a good move.” 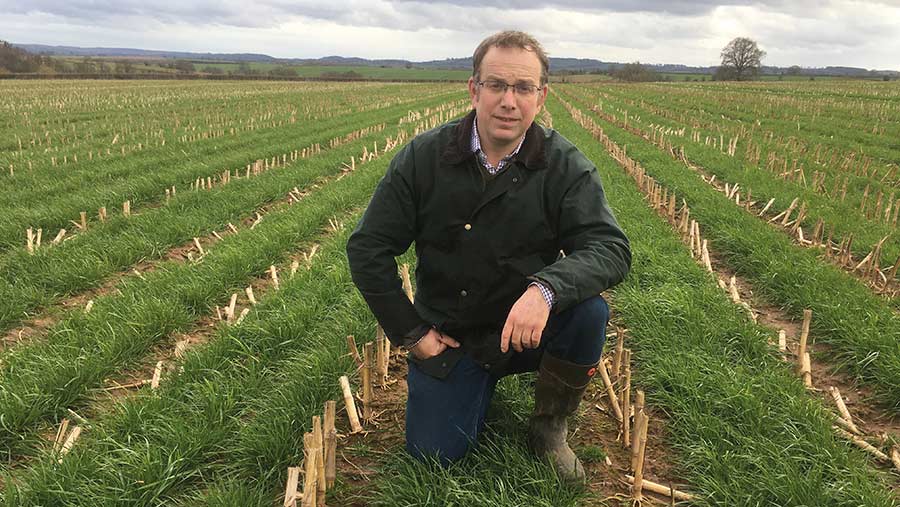 Mr Pursey grows maize predominantly as an energy crop for a 499kW anaerobic digester. About 5% is fed to cattle and sheep.

The flock is fed maize silage as part of a total mixed ration (TMR) in the run-up to lambing and then afterwards in troughs. Heifers also receive it as part of a TMR.

An additional 5% is dried for use as bedding in broiler housing.

A total of 162ha (400 acres) of maize is grown, usually in rotation with wheat. Fields that are to be put into maize for two consecutive years before moving to wheat are selected for undersowing with grass. These make up 40-53ha (100-130 acres) annually.

Maize is drilled in April to May, depending on specific fields. Maize varieties are selected based on drilling date and field, regardless of undersowing,

The main, early-drilled crop tends to include varieties with a Food and Agriculture Organisation (FAO) maturity rating of 180-200 heat units.

Varieties with a lower rating (early-maturing) of about 160 heat units will be selected for crops to be drilled later.

As the grass is a short-term ley, which will only be used for grazing the following spring, before the field is reseeded with maize, Mr Pursey uses Italian ryegrass for undersowing.

“We’ve had good results. You get decent yields and it has vigour, so it establishes well,” he says.

How is the grass used?

Grass is mainly used for grazing with ewes and lambs after lambing in February.

After the maize is harvested, the grass may also be grazed with ewes before Christmas if there is sufficient growth.

Fertiliser or digestate may be applied in the spring, depending on how much forage is required.

Mr Pursey says deciding how long the grass should be grazed for and when it should be burned off for the following maize crop to be established is a balancing act.

Leaving maize drilling too late after the first year of grass can compromise maize yields (see “Top tips for undersowing maize with grass”).

“You would have to leave the grass pretty late into May to cover the costs of the drilling and the seed and to get an effective grazing return,” he adds.

He aims to burn off the Italian ryegrass before 10 May and then repeat the process of undersowing maize with grass in the second year.

He has tried growing crops such as forage rye and spring oats after maize harvest, but he found nothing works as well or is as cost-effective or reliable as undersowing with grass.

He is committed to continuing to undersow maize with grass.

“It is improving soil health. [The soil] is more friable and better structured – whether that’s because of the grass or the livestock, I don’t know,” he says.

“It has also given us some grazing at a time when we need it. It allows us to use resource, whether that’s phosphorus, potassium and nitrogen in the soil, or grazing. It’s allowing us to be more efficient.”