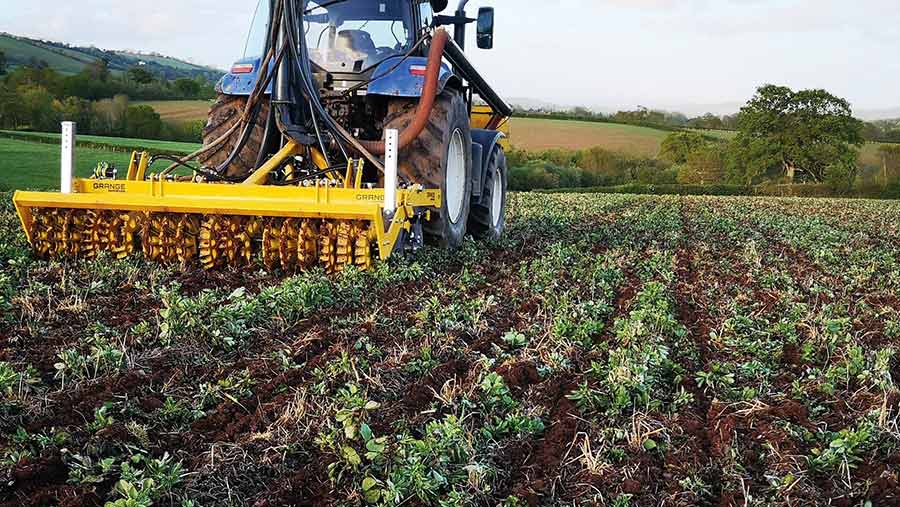 Devon grower James Lee is a keen advocate of minimum tillage on his soils in the wetter West, but when it comes to sowing maize it carries unique challenges.

Ideally, the crop needs a deep, friable seed-bed, which is why most farmers will plough or cultivate ahead of it. But that involves having bare soil over the winter and spring, leaving it open to erosion and nutrient run-off after heavy rain.

Determined to find a solution, Mr Lee has trialled various options – and has now found one which really works.

“I wanted to establish the maize with less cultivation,” he says. “Why cultivate the whole soil when you don’t need to?”

Six years ago he tried a strip-till cultivator from the US, which did only about half the job he wanted. “It relied on the tine doing all the work,” he says. “There was no secondary option to cultivate the strip, so you had to do two passes.”

Although Mr Lee tried to get a variety of manufacturers to make what he wanted, it wasn’t until he met Grange Machinery at the Groundswell event in 2019 that he found a suitable partner. And this year he got to use the second prototype version. 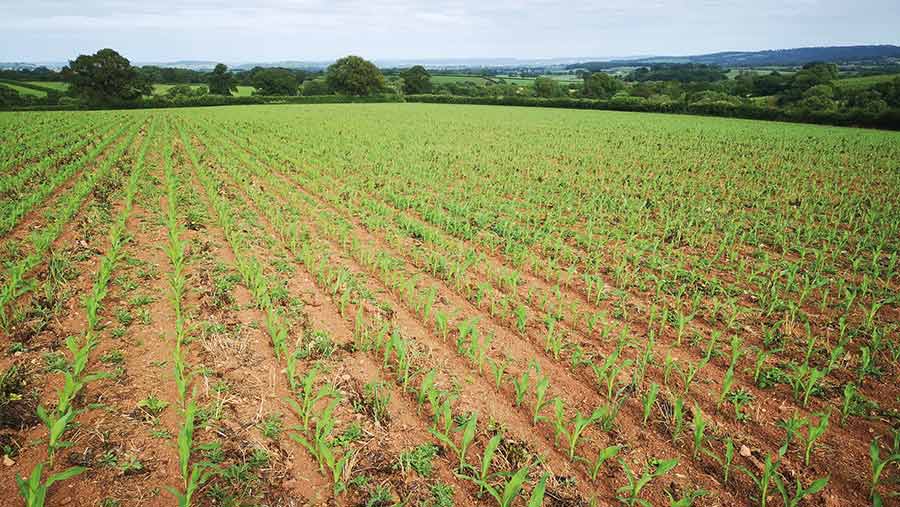 “It has a cutting disc before the tine, which goes through the trash and leaves any mulch between the rows. It’s adjustable, so you get a better seed-bed in one pass,” he says.

The strip till has a 50cm row width – although when it is released commercially it will also have a 75cm option and auto-reset legs. With the tine reaching to up to 30cm deep at 50cm width, that lifts the whole profile of the soil, ensuring an optimum seed-bed for the roots to get down. “The maize rows close over better, and we should be able to push yields more.”

However, the strip till is only part of the story. The other element is introducing cover crops to fix and scavenge nitrogen over the winter, boost soil organic matter, and reduce the risk of damaging erosion and run-off.

Ross Cherrington, the trust’s senior farm adviser, explains: “James came up with a cover crop mix to reduce the risk of leaching nitrogen into the water. We funded the seed and establishment – and if it works we’d like to see it rolled out further across the catchment.”

The mix comprises winter beans to fix nitrogen and oats to scavenge it. “If you just have red clover, this fixes nitrogen, but then releases it, and potentially leaches it, when it dies back over the winter,” explains Mr Cherrington. “In contrast, the beans release it slowly and the oats take it back up.”

Analysis in the spring showed that the soil contained 30kg/ha more nitrogen as a result of the cover crop. At about £385/t (at the time of writing) for ammonium nitrate, that’s a considerable saving, he adds. “It’s got to be financially viable.”

Last winter, Mr Lee planted a variety of cover crops; he had 3.6ha of berseem clover in a forage rape stubble, 5.3ha of the bean and oat mix, and 5.7ha of a diverse mixed crop comprising oats, vetch, phacelia, fodder radish and stubble turnips.

He finished Cheviot lambs on the oat and bean crop and grazed cattle on the diverse mix, spread 25t/ha of farmyard manure in the spring, and sprayed each crop off a few days before going on with the strip till.

He tilled the 3.6ha on 5 May and drilled maize the following day using GPS and autosteer.

“Although we could till and drill in one pass I prefer the flexibility of a two-pass system,” he says. “It allows us a window for the soil to dry out if it’s too wet; at a cost of £50/ha per pass, it’s worth establishing the crop right. For me, it’s not about cutting corners; maize is so valuable to us – that’s why it’s so important to get a good crop.” 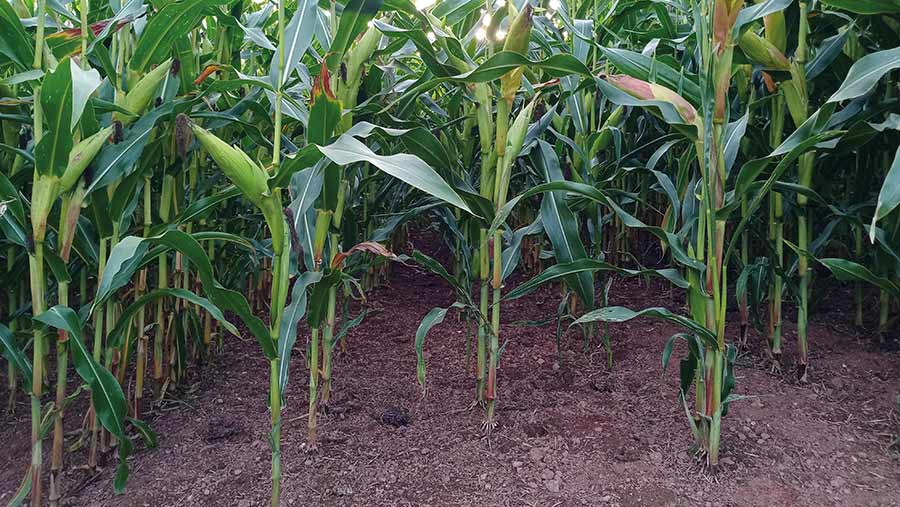 He then tilled the 5.3ha, after which it rained and rained. “We had 200mm of rain in May, which made for ideal conditions to trial the system,” he says.

He managed to get the rest of the maize sown at the end of May, and was delighted with the results. “Even on our poorer field the crop jumped out the ground. It was really vigorous.”

Using a new Kverneland precision maize drill, Mr Lee sowed the maize at 105,000 seeds/ha. Root growth was very good, there was no soil erosion, and the extra nitrogen fixed by the cover crops meant he could reduce his fertiliser costs, too.

“We applied 123kg/ha of urea down the strip till leg at 6in deep and then 80-95kg/ha of di-ammonium phosphate with the drill, so the seed had everything it needed right next to it.” Two fields then had 20 litres/ha of foliar nitrogen to push yields.

“I’m really pleased with how it all looked, from crop to crop and hedge to hedge,” Mr Lee says. “It’s been great fun working with Grange Machinery, and I’m just so pleased with what we’ve got now – it’s bang-on what we want.”

Having grown a range of varieties including favourites LG30207 and Asgaard, next year Mr Lee hopes to trial different varieties at varying fertiliser rates. “As we are boosting soil nitrogen, we could perhaps reduce inputs further.”

And there are establishment savings too. “We’ve had a 50% cost saving in establishing the crop: The bean and oat mix cost £50/ha to establish, but we got at least that back from grazing the sheep. The collaboration with Grange Machinery has yielded significant benefits in reducing the potential for soil erosion; with the cost savings and final results, it’s just been brilliant.”

One of Grange Machinery’s most popular bits of equipment is a low-disturbance toolbar which can be attached to different machines, enabling one-pass strip tilling and drilling.

So when James Lee approached the firm to develop a bespoke strip till, the ground work was already there.

Initially, they designed a modular system using the close-coupled toolbar – which Mr Lee trialled in 2019. Working together, they then improved the system, moving to a 3m fixed frame to get more even pressure across the width of the machine.

“It wasn’t firming down between the rows to create a platform for harvesting machinery,” explains managing director Rhun Jones. “Foragers aren’t light, and we want to help farmers get the crop off the field, not just into it.”

The second prototype, which Mr Lee used this year, included the ability to add fertiliser while tilling, and extra discs to cultivate the tilth in the strip.

“If there’s a hard crust on the surface the leg naturally wants to burst it left and right, so we’ve designed two wavy discs which can be hydraulically adjusted forward and backwards either side of the leg, to bring the tilth back into the 150mm strip,” says Mr Jones.

“The rear double staggered discs can be hydraulically adjusted to suit soil conditions, and shatter any clod which remains, to create a finer seed-bed.”

Finally, the Guttler Prism 560mm ring roller features high pressure points to break down the last of the clods and consolidate the strip properly.

“All maize drills use disc coulters and need a firm surface to bite into and travel,” he adds. “Better consolidation also gives a weather-proof finish so you can drill into it whenever you want.”

Grange is currently using the second prototype on farms around the country and will be bringing the final version to market this winter.

“It can be used on any row crops; vegetables, brassicas, sugar beet, oilseed rape and maize,” says Mr Jones.

“It’s been a big learning curve for us but we’re over the moon with how it’s developed. Farmers are being tasked to move less soil while focusing on yield and performance – compared to ploughing and power harrowing, this is a much more refined process.”

Having harvested the maize in early October, James Lee is delighted with the results.

“It was a very, very pleasing crop,” he says. “You couldn’t fault it for evenness – and although it was wet at the end of September the harvester glided over the soil surface, it left no mess and the conditions were ideal for direct drilling the following wheat crop.

“In the conventionally sown fields the wheelings caused noticeable compaction which we needed to cultivate out, but the strip-tilled fields were a lot more level with a lovely friable soil structure.”