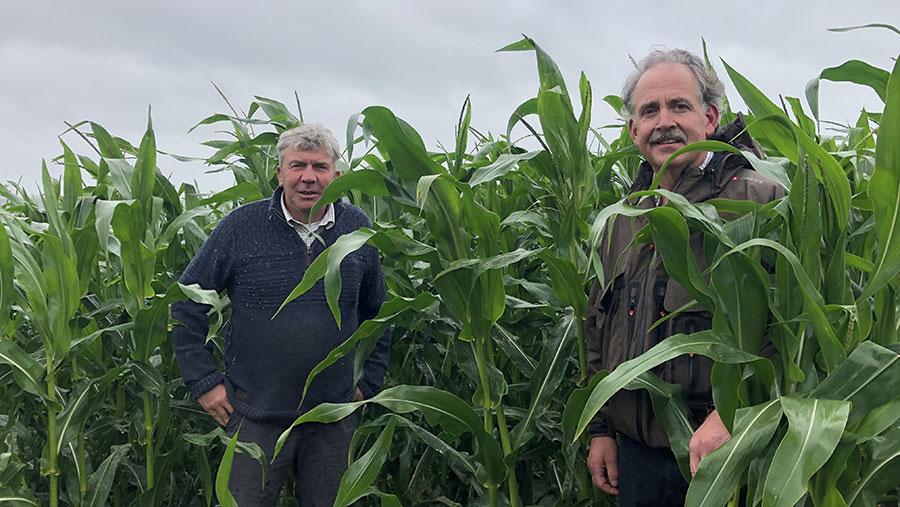 Unpredictable weather patterns this spring have resulted in very variable maize crops, with some fields already more than 1.8m tall and at the tasselling stage.

Dairy farmer Phil Allin is growing 24ha of the variety Isanto under plastic, which got off to a flying start and is now more than head high at the 240ha Fernhill Farm, near Holsworthy, Devon.

The monster crop was drilled on 10 April into heavy clay soils, for use as silage feed on the family’s 350-cow autumn-calving dairy herd, where a self-feeding system is used.

“Plastic allows us to drill earlier, bringing our drill date forward by one month, as the film protects the crop and allows us to have a longer growing season,” said Mr Allin.

Procam agronomist Barry Mills, who advises Mr Allin, said he had never seen such a profound difference in the growth stages of maize. Crops grown under film are racing ahead, while others grown in the open witnessed uneven establishment with significantly stunted growth.

“This season has the biggest difference in maize crops I’ve ever seen. Maize under film had the moisture and warmth it needed to get away quickly as roots successfully developed, while crops not planted under film struggled and just couldn’t get going,” said Mr Mills.

This is due to the degradable film creating a warmer environment which better suits the tropical maize crop’s development. It increases growth rates, with the first 21 days of growth happening in just nine days under film.

Crops under plastic are also less vulnerable to frost attacks, with Mr Allin’s maize experiencing hard frosts on three occasions during May, but luckily the layer of plastic reduced the effects of such extreme weather.

All of Mr Allin’s maize is grown under plastic, which costs £250/ha and plays an invaluable part in his dairy system.

It enables him to produce the same amount of dry matter as grass, with 20% less area used. This helps him work with limited land area and with the recent weather extremes.

The use of plastic has also brought harvest forward, reducing the risk of compaction on his clay soils, while also generating greater flexibility. This frees up about six weeks of extra time on the farm.

“Harvest is getting earlier and earlier and we are hoping to start on 15 September this year,” he added.

Yields currently achieve 28% dry matter and 38% starch, but with an even earlier harvest, Mr Allin expects dry matter levels to fall below his current average. However, he sees no problem in levels dropping to about 26% dry matter.

He also highlighted that slurry applications onto maize ground which is grown continuously on a three-year rotation and the use of his chisel plough, working at a depth of 5cm of the soil profile before power harrowing, enhances crop growth.

“Our soils are heavier and slower to process, so they need a good cultivation to allow the taproots to delve deeper into the ground. Using film doesn’t cure all issues, which is why we focus on cultivations, nutrition and soil moisture as well,” said Mr Allin.