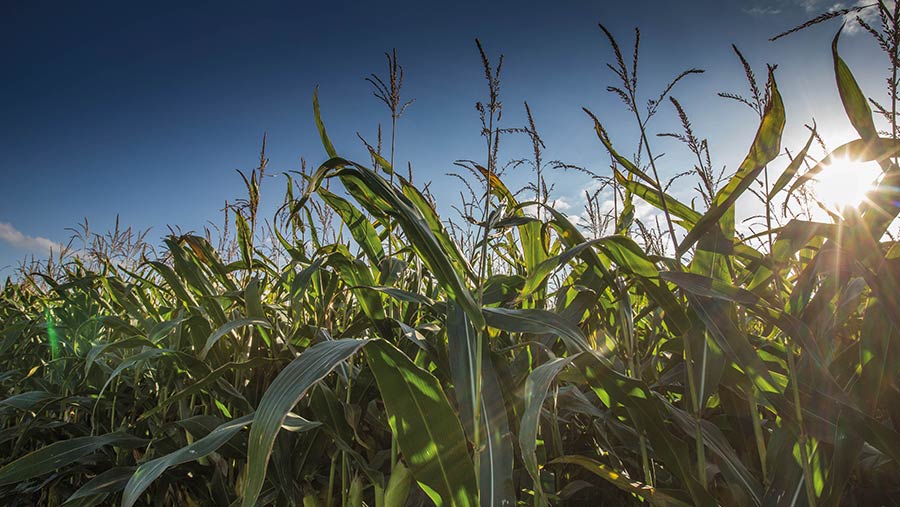 A trial run by agronomy firm Hutchinsons, at its Carlisle Regional Technology Centre in Cumbria, is investigating the impact of sulfonylurea herbicides on undersown grass in maize.

Maize plots were sown as normal in the spring at Smalmstown Farm, which has hosted the maize trials for the past 12 years.

Plots were then treated with different herbicide mixes, containing mesotrione and either nicosulfuron or prosulfuron (both of which contain sulfonylurea chemistry).

A Zocon Greenseeder drill was used to undersow a Westerwold Italian ryegrass mix between the maize rows at 19.8kg/ha, six weeks after drilling.

Trial agronomist Jim Clark explains that some of the undersown grass has been a bit disappointing this year.

“It appears the dry conditions early in the season meant herbicides lasted longer in the soil, and when rain eventually came, it activated the chemistry. Some yellowing in the grass was clearly visible as it took up the herbicide,” he says.

Grass growth performed best where straight mesotrione had been applied, indicating that it was the sulfonylurea element of the mixes that had the main effect on limiting grass growth.

The work could require growers to re-evaluate the herbicides used when undersowing maize, and the species of grasses sown, as their susceptibility to herbicide damage can vary,

Trials next year will experiment with different grass seed mixes to see which offer greatest tolerance to any potential impact from sulfonylurea residues – fescues, for example, are thought to be more tolerant.

“Undersowing research is definitely still a work in progress, but that’s what trials are all about,” concludes Mr Clark.