Cash flow has borne the brunt of higher diesel and fertiliser prices. But after a difficult autumn’s drilling, the partners at HBH Farming remain optimistic.

But the partners are still satisfied that the cash flow position is costing its parent farms less than £10/acre, despite the extra demand on funds.

As many farmers will appreciate, the culprits behind the bigger bills have been fertiliser and diesel and Mr Hildred has watched with resignation as red diesel prices have fallen to about 40p/litre in recent weeks, having bought at nearly 80p/litre in the middle of harvest.

But all three partners can take some comfort from the fact that due to the late, wet harvest, cash from sales will come into their trading accounts a month later than usual.

Bar a few really wet patches of ground, fieldwork has been completed successfully and crops are establishing well. Mr Hildred has continued with seed contracts, which form most of his combinable cropping. “But this year we’ve come back on ground nearer to home, at the expense of some offlying land which rises to 600ft.”

Of 1800 acres in the Hildred Farm Partnership, about 900 is in seed wheats and barleys this season. Varieties include Solstice, Viscount, Cassius, Panorama and an older Group 3 wheat, Wizard, favoured by Weetabix in Northampton. Other varieties are grown on contract for Nickerson, Masstock and Frontier. Grain is sold through Openfield, the new company formed through the merger of Grainfarmers and Centaur Grain. 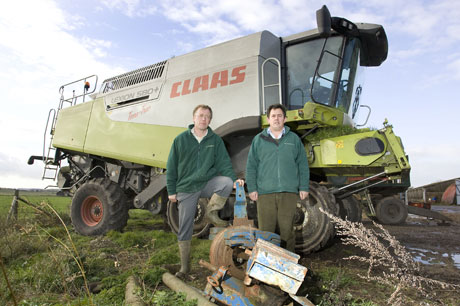 “Soils here suit seed production, and I’m lucky in that I’ve got a store with 12, 100t grain bins. It’s a contract farm, but is in the middle of our ground. The acreages that seed companies want now tend to be bigger, but we have the storage and can grow some unusual bijou varieties. Plus we can have a look at some of the new varieties coming through development.”

Mr Hildred’s main break crop is oilseed rape, occupying a further 200 acres, while 300 acres are in spring malting barley. Poppies are also grown for medicinal use on a specialist contract. “We’ve not cut back on our farmed acreage this year – we’re all in it for the long term,” he says.

He believes that 2009 will see a markedly different wheat harvest to the bumper, damp crop seen in western Europe in 2008, as disaffected farmers plant less this autumn and spring. “The price of wheat is so far below the cost of production, it just cannot last. It will come to an end when demand again begins to outstrip supply. However, I haven’t been as brave as two year ago, when I bought and traded futures contracts.”

Drilling has finished at Woodhouse, too, on its 900 arable acres. The estate grows 185 acres of Solstice wheat, on contract to Warburtons. There are also Group three wheats in the shape of Claire and Gladiator, and 150 acres of Splendour oilseed rape, a high-oleic low-linoleic acid variety for frying, favoured by McDonalds restaurants. This specialist crop is worth a £65/t premium over spot prices.

At Streatley Farm, Mr Bishop is satisfied with 500 acres of Solstice, Cordiale and Soissons wheats, as well as a large acreage of Cassata and Tipple malting barleys. “This has always been a successful malting barley farm. Historically, it all went to Wallingford Maltings and once upon a time, Woodhouse Estate grew entirely malting barley for Brakspear Brewery at Henley-on-Thames.

“Maltsters’ attitudes have changed in the past few years and they are looking for a specific number of dedicated growers to supply them with a quantity and quality they need. But people jumping in and out of malting barley doesn’t help anyone. I’m quite amenable to the idea of a three-year contract – it will be the way forward.”

But most millers seem reluctant to adopt that approach, he says. “Warburtons is the exception to that rule otherwise you’d never get that from a miller.”

Overall, drilling has not proved easy. “This is the first year we’ve not finished drilling to our complete satisfaction,” says Mr Bishop. “But we have a bigger drill this year, which at least means we can cover acres faster. It’s just been very protracted.”

The 6m Horsch drill has joined the partnership’s existing 4m Vaderstad. There is also another drill and power-harrow combination, which means the business has three drilling systems adapted to tackle the clay-with-flints, Thames Valley gravel and an unusual area of black “fen” land.

This last area has, historically, supported some field vegetables, but is now home to 300 acres of Gatsby wheat, picked for its resistance to Orange Blossom Midge and Septoria.

But that new drill is only as good as the drillman and all three partners are grateful for the extra effort from their staff in a difficult season. The business’ four-man team of Paul Stevens, George Davis, Steve Franklin and Geoff Hobden are now enjoying taking remaining holiday time plus dealing with cleaning grain stores down and loading the fleet of lorries collecting remaining grain, before machinery maintenance begins in preparation for spring cultivations.