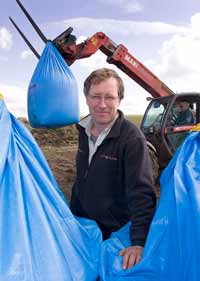 Rising costs and unpredictable grain markets are cause for concern at our Management Matters farm in Oxfordshire. Paul Spackman reports

With 8000 acres to farm, the partners of HBH Farming are understandably keeping a very close eye on the current rise in fuel and fertiliser prices.

Around 100,000 litres of red diesel is used each year across HBH, so any price increases are quickly felt. But likewise, even the smallest saving can make a worthwhile contribution to the bottom line, say Guy Hildred and Edward Bishop.

Mr Hildred is currently working with the Orion Farming Group, of which he is a director, to find a way of hedging the fuel price so that members effectively pay an insurance premium that refunds them if the fuel price goes above a pre-established threshold. “It’s something we’re still working on, but hopefully it’ll give us a bit more certainty when planning,” he says.

“There’s not a lot else we can do to about prices going up. We’ve got to buy the fuel and there’s only so much you can do to reduce consumption. The staff do their best to run the machines as efficiently as they can, but at the end of the day, the best way to reduce fuel consumption is to lift the plough or subsoiler up an inch or so.”

Both partners are also keen to hear what prices and terms are on offer when the new season fertiliser prices are announced. “All the talk is that fertiliser prices will be going up as well as fuel,” says Mr Bishop. “We’ve already bought some Cropcare concentrated PK fertiliser [processed poultry manure], which should reduce the amount of artificial fertiliser we need to buy. At £125/t spread, the 0-14-14 fertiliser makes financial sense, he says. “If we were buying the equivalent as MOP, it would probably cost nearer £160/t and it would still have to be spread.”

As for nitrogen, Mr Hildred is waiting to see what prices and delivery terms GrowHow and Yara announce before deciding whether to buy early. “If they insist delivery has to be in August to get the early season price then we won’t be able to buy it all because the sheds will be full. But if we can get the early season price for delivery later in the year, then I think buying everything early is the way to go.”

The current uncertainty in grain markets is causing further dilemmas for the partners of HBH. “We really don’t know what corn prices are going to do,” says Mr Bishop.

So far both partners have committed about three-quarters of this harvest’s oilseed rape tonnage at around £240/t and their Cassata winter barley has been sold forward at £130/t. None of Mr Bishop’s 2010 wheat crop has yet been sold, although he has fixed the premium on 500t of Cordiale at a minimum of £15/t over feed, or £5/t below the Group 1 price. Mr Hildred has sold 400 tonnes of feed wheat at £100/t for October movement, but is reluctant to commit much more.

“We’re very unsold this year,” he says. “Normally I’d have committed three times this amount by now, but this year’s a bit more of a gamble. I still think the pound’s going to fall a bit more against the euro which should help export demand and when you look at places like Ensus coming on stream, there could be pretty strong demand in the UK this year. Also, the weather’s been pretty dry so far this spring and who knows what yields could do.”

Sheep holding their own

Meanwhile, at Streatley Farm, lambing of the 1300 Suffolk mule-cross ewes went well this spring, says Mr Bishop. The overall lambing percentage is around 1.5% including ewe lambs, with the first 900 ewes averaging nearer 1.8%.

The lambs will be fattened on grass, with the first batch of 38kg lambs due to be sold through Thame market in two or three week’s time. A few will also go to a local butcher. “The sheep aren’t a massive money spinner, but they’ll certainly hold their own this year,” Mr Bishop says. Last year’s ewe lambs started selling at £67.50 each, with some reaching £90 and an average nearer £72. “Hopefully we’ll average around the same this year.”

The high cost of replacements is the only downside, he notes. “I don’t really want to be paying more than £65 for replacements, but with cull ewes fetching £70-100, at the moment it’s still worthwhile and I don’t see our flock size coming down.”