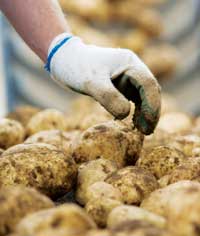 Potato prices have jumped again over the past week, with delayed early harvesting and lower than usual imported supplies boosting new crop values.

New crop planting is almost complete in the south and west, where lifting of early varieties continues at a slow pace. “Prices in Cornwall have eased slightly to £1400-£1600/t,” said the Potato Council’s latest report. “Jersey deliveries remain limited as growers clear crops which have not reached full potential. Dry conditions continued to the end of last week with no rain recorded for over three weeks. Crops were beginning to suffer and irrigation was being used where possible in an attempt to increase recent slow bulking rates.”

Heavy rain and frequent frost during the winter in most Mediterranean, northern European and Middle Eastern countries had a large effect on early potato production, it added. “Production in Israel is estimated to be 30% lower and plantings in Spain are 50% down compared with 2009. The Cyprus spring crop was damaged by flooding and frost, with an estimated 30% drop in yield.”