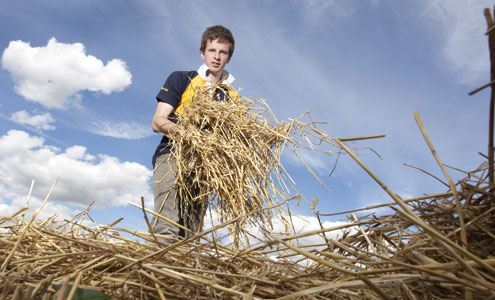 Harvest finished on 6 September with some winter beans which, given they’d received a near blight-like spraying programme of fungicides to keep them disease-free (five treatments in total), thankfully yielded pretty well.

While we’ve been very lucky with weather and soil conditions, I’m aware that many around the country probably hadn’t finished – or even started – wheat by September. I hope by now things have shifted in your favour and you’ve been able to “crack on” and get finished.

Although no bumper crops of wheat were achieved here this year, near record-breaking crops of almost wire-like straw were. The combine didn’t like it, and the chopper liked it even less, creating a slight problem wherever we didn’t bale. As a result, the plough has turned more furrows than it has for years – proof that it’s still a useful tool? One positive is that conditions for ploughing have been great this year, with fields that normally need fighting with multiple power harrow or press passes to get a good seed-bed are in almost drillable condition after just one pass with the power harrow.

After what can only be described as a disaster year for blackgrass, every step possible will be taken this year before drilling, with cultivation choice and multiple, good stale seed-beds. And at the time of drilling the worst-affected fields, the pre-ordered rain will get the crop off to a good competitive start! Good robust pre-emergences will be the aim of the game this year; I’m even trying some angled nozzles in the hope of finding that extra ‘oooomph’.

On the subject of pre-emergences, if anyone has any magic ideas on how to remove that yellow stain from sprayer wheels/tanks that always seems to appear, no matter how careful you are, could they please let me know.