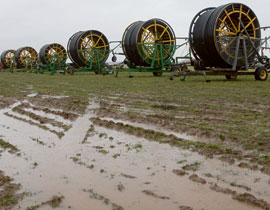 Mr Paice made the comments during a radio interview about the impact of the drought during the Cereals Event in Lincolnshire.

“We need to find ways of encouraging and enabling farmers to develop more sophisticated ways uses of water.”

Mr Paice said the government was looking at extending grant support to farmers who want to build reservoirs to store water.

It was also looking at making abstraction licences tradable so farmers could sell abstraction rights to other growers.

But water restrictions for agriculture were inevitable, he suggested.

“Quite clearly, if we are going to have continued summer shortages of water in our rivers and watercourses, daytime abstraction licences are bound to become more expensive or more difficult to come by.”

Responding to the programme, Melvyn Lay, executive secretary of the UK Irrigation Association, said it had highlighted the importance of irrigation in food production.

But he described Mr Paice’s comments about overhead irrigation as unhelpful.

Mr Kay said he was “not sure” about what Mr Paice meant about “wasteful” overhead irrigation systems.

“This kind of ‘throw away’ comment is not helpful and I suspect efficiencies are quite high at the moment,” said Mr Kay.

This was particularly the case when supplies were scarce and farmers were paying between 40-80p/cu m to apply water, he added.

• The full radio programme, including the interview, can be heard here.