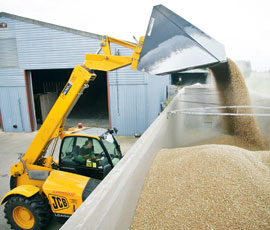 Farmers still have a few crops to salvage near Durham, and crops are extremely variable, according to Farmway’s central store manager Andrew Darling.

Frequent breakdowns had added to the tricky harvest, he said.

“The silo has had an interesting season. If it can break it seems to have done this year, and for some reason it’s never a cheap repair or cheap part. Some parts have had to be shipped from Europe.

“We’ve got one farmer with a day’s worth of combining left and a number of farmers who have wet spots which the combine is unable to travel over,” he added. “We’re hoping it will dry enough to try and salvage it.”

Winter Barley had averaged a bushel weight of 62kg/hl across the store, with conventional varieties outperforming the hybrid varieties.

Spring barley had done much better, with specific weights comfortably over 63kg/hl.

“On the whole barley has been nothing special but nothing disastrous,” said Mr Darling. “Yields have stayed no more or less than the five-year average, I’d say.”

Hybrid barleys hadn’t performed well this year. “But for the past few years they have been brilliant. You cannot predict what will happen tomorrow, let along the growing season for next year.”

“We’re nowhere near the yields of last year. But last year was a bumper year, so farmers may be a tonne down on last year, but closer to 0.4t/ha below the five-year average.”

Wheat yields had been unexciting, at between 5t and 8.75t/ha, with an average bushel weight of 68 kg/hl.

“We’ve had extremes of bushel weight, with some as low as 56kg/hl and some as high as 77kg/hl,” said Mr Darling.

“We’ve not had any full specification quality wheats, but we’ve passed a large amount at a low grade specification.

“The more tried and tested varieties like Alchemy seem to have held up slightly better this year, as they’ve been a little more resilient.”