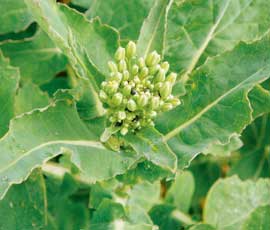 Some forward oilseed rape crops are already reported to be at the green bud stage, and with pollen beetle risk arriving earlier this year, a new online prediction model aims to help growers improve their targeting of insecticides and minimise use.

A short, intense flowering period has been predicted, which will give the crop less opportunity to compensate for the damage caused by the pest, according to Chris Charnock, oilseed rape technical and solutions manager at Syngenta.

“Growers need to be alert for the first signs of pollen beetle activity, and be ready to treat as soon as thresholds are reached.

Spraying at levels below threshold has been frequent in the past, which has caused the widespread pyrethroid resistance now found across the UK.

Validating the model was one outcome of a jointly-funded DEFRA-LINK and HGCA research project led by Dr Cook. It also aimed to develop a monitoring trap for the oilseed rape pest.

Data was gathered over a four-year period from traps distributed evenly across the UK rape area on 150 sites and run by growers and advisers. Information was then passed on to proPlant for comparison with the model.

“We were very surprised at how accurate the model proved to be, although in the first two years it was less accurate on the prediction of when pollen beetle migration finished,” says Dr Cook.

After the inaccuracy was identified, the model was modified using trapping data, and the final two years of the study showed it could also give a very accurate prediction of when migration would finish.

“I believe it could save unnecessary sprays that are sometimes applied as insurance or just before migration finishes, when thresholds are unlikely to be reached,” Dr Cook explains.

The yellow sticky traps were designed as part of the project, using an extract from oilseed rape – as a pheromone could not be found specific to the pollen beetle – and used when the crop was susceptible to damage, through green to yellow bud growth stages.

“We were unable to find a relationship between what we were finding in the trap and what was in the crop, therefore, it couldn’t be calibrated to produce a threshold that a spraying decision could be made from,” explains Dr Cook.

Despite the failure to produce a threshold, the traps could still be used as a useful tool to monitor beetle migration and indicate when the crop should be checked, she adds.