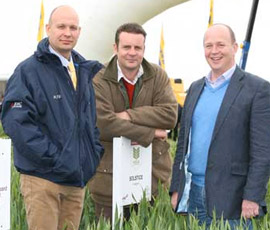 This year’s winner of the Nabim/HGCA wheat challenge is farm manager Andrew Robinson (pictured left) of Heathcote Farms, Toddington,  Bedfordshire. It was his enthusiasm, attention to detail and marketing strategy that impressed the judges most.

The competition set out to find the country’s best milling wheat grower judging entrants on their ability to consistently grow high quality crops and having a sharp eye on cost of production and marketing.


Mr Savage says: “Andrew Robinson was absolutely on the ball with every aspect of wheat production. The whole farm was the same; the attention to detail was impressive.


“He put staff at the top of his list and empowered everyone around him.”


Mr Thornton adds: “He really knows his stuff, he doesn’t take a short term view on things instead he uses good solid practises to remedy problems.”


The panel were impressed by all the finalists, who all regarded their success as a real team effort. In fact, both losing finalists had assistant managers who were regarded as pivotal for the direction and success of their businesses.


Mr Robinson’s strong future vision for the UK milling industry caught the judges’ attention. “His vision is for milling wheat production to become even more specialised within the UK as a centre of excellence that is recognised on a global scale,” says Mr Savage.


“Andrew Robinson was absolutely on the ball with every aspect of wheat production. The whole farm was the same; the attention to detail was impressive.”
Martin Savage, Nabim

Mr Robinson manages a range of soil types growing wheat, oilseed rape and winter barley, with a strong emphasis on attention to detail. He is Basis-qualified and uses the services of agronomists Chris Green of CMI and Jock Wilmott of Strutt and Parker.


“There’s nothing he does that hasn’t had a lot of thought put into it,” says Mr Savage.


“In his view it is consistency of seed-beds, seed rates, nitrogen and fungicide timings that are important, combined with using solid practises like rotation, cultural controls, soil organic matters and drainage as yardsticks,” says Mr Thornton.


The judges liked his marketing risk management, whereby he separated out any premium from his costs. “This gave him a clear idea of what the scenario would be if the wheat failed to attract a premium and gave him a baseline figure, allowing him to cut his cloth accordingly,” says Mr Thornton.


Mr Robinson manages to achieve a premium on 85% of his milling wheats by acting on information gained from the market. The judges were impressed by the collaborative approach with the end user and felt the benefits were mutual.


His marketing strategy hinges around selling one third of the crop early in the season with the remainder being sold throughout that trading season.


The judges praised Mr Robinson for his efforts in the local community where he engages with the parish and local schools. He raises the profile of the use of grains, not only how they are being produced but where they are going to be used in the food chain.