The planting of winter crops has been extremely challenging, leaving farms with late drilled and lacklustre wheat crops following the unprecedented rainfall in much of the UK.

As the warmth starts to creep into the climate and soils, resilient crops are starting to grow away, but they will need coaxing through the coming months to ensure that they yield as much as they can.

Soil mineral nitrogen levels are low where soils stood wet over the winter and making the most of the applied nitrogen is vital.

Xemium® has been proven to have non-fungicidal effects on the crop including the improvement of the crop’s use of applied nitrogen, enhanced green leaf retention over and above disease control, more efficient photosynthesis.

Yellow rust threat has already been reported, even on “tolerant varieties”.

The recent report from UKCPVS indicates that there are new yellow rust mutants out there, it stated:

“Most varieties known to be relatively resistant to yellow rust (ratings 7–9) continued to perform well in the 2019 inoculated trials.

However, some varieties reacted to a single isolate.

It is the first time this virulence combination has been detected in the UK.”

The priorities are T1 hinge on yield-building, tailoring programmes to a crop’s potential and disease risk.

Arguably, this year it will be more important than ever to take a prescriptive approach given the wide diversity of crop states, growth stages and health.

Yellow rust pressure, given the new pathotypes, is the disease to watch this season, particularly where a T0 hasn’t been applied.

The T1 spray should help protect the fully emerged leaf 3, primarily against Septoria, as well as rusts and mildew. It is also the timing for the control of eyespot.

The optimal time is soon as leaf 3 is fully emerged, which is usually at GS32, but this year this could be very variable by crop.

What level of spend is justifiable?

There are several different scenarios this season.

A minority of crops were sown in reasonable conditions before the end of October, the rest are later sown, and at this stage of the season may look lacking in promise.

Early sown crops have excellent yield potential and there is no reason why they should not perform well at this stage of the season.

However, late February sown fields, even of the cleanest variety, will still respond to some level of fungicide input.

The challenge is selecting the appropriate input for the specific situation.

Adexar® would be a sensible choice for 2020 T1 sprays in many of the later sown situations.

The combination of Xemium® – regarded as the market’s strongest SDHI – and epoxiconazole, the best of the older azoles for rapid rust control.

Nitrogen use efficiency is enhanced by Xemium®, this will be helpful particularly on later sown cereals. 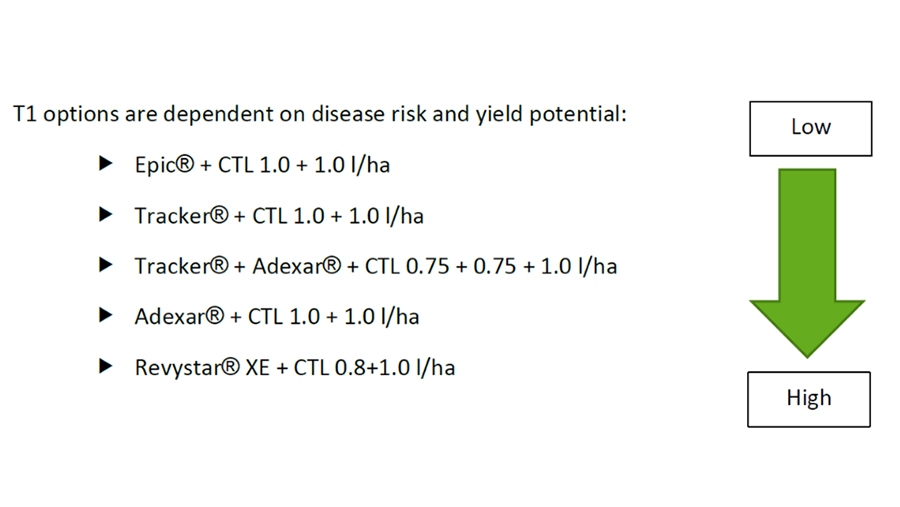 In all cases, the addition of chlorothalonil is recommended

Use plant protection products safely. Always read the label and product information before use.

For further product information including warning phrases and symbols refer to www.agricentre.basf.co.uk

Ensure all warnings and restrictions on all labels are adhered to.