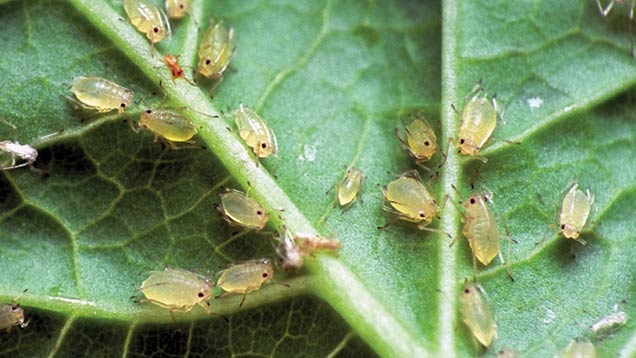 The ban on neonicotinoid insecticide seed treatments in oilseed rape has led to a huge spike in a key potato virus vector in Scottish seed crops this season.

Losing the controversial seed treatments in oilseed rape caused growers in some parts of eastern England to have their crops ravaged by cabbage stem flea beetle.

Levels of turnip yellows virus (TuYV) – carried by the peach potato aphid, Myzus persicae – also reached unprecedented levels as rape crops were left unprotected against the vector through its most susceptible stage.

Where aphids were left unchecked last autumn, many were able to survive through the mild winter. Once rape crops began to senesce, aphids took flight into surrounding potato crops.

Andy Evans, leader of Scotland’s Rural College applied practice team, says it is of a particular concern for Scottish seed potato growers, as Myzus is the most important vector of persistent and non-persistent viruses.

Virus infection over the threshold set out in the potato seed certification scheme guidelines results in seed crops being downgraded at considerable cost to the grower.

“There was an unprecedented spike of myzus through July in suction traps and yellow water traps for about a week and it coincided with oilseed rape crops starting to turn,” says Dr Evans.

“We are unsure of virus infection levels [in seed crops] as a result, but those growers using the right insecticides at the right time should be OK.”

Myzus is a particularly difficult aphid to control as the UK population is almost completely resistant to organophosphate, carbamate and pyrethroid insecticides.

It is a concern to Dr Evans that some seed potato growers continue to use pyrethroids to control myzus in their crop, despite the chemical group having little activity against the pest.

He suggests that growers should adopt a cross-crop integrated strategy to control the pest in order to avoid any significant impact on seed crop health in future seasons.

This would mean taking advantage of “resistance busting” foliar insecticide products in both oilseed rape in the autumn and seed potato crops when they move from oilseed rape in July.

Approved and effective treatments for myzus control in oilseed rape include neonicotinoid product Biscaya, along with Plenum.

The same products are available in seed potato crops, with the addition of neonics Actara and InSyst as well as Teppeki.

Dr Evans says seed potato growers should use a foliar insecticide active on peach potato aphid in their oilseed rape crops in the autumn and communicate with neighbours to do the same, even if it means sharing the cost.

“Monitoring [through aphid alerts and in-field traps] to pick up risk and using the right pesticide combinations in oilseed rape and seed potato crops will also help to get control right,” he adds.

Resistance to neonicotinoid insecticides is already widespread in southern European Myzus populations and they could find their way here. Another risk is that UK aphids could develop resistance.

This could spell disaster for the seed industry, with very few alternative methods of controlling virus spread in crops.

Sue Cowgill, research and development project manager at AHDB Potatoes, says that both routes to resistant peach potato aphids are possible, but there is no evidence of their presence in the UK so far.

“The thing to stress is implementing a good resistance-management strategy. Stick to rotating products with different modes of action,” adds Dr Cowgill.

Belchim marketing and development manager Simon Leak says there is a concern that a narrow group of actives is being relied upon for Myzus control in oilseed rape, which could encourage resistance and impact on control elsewhere in the rotation.

The company is seeking emergency approval for this purpose for the second successive season for its flonicamid-containing Teppeki.

The Chemical Regulations Directorate (CRD) rejected its first application, but Belchim is pressing ahead with a second and hopes to convince regulators of Teppeki’s potential contribution to resistance management this season.

“We don’t believe there are enough alternative products for turnip yellows virus control in oilseed rape and we haven’t given up this season,” says Leak.

“Teppeki is in the process for a full approval for aphid control and we hope to get it, but it won’t be in time for this season.”