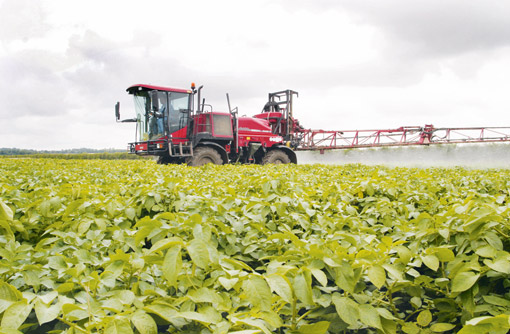 The very early discovery of a new potato blight strain doesn’t mean that spray programmes will have to change this year, agree researchers and agronomists.

Found for the first time in the UK last year, the new blight strain 33_A2 (known as Green 33) is on the increase in The Netherlands, where it accounts for about 20% of the blight population.

The fact that it has made its way to the UK shouldn’t alarm growers too much, believes David Cooke of the James Hutton Institute, who points out that it was found in potato volunteers in a carrot crop in Norfolk.

“Two isolates were identified and are being tested. They came from the same outbreak in a single field, right at the end of the season.”

There’s no evidence at this stage that green 33 is any more widespread, or that it is less sensitive to the widely used blight active ingredient, fluazinam, despite one field trial which suggested that it might be, he continues.

“We’re awaiting confirmation on its status,” he reports. “We don’t have all the answers yet, but will be in a position to give growers more information shortly.”

The trial which raised the fluazinam sensitivity question was an inoculated experiment in The Netherlands, where rates were low and spray intervals were stretched, so was not representative of a field situation, he adds.

Despite that, Dr Cooke believes that growers should be made aware of any new threat, no matter how early it is identified. “We’re in a good position to monitor populations carefully and stick to best practice when it comes to spray programmes.

“We also know that these new strains tend to be aggressive, and that populations can change rapidly. So vigilance is essential and growers need access to all the information that we have.”

He highlights the role of volunteers. “The fact that green 33 was found in volunteers shows that they can have a major part to play in spreading blight. It’s not a new message, but it is a very important one.”

That’s a view shared by Lincolnshire-based independent agronomist Sean Sparling, who stresses that growers shouldn’t let dumps become a source of infection. “Good hygiene is critical. It always has been and that’s not going to change.”

He doesn’t anticipate making any changes to blight programmes for 2012. “The new strain isn’t an issue for commercial crops, so we will continue to use a whole range of active ingredients, as before, with attention to sticking to the right spray intervals.”

Fluazinam has particular strengths, as it is anti-sporulant and controls oospores, he explains. “That’s why a programmed approach is important. Good blight control comes from using the various products correctly and maintaining spray intervals.”

But he will be monitoring crops carefully. “We’ve been given an early warning of a potential change to blight populations. That’s very useful and we’ll be keeping our eyes open.”

Gary Collins of the Potato Council believes the bigger change for 2012 is the swing from 13_A2 (Blue 13) to 6_A1 (Pink 6) as the dominant blight strain, and suspects that the weather played its part in the change.

“It was warm and dry when Blue 13 started to develop last year, so nothing happened. The damper weather came later on, which suited Pink 6.”

As both strains have a similar impact, growers should carry on as normal, he continues. “Don’t change what you’re doing. Be vigilant and look for blight, base your sprays on weather and local infection risks and pick your blight products accordingly.”

Mr Collins praises the work of the blight scouts, who were responsible for finding the new strain last year. “The fact that it was discovered is due to them. We do tend to get the strains that Scandinavia and The Netherlands have, just a few years later, which is why we must carry on with the genotyping work.”

Don’t dismiss the threat of oospores and their potential to cause early season outbreaks, warns Dr Cooke.

A succession of dry springs in recent years has reduced the risk at planting, he notes, but stresses that there’s no room for complacency.

“We have had a few outbreaks from oospores, which result from sexual reproduction between the A1 and A2 mating types. When that occurs, there’s the potential for rapid changes to the pathogen, which can make the disease much harder to control.”

Warm, wet conditions between planting and emergence will favour oospore germination, he explains. “That will give an early, aggressive outbreak. So growers should be aware of this threat and investigate any signs of plant death.”