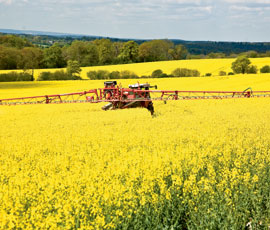 Oilseed rape was worth just over £393/t ex-farm on a spot basis as Farmers Weekly went to press, and about £377/t for July, as available, with some variation depending on location. Although rain would probably see the market dip, the fundamentals point to a firm outlook.

Analyst Oilword recently estimated the 2011 EU oilseed rape crop at 20.1m tonnes, which is a three-year low and compares with 20.6m tonnes last year and a record 21.7m tonne harvest in 2009.

Germany appears to be the worst affected European country, with a recent farm co-op estimate slashing harvest size there by 500,000t to 5.2m tonnes.

The rise in new crop prices was purely weather driven, said United Oilseeds managing director Chris Baldwin. But rain at this stage may not fully make up the deficit the season’s dry conditions had created, he said.

Openfield’s head of oilseed rape John Thorpe said that the market was well supported, with a lot of buying interest, but he also warned that global events could affect markets unexpectedly.

“The market is an interesting one. We are starting at a high price which, with bonuses, is not far off £400/t. If we get a lot more selling at harvest then we will get some pressure.”

Looking further ahead to the 2012 crop, ex-farm equivalent prices were around £350/t, not a bad price when it was likely that every possible arable acre would go into a crop in that year, said Mr Baldwin.

Although there is little buying interest from UK crushers, old crop rape is moving for export, with further falls in the value of sterling keeping UK prices very competitive. Mainland Europe has also been importing seed from Australia.

“The European market is looking to remain finely balanced unless record yields are achieved in Europe, as demand for rape oil for industrial and food use is expected to be strong,” said HGCA analyst David Eudall.

Canada’s oilseed rape area is set to increase by more than 14% this year, but drilling is roughly three weeks behind schedule, having been badly delayed by prolonged cold weather and snow cover.

At an estimated 22.3m tonnes in 2011/12, the EU is likely to crush a similar tonnage to the current season, which would mean importing some seed, probably from Ukraine, said the HGCA.