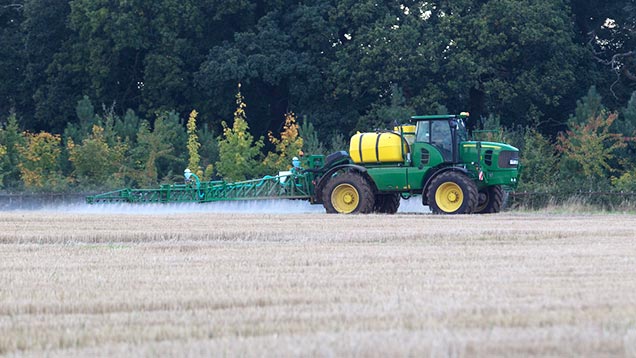 A straight form of key herbicide active flufenacet is set to increase growers’ options for tackling grassweeds this autumn, including resistant blackgrass and annual meadow grass.

Agchem firm Certis launched Sunfire and System50 earlier this week for use this autumn.

Certis’ arable product manager Inez Cornell explains: “Flufenacet has been available in mixture products for a number of years, however, it has not been available on its own until now,” she says.

Both Sunfire and System 50 contain 500g/litre of the active.

“Making flufenacet available as a straight product will give growers and advisers more flexibility to create bespoke programmes for each field on the farm.”

She adds: “Control of blackgrass must be approached as an overall strategy, using every tool in the box – rotation, ploughing, delayed drilling, spring cropping and competitive varieties alongside herbicide options.”

Independent weed specialist Stephen Moss pointed to research showing that the overall trend is one of increasing herbicide resistance in post-emergence herbicides, with the efficacy of the ALS inhibitors (sulfonyl ureas) and ACCase inhibitors (fops and dims) showing the steepest decline in their ability to control blackgrass.

“Of all the pre-emergence herbicides tested in comparative container studies, flufenacet gave the greatest level of control across all populations of blackgrass,” explains Dr Moss.

The key point is that of all the active ingredients tested, flufenacet is less affected by resistance.

On a practical level this means there is a much smaller drop in the year-on-year efficacy of flufenacet and less likelihood of selecting for resistance, in spite of the fact flufenacet is being used widely already.

“So, by using a range of different modes of action, you can actually slow the development of resistance,” says Dr Moss.

“The emphasis now must be on a more rational use of pre-emergence herbicides in combination with non-chemical methods to control blackgrass,” he says.

“Flufenacet should be seen as an essential component of any pre-emergence programme aimed at controlling resistant blackgrass.”

Both can be applied to winter wheat and winter barley crops, up to GS23 or before 31 December in the year of planting.