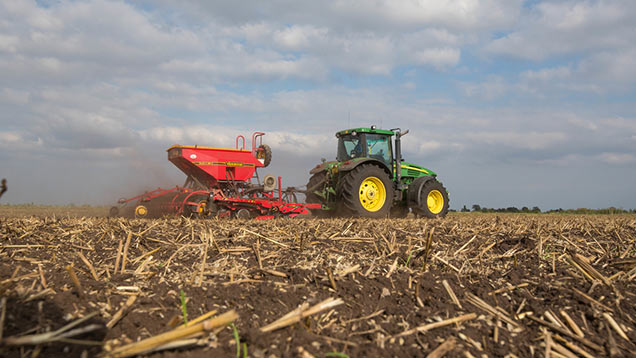 Farm leaders have submitted a second request to Defra for growers to use neonicotinoid-treated oilseed rape seed this autumn – after their first application was rejected.

The NFU said its application was for the emergency use of neonicotinoid seed treatments in areas under the very highest threat of flea beetle damage for autumn drilling.

It said the latest application was much narrower than previous applications – and called on Defra and the Chemicals Regulation Directorate (CRD) to make a decision urgently.

Defra has the power to allow farmers to use neonicotinoid-treated seed – despite an EU-wide ban introduced amid concern the chemicals are harmful to pollinators, including bees.

The NFU disputes the assertion that neonicotinoids kill bees, insisting the chemicals are a vital weapon for farmers in the battle against pests such as cabbage stem flea beetle.

“Without this treatment, growing one of the most important crops in the UK sustainably is becoming nearly impossible for many farmers.”
Mike Hambly, NFU

“The CRD’s application process has put us in a position where treatment and distribution of the seed may not make it in time for drilling.

“We realise the use applied for isn’t as wide as is needed; flea beetle has devastated many crops across the country and we have limited foresight of where the pest will emerge next season

“But we hope by making this second round of applications, we can provide relief from the pest for at least some farmers.

“It should demonstrate in field why neonicotinoid seed dressings are so important when it comes to establishing vigorous crops of oilseed rape.”

NFU combinable crops board chairman Mike Hambly said the union was “very aware” of the threat of flea beetle attack on oilseed rape crops being a widespread problem across the country.

Neonicotinoid seed dressing was an effective and targeted way of protecting crops from flea beetle and the pest was increasingly resistant to older products.

“Without this treatment, growing one of the most important crops in the UK sustainably is becoming nearly impossible for many farmers,” said Mr Hambly.

He added: “We must see a timely response from Defra and CRD so we can move forward with the logistics of seed distribution if approved.”