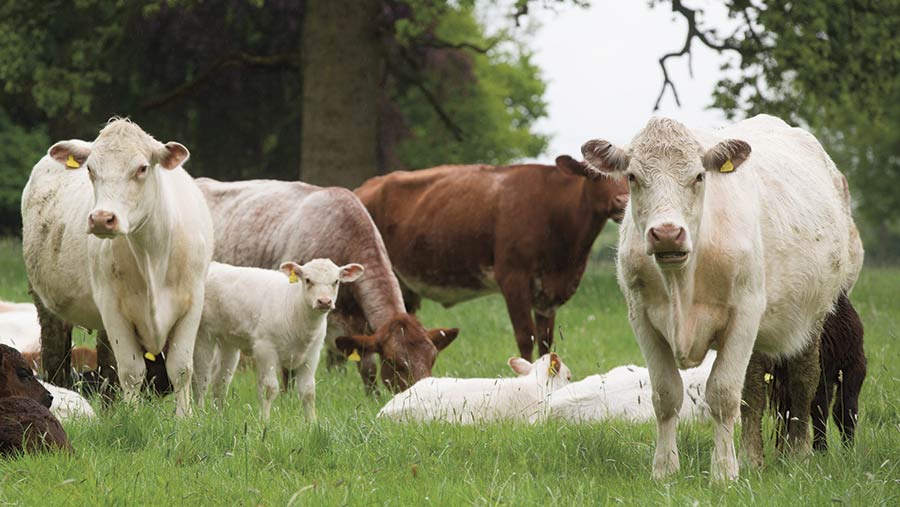 Brothers John and Paul Cherry are starting to reap the benefits of their no-till farming system with healthier soils and cattle feasting on herbal leys in the arable rotation to control blackgrass.

The worst blackgrass fields on the chalky boulder clay near Baldock are now contributing to a profitable grass-fed beef enterprise, rather than growing loss-making crops of winter wheat.

“The soil feels so much better and smells more like healthy soil,” says John.

One benefit of having healthier soil, which has become apparent this dry spring, is that their crops are largely holding up, due to the higher organic matter content.

Livestock in the arable rotation part 4

This is part four in our monthly series looking at livestock in the arable rotation.

Catch up with part one in the series, which showed how sheep were making the most of vegetable waste on light land in Suffolk.

Part two in the series examined how sheep and cattle were helping the battle against blackgrass in East Yorkshire.

Part three was a visit to Hampshire farmer Tim May to understand the radical decision he’s made to turn half of his 1,000ha arable estate back to grass.

John highlights that in one field that has been tested, soil organic matter content has risen from 2% to 5% in the six years since going no-till.

Their no-till journey started in 2011 when they ditched min-tilling and bought a John Deere 750A direct drill. The reason was a growing blackgrass problem, recalls John.

”Min-tilling is a good system, but the blackgrass loved it with the weed seed being mixed in the top few inches of soil.”

Paul recalls that it was having a big impact on yields. “You would pass through a patch on the combine and see the yield meter plummet.”

No-till was the next step to avoid the soil disturbance that stimulated germination of the blackgrass seed, but they were unsure whether it would work on their chalky boulder clay.

There has long been a perception that direct drilling only works on lighter land.

However, they visited other farmers, including Tony Reynolds in Lincolnshire, who were making it work on heavier land, giving them the confidence that no-till could work on their chalky boulder clay.

They also looked to the US, where some farmers have been practising no-till for a longer time, mainly to reduce soil erosion, but also to reduce costs.

John recalls one recent trip where he met farmers who had been using no-till for 30 years, resulting in soils with much higher infiltration rates, which were, therefore, better able to withstand intense rain.

One farmer had soil that coped with 33cm of rain falling in two hours, while his neighbours experienced flooding, he says.

“It was incredibly inspiring. The soil was really healthy looking and it is something that we can aim for in 20 years’ time.”

One surprising lesson from the US was the valuable role of livestock on soil health.

“A lot of Kansas farmers have brought animals back into their rotation and they claim it has been a game changer,” says John. The concept of grass-fed beef is growing in the US, with consumer interest rising.

“Cover crops are useful and are fantastic, but they said it was the animals that have made the biggest difference,” he recalls.

However, the brothers acknowledge that the climate is different, as farmers over there can rely on a hard winter to kill weeds and pests and they have a short, hot summer.

So the challenge is to find a way of replicating the US mixed farming system in a temperate climate.

John and Paul’s aim is to recreate the US prairies with mob stocking to try to create herb rich leys that produce fertile soils rich in organic matter.

They already had an established herd of beef Shorthorn cross suckler cows, which has now grown to the current 130 head.

Stores are sold on, with a number taken through to finishing. The low-input system is based on grazing, silage or straw with no concentrates, hence pasture-fed.

The Cherry’s already had grassland in their arable rotation with two-year leys used for producing horse feed. 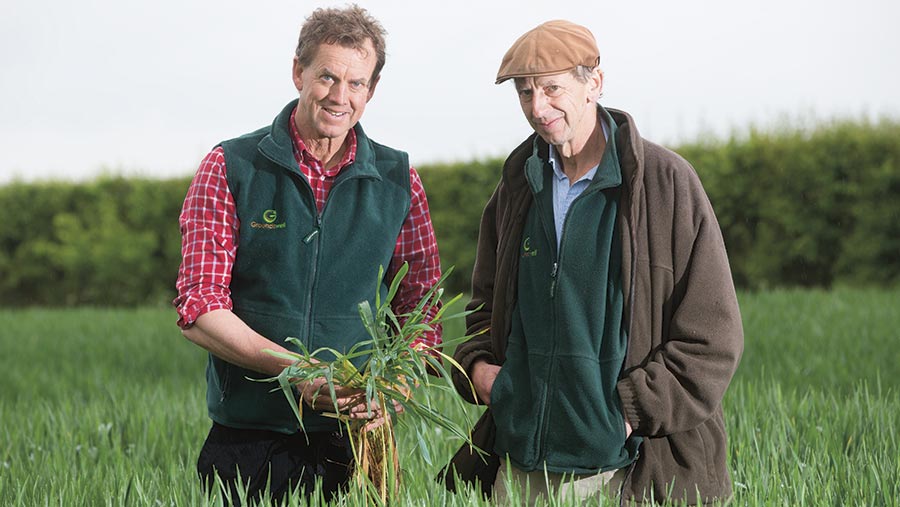 These have been replaced with four-year fertility building herbal leys, which include 19 different species of grasses, herbs and legumes including sainfoin and chicory.

Grazing is high impact with a high density for a short period of time (a day or less) followed by a long rest period of up to two months.

The aim is to graze grass prior to the seed head being formed with cattle eating the top third.

“This provides an ideal mix of nutrition, fibre and trace elements,” says Paul.

The beef shorthorn crosses are doing well on the system and the Cherry’s are getting a 20p/kg premium, selling beef under the Beef Shorthorn marque in Morrisons stores. In addition, they are currently going through the Pasture-Fed certification scheme.

Another benefit is blackgrass control. The grassweed has grown back in some leys and headed, but grazing eliminates seed return.

The hope is that blackgrass numbers will dwindle in time for when the current leys return back to cropping next season.

The beef cattle are also grazing cover crops, which are another vital part of the system along with the greater area of spring cropping.

Their philosophy is to ensure there are crops always in the ground with cover crops going in straight after the combine. They opt for a multispecies mix, aiming for a range of different rooting depths and architecture.

Other than reducing erosion risk, the reason for continually having crops in the ground is that they feed the soil microbes, explains John. Plants exude sugar into the soil; for some plants, half can end up in the soil.

Looking to the future, their system will continue to develop as they learn from their on-farm experimentation.

This has been vital because there is a lack of no-till research and advice in UK conditions.

For example, the brothers are currently trialling spelt wheat. Old-fashioned taller cereal crops like einkorn and spelt have allelopathic effects on weeds and they seem to give blackgrass a hard time, John says.

Spelt is used in making speciality bread and their thinking is that it may offer a premium crop that is cheap to grow and will help control blackgrass.

The key challenge that John and Paul Cherry faced when they started out was the lack of no-till advice in the UK and this is the reason why the family launched the Groundswell event.

“The one valuable source of tips over the years has been The Farming Forum, where we could ask questions and get pointers from other farmers who are direct drilling and focussing on soil health.”

It was this sharing of ideas between like-minded farmers that convinced them of the need for a no-till conference.

Assisted by Paul’s son Alex and daughter Harriet, the family launched the event in 2016.

“We hope to learn from others who are doing things a different way, and likewise, we hope farmers coming along will learn valuable tips, too.”

There are also some myths that the Cherry’s hope to dispel, such as the perception that soil gets harder over time without any cultivations.

“Many believe you need to cultivate to break it up, but in fact the opposite is true and we have seen our soils become looser.”

At the heart of the Groundswell event is the active demonstrations of many no-till drills. The event is aimed at both seasoned no-till farmers as well as those who are just thinking of starting out.

“It turns out that there is an insatiable demand for information and farmers want to learn more about managing soils,” says Alex.

So this year it has been extended to two days, with the first day dedicated to livestock in the rotation, in association with The Pasture-Fed Livestock Association. The second day will focus on the no-till drill demos.

The conference brings together speakers from around the world along with no-till farmers from across Europe.

Across both days Keith Thompson and Rick Bieber, both US farmers who have been no-till farming for 30 years, will be speaking, as will Australian soil expert Dr Christine Jones, plus many more farmers and experts. 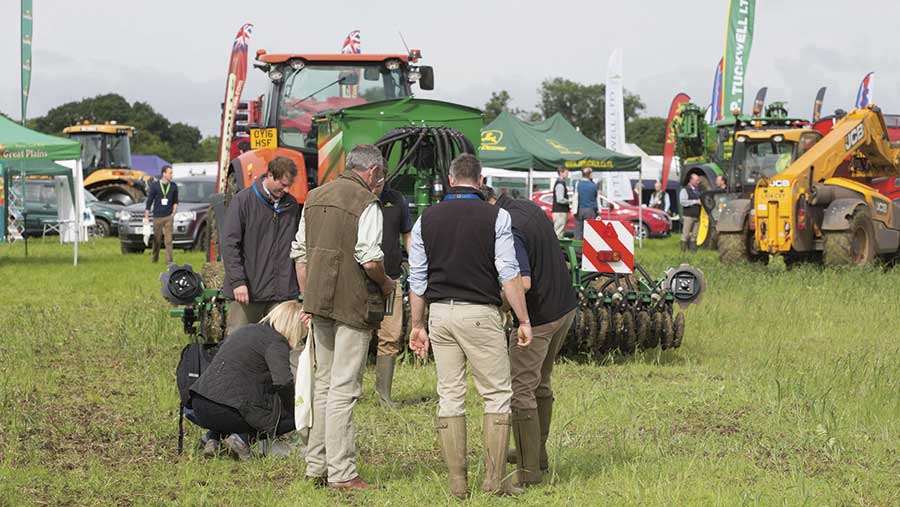 What: A two-day farming show and conference, organised by farmers. It will focus on emerging methods of soil regeneration, reducing inputs and increasing profitability.

Visit Groundswell for more information and to buy tickets.