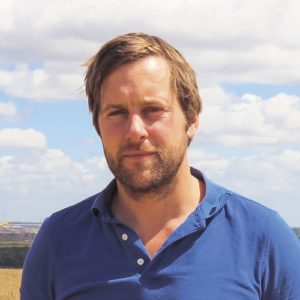 Switching to establishing oilseed rape by autocasting can cut costs without penalising yield and has the potential to reduce the threat of cabbage stem flea beetle damage by avoiding ground disturbance.

These are the preliminary conclusions from a trial conducted by Cambridgeshire grower Thomas Martin, who has been experimenting with three different establishment methods this season.

In addition to his normal disc drill, he got contractors to establish a field using placed seed and fertiliser behind a flat lift cultivator, as well as having a third field autocast the day before the previous year’s wheat crop was cut.

The results of his initial trial show that the crop established from broadcasting the seed into the wheat crop the day before last season’s harvest actually yielded higher than either of the two other methods (see results table below).

* This was a much poorer field, says Mr Martin

**This was calculated using book values and real costs

Mr Martin says that broadcasting the seed onto the surface bypasses any movement of earth and means the flea beetle isn’t attracted to the field, but it does require higher seed and fertiliser rates.

Getting crops up and away quickly is the most crucial part of the growing season for Mr Martin, particularly to combat pigeon grazing, with 2,500 birds shot across their 320ha of heavy clay land last year alone.

“Pigeons are more of a threat to us than the flea beetle, although we are on the edge of the high-risk area,” Mr Martin says of the land around the village of Haddon, which he farms in partnership with his father and mother, George and Sue.

The ultra-low cost of establishment – just £15/ha, as well as being able to cover ground more quickly, were Mr Martin’s main reasons for giving the higher-risk establishment method a try.

However, although the actual establishment cost was cheaper, there was an increased input spend on fertiliser and seed compared with establishing it using precision methods.

Autocasting requires two-thirds more seed than establishment behind the flat lift, as well as 165kg/ha of fertiliser compared with 60kg, as it was broadcast rather than placed.

This equated to an additional £40/ha spend on fertiliser alone when using Diammonium phosphate (DAP).

The seed was broadcast into his crop of wheat the day before it was cut, meaning it was then covered by the straw to prevent it being exposed to predators. Slug pellets were used to control the pests in the absence of any mechanical control.

The lack of soil movement from cultivation helped to preserve moisture in last season’s dry autumn, and Mr Martin explained that he saw significantly less flea beetle damage than in the fields that did have soil moved.

“We only saw flea beetle damage in a small portion of the autocast field – next to a joining patch of fallow which had to be cultivated,” says Mr Martin.

The rest of the field established well, with only a few lighter patches where there had been blackgrass, which he put down to greater competition, and because it would have made more of a mat on top of the rapeseed compared with straw.

He acknowledges that while a lack of cultivations helped to preserve moisture, establishing in the dry also increases the risk of complete failure, particularly as the sowing date is determined by when the previous crop is combined rather than when conditions are right.

Viewed as a safer option by many, establishing seed behind a flat lift increases the chances of the seed being placed in the right position for depth, there will be an appropriate plant population and fertiliser will be placed next to the seed.

This means that seed and fertiliser rates are much lower than with autocasting, with Mr Martin using half the seed rate he used for the autocast field, and around 30% of the fertiliser.

He also says that the method will help with drainage as the large leg helps crack the soil, but if ground conditions are dry then there is a risk that this will cause seeds to be dropped too deep into the ground to establish.

This year the crop established with this method yielded at 3.6t/ha, with Mr Martin saying that 4t/ha would be the maximum he’d expect to achieve on the heavy clay land.

It is also the costliest of the three establishment methods, taking more diesel and horsepower as it’s moving the most earth and, consequently, also takes the most time and covers significantly less hectares per hour than either the autocast method or the disc drill.

The Vaderstad 6m disc drill is the standard method of establishment for Mr Martin, with both the wheat and the oilseed rape crop established with the same machine.

Alongside quality of establishment, he says this has to feature in future decision-making as investing in a second drill is a significant additional cost to the business if the benefits are negligible.

He praises the disc drill for its excellent seed placement, saying that a slightly higher number of plants per sq m emerged than with the flat lift, but noted that there was an additional establishment cost with this method as an extra pass with the rolls is required.

Looking ahead, however, retaining this method would lower capital costs or expenditure on contractors, as this drill was also able to sow his wheat, so would remove the need for either buying another machine or letting the job out.

“I lean towards different methods on different days,” Mr Martin says, acknowledging that the results were still far from conclusive, given that it was a between-field trial, different varieties were used for each trial, and it has only been one season of results so far.

This year he is planning to repeat the experiment using the same variety across all three establishment methods to iron out one potential area where the real results are being obscured.