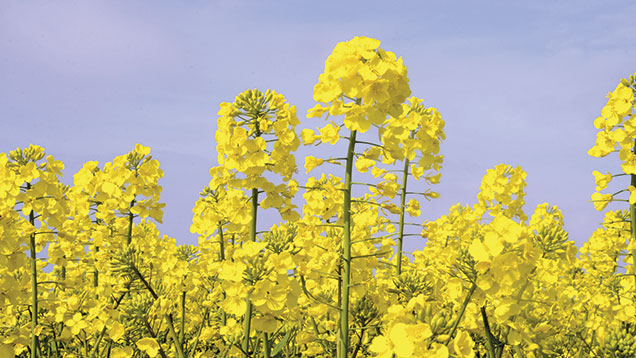 The profitability of oilseed rape is on a knife edge due to depressed rapeseed prices and ever mounting growing costs.

This is set to cause a decline in the area of the crop for the fourth year in a row this coming season despite early signs of good yields from this summer’s harvest.

With average growing costs of about £500/ha and after adding in fixed costs, growers need a yield of 3.2t/ha simply to break even at current prices.

David Jones asks four experts for their tips on maximising yields and minimising costs for the new crop, which is set to be drilled in the next few weeks.

Better tolerance to key diseases such as light leaf spot and phoma should be foremost in growers’ minds to save on fungicide costs.

Mr Leaper suggests growers should only chose varieties with a minimum score of 6 for light leaf spot and 5 for phoma on the AHDB Recommended List scoring system where 1 is low resistance and 9 is high.

Chris Rylatt, agronomist with Agrii, says in his area of Hampshire he advise growers to chose varieties of not less than a 7 for phoma as the disease is more prevalent in his region.

Richard Elsdon, technical manager at co-operative United Oilseeds, says growers need to be less dependent on fungicides for the future as some products are becoming less effective.

“We need better resistance as we no longer have the chemistry to solve problems,” he says.

Ben Coombs, commercial technical manager at Bayer CropScience, agrees there is a need for an “all-round package of good disease resistance” to make the crop pay in the future.

Mr Leaper says when adding the resistance scores of the two diseases together Exalte and Sensei come out top of the hybrids and Barbados and Elgar of the conventional varieties.

With better disease resistance it may be possible to target just one autumn fungicide spray in early November primarily against light leaf but which will also be effective against phoma.

Growers should try and spread the drilling dates of oilseed rape in high risk areas for cabbage stem flea beetles to minimise the risk of damage from this pernicious pest.

Last autumn proved to be a “perfect storm” for flea beetles with numbers four times normal levels, neonicotinoid seed treatments banned, resistance to pyrethroids building, and so 18,000ha of the national crop was lost by the end of September.

Although neonics are available in the four counties of Cambridgeshire, Bedfordshire, Suffolk and Hertfordshire this coming season, experts warn that if there are enough beetles they will damage even seed-treated crops.

“In high risk areas, I would spread the risk by spreading the drilling dates,” says Mr Leaper.

Last autumn, most damage occurred when oilseed rape was drilled at the end of August to the beginning of September, and there was less damage when seed was sown earlier or later.

Mr Elsdon suggests growers using neonics should still be prepared for damages as in the autumn of 2013 there were big flea beetle numbers, which caused failed crops even in the last year of widespread neonic use.

His message to growers is to drill early and immediately roll to conserve as much moisture in the soil.

Mr Coombs agrees that a fine seed-bed and good moisture are key to establishing a good crop which can resist flea beetle attacks, but adds “If you get enough beetles they will destroy a crop”.

Mr Leaper agrees growers should aim for fast establishment to try to get plants to a stage to resist flea beetle attacks and highlights the following points:

With profit margins under pressure and flea beetle attacks likely, there is set to be a move to a more post-emergence herbicide focus in case of crop failure.

If expensive pre-emergence weedkillers are used and the crop fails then this will be money wasted and there may be limitations on future cropping.

Mr Elsdon says there is a trend towards post-emergence treatments in case of flea beetle attacks, but warns that there are risks of not getting good early control of a range of broad-leaved weeds.

Mr Coombs agrees it could be difficult to control weeds such as cleavers, poppies, cranesbill, chickweed and mayweed with post-emergence sprays.

“It will be challenging to get a handle on these weeds using post-emergence treatments,” he says.

Mr Leaper adds in the current climate growers will be tempted to hold back on inputs until they see what sort of crop develops.

“In flea beetle hot spots there will be a wait and see attitude to what establishes before we spend anything,” he says.

Mr Leaper believes there may be an increasing place for Clearfield varieties as these are improving and fit in with a post-emergence approach, and give good broad-leaved weed control including charlock and runch.

Clearfield varieties are tolerant to post-emergence imidazolinone herbicides and so give growers the opportunity to save on a pre-emergence weed killer and wait to see whether they have a viable crop before applying a post-emergence herbicide.

“I think Clearfield has the potential to grow; let’s wait and see,” he says.

Mr Rylatt says it can be difficult to cut herbicide costs as many of his growers are using a three-spray programme of pre- and post-emergence products and then a later propyzamide treatment, and can be spending about £110/ha to get good weed control.