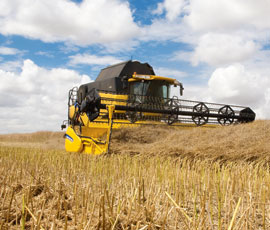 Oilseed rape yields have been somewhat disappointing this year, reverting to unexciting yields with lower oil contents than normal.

However, taken in the context of the difficult season, oilseed rape has actually done remarkably well, and most farmers’ disappointment really stems from the drop in performance following last year’s bumper crops.

According to the ADAS crop report, with harvest 95% complete as Crops went to press, yields were just above the five-year mean, at 3.4-3.6t/ha. “Where crops were affected by heavy rain and hail there was some shattering of pods and seed shed, resulting in yields dropping to 2.5t/ha,” it said. “Lodging also resulted in a slight reduction of yields, while those crops that were harvested before seed shed and remained standing yielded well at up to 5.2t/ha. Seed size is on the small side, and oil contents are lower than normal, ranging from 40-45%.”

Last year, oil contents were on the high side at 45-47%, said Richard Elsdon, technical manager at United Oilseeds. “A lot of it is down to the overcast conditions from flowering through to maturity. This year we had a very long flowering period and short maturity period; a complete contrast to last year’s conditions. As a result the seed is much smaller this year, and oil contents are lower.”

A lot of rape seed had come in wet, at over 10% moisture compared with 7-8% last year, meaning higher drying costs for farmers, said Mr Elsdon. In the main, farmers in the East and South had drier weather, and benefited from better yields. “Generally speaking, heavier soils have produced more disappointing yields, as have crops further north and west, where the majority of the rain was.”

Perhaps surprisingly, sclerotinia sprays had worked well, he added. “It’s incredibly frustrating, because farmers got everything right, and yields have been disappointing, because of the one thing we have no control over whatsoever.”

Most farm results mirrored the trials, with DK Cabernet and PR46W21 proving reliable, he added. “Where crops have gone flat it’s often been the result of better than expected autumn establishment, perhaps followed by more nitrogen applications than necessary.”

This year we had a very long flowering period and short maturity period; a complete contrast to last year’s conditions. As a result the seed is much smaller this year, and oil contents are lower.”
Richard Elsdon, United Oilseeds

PR46W21 topped the HGCA’s gross output table for both 2012 and the four-year mean, at 105-106%. The new hybrid variety PT211 also did well this year, pulling its over-year mean up to 104%. “Overall, it’s been a disappointing year for trials, with an average yield in the East and West of 4.23t/ha compared with the mean of 5.05t/ha,” said Simon Kightley, oilseeds variety specialist at NIAB TAG. “Oil contents were also lower, so gross output was down further, at 4.52t/ha compared with 5.43t/ha on average.”

Although crops had generally looked well, the cold and wet conditions during flowering meant pollination from insects was poor, so pod numbers were lower than normal, he said. Even where pods had set, the lack of sunshine resulted in small seeds, leading to reduced yields and oil contents.

“Because the hybrids are generally taller and more vegetative, we saw a lot of lodging in some of the hybrid varieties,” said Mr Kightley. However, PR46W21 had coped well, and some newer candidates were looking promising, he added. “Marathon is probably the shortest and stiffest of the lot, so that’s one I would favour. Troy – a semi-dwarf hybrid – is really quite exciting, because semi-dwarves have a huge benefit in their resistance to lodging, general management and ease of combining.”

But conventional varieties were still holding their own. “Cabernet performed below its four-year average this season, but it’s still a good solid variety. And Vision, for some reason, has suddenly come to the fore. But I don’t think we should get too carried away by this year’s results, because it has been such an unusually adverse year. There are plenty of good conventional and hybrid varieties to choose from and, as always, it’s best to look at the over-year averages when choosing what to sow for the future.”

In the North, gross outputs averaged 4.36t/ha, 0.8t/ha below the over-year mean, said Simon Oxley, Recommended List manager at HGCA. Some popular varieties had not fared as well as normal, with Compass and Cuillin proving particularly disappointing this year. Compass was now third in the list over the four-year mean, with a good year for Troy putting it top of the table with 106%.

“The clubroot and light leaf spot resistant variety Cracker has yielded lower than the four-year average, at 94%,” he said. “But it remains the best option and the variety of choice in the North for these characteristics.”