Sliding yields and extra weed pressure are just two of concerns playing on the minds of farmers considering converting to no-till drilling.

And although these problems may only present themselves during the first few years of conversion, they’re enough to prevent many fence sitters from giving it a try.

David Burden faced just this dilemma when he decided to set up a no-till contracting business from is family farm near Maidstone, Kent. 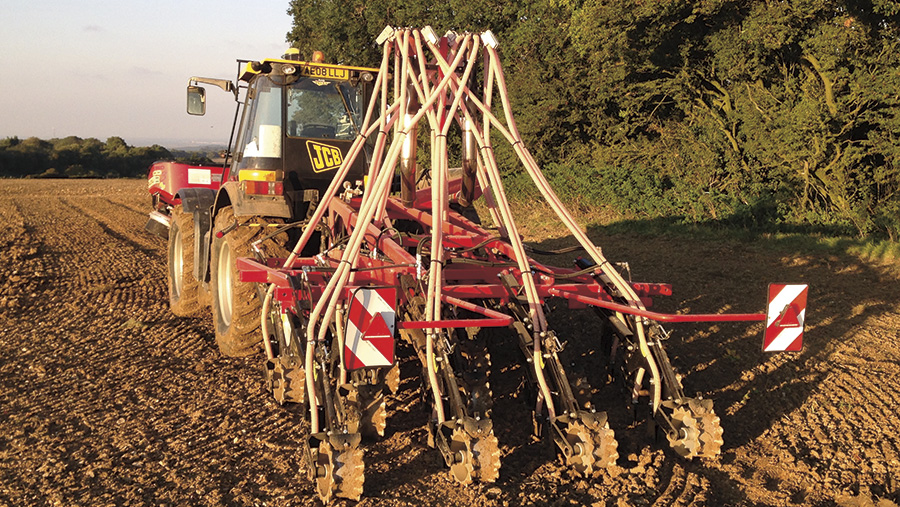 He found many people were wary of switching straight to a strict no-till system so instead came up with a more gradual approach to getting people interested.

This involved him investing in a 3m Dale Eco Drill last summer. Crops caught up with him to see how it has performed during its first season.

Why are you convinced by no-till?

I’m not actually a die-hard no-tiller. I think there are plenty of soils and conditions were some cultivation work is required, particularly in the early years.

I’d say I’m more a supporter of conservation agriculture – that means reducing cultivations as much as is possible, looking after soils better, building up organic matter and working to gradually get soils to a state where no-till will work.

I think when you do get there a no-till system is better for the long-term health of our soils.

As an added benefit it costs a lot less, too.

What made you choose the Dale Eco3?

When I set out to buy a drill I had five on my potential shopping list: Sumo’s DTS Prime West’s Cross Slot, John Deere’s 750A, Vaderstad’s Seed Hawk and the Dale Eco Drill.

With most of them the massive financial outlay was the biggest barrier.

At one point I got pretty close to borrowing £130,000 to buy the Cross Slot, but I just couldn’t make the figures stack up.

Compared with that, £28,000 for the 3m Dale Eco including split front hopper seemed a bit of a bargain.

I also liked the flexibility of the Dale and the fact it will work happily in anything from stubble and standing cover crops to ploughed and min-tilled ground – it fitted with my plan to gradually introduce no-till. 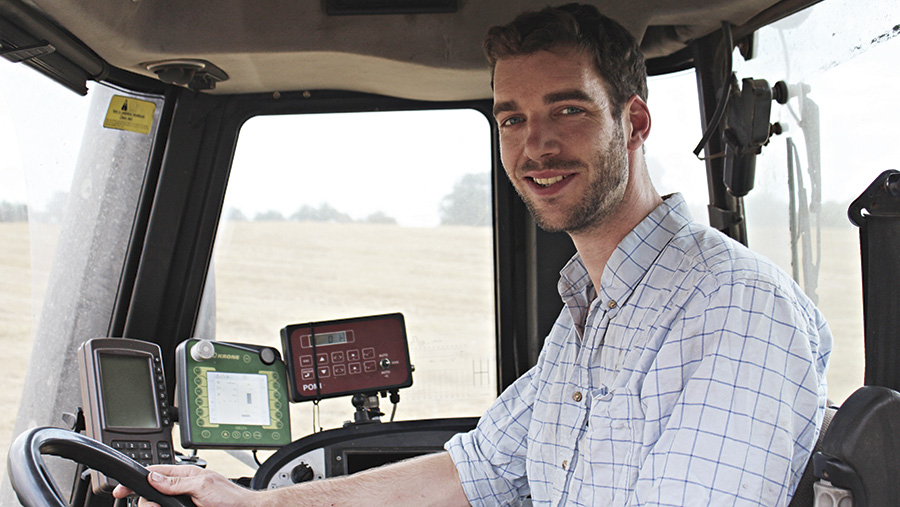 The Dale is a pretty simple tine drill and on the 3m version there are 12 coulter assemblies staggered across three rows.

Each of these has two tines that can be mounted either in-line or staggered.

When they’re set in-line the front tine can be used to apply granular fertiliser while the rear sows the seed, which is ideal for oilseed rape.

This gives you 25cm rows.

You can also sow with every other coulter to give 50cm rows.

Switching them to staggered mode gives you 24 outlets at 12.5cm spacings, which is the setup I use for cereals.

A metal press wheel then consolidates the soil after the seed has been planted. 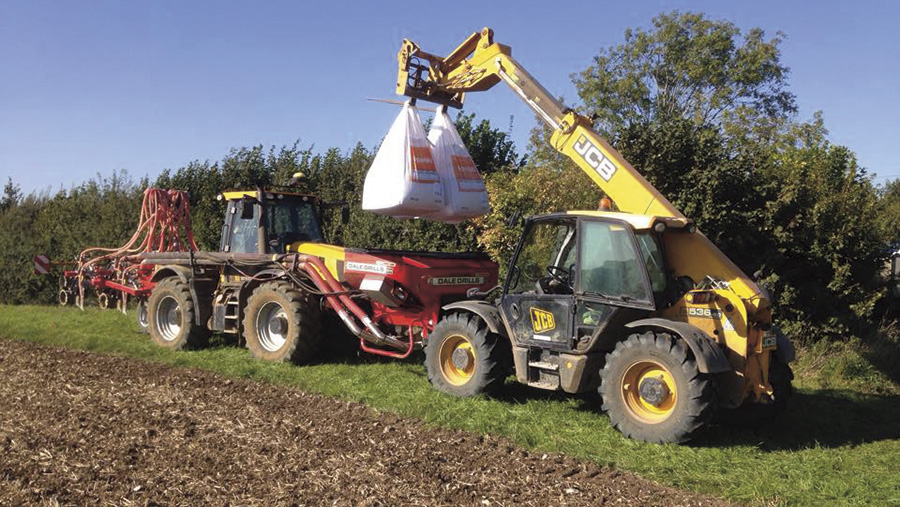 How much work have you done with it?

I got the drill last summer and picked up several small jobs from people that were interested in giving it a try.

In the end I drilled 240ha across 11 different farms. I didn’t drill any oilseed rape, but did a lot of catch/cover crops and cereals.

The most interesting was a half field of second wheat I established for a farmer as a bit of a trial.

On my half of the field we went straight in with the Dale and rolled it, while the other half was left to his standard setup.

That involved a pass with the discs and two runs through with the Sumo Trio, before planting with a Vaderstad Rapid.

He also rolled it afterwards.

Both crops established evenly and looked pretty similar throughout the growing season.

I also planted some spring beans, spring cereals and linseed with it. 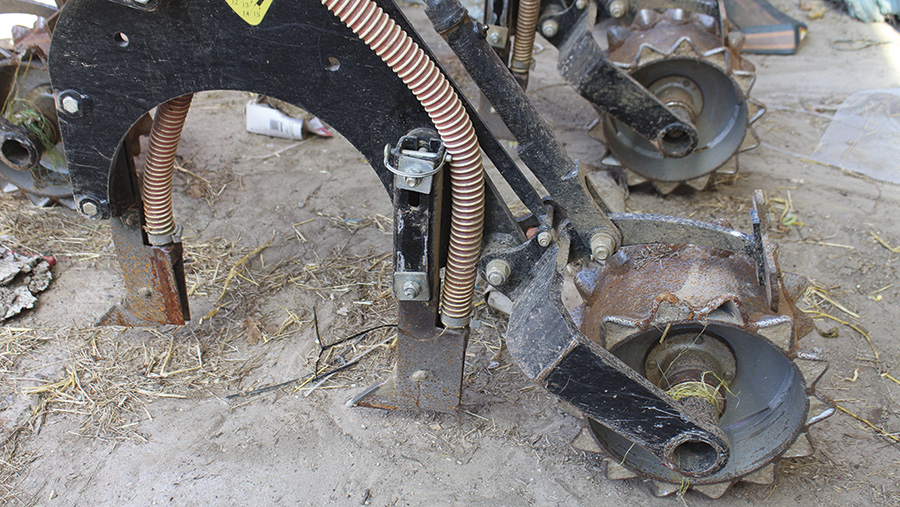 How much do you charge?

Because the Dale is a relatively cheap and simple drill that’s easy to pull I only need to charge £45/ha.

As a comparison rival contractors in the area with Sumo DTS drills come in at about £65/ha.

Has the drill performed well?

The drill hasn’t given any mechanical problems so far, but then there isn’t a lot to go wrong with it.

For me the biggest irritation has been the manual depth adjustment system.

Each coulter has to be adjusted separately, which is pretty time-consuming.

In terms of drilling performance, it isn’t the lowest disturbance drill out there.

The fact you’re dragging a tine through the ground means you are going to work up some soil and the faster you go the more soil disturbance you get.

For no-till drilling, I’ve knocked my speed down to between 8 and 10kph, which does limit soil movement. On cultivated ground I’m up about 12kph.

If I think there’s a market for true no-till in the area, I might buy a disc drill. I saw Weaving’s GD drill at the recent Groundswell No-till event in Hertfordshire and was really impressed.

What preparation work are you doing before drilling?

On most of my contract-farmed ground I’m going through with my 7.5m Mzuri Result stubble rake behind the combine.

Because this has a set of discs on the front it generates a bit more tilth than some of the simpler rakes on the market. 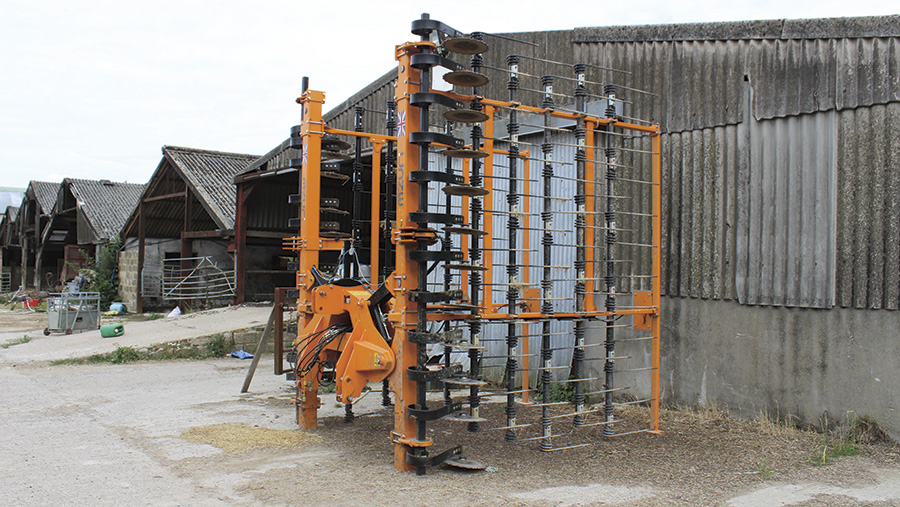 This gives a good weed seed chit, which I’ve either raked again or sprayed off before drilling.

I’ve also added a slug pelleter on the front as a cheap method of planting catch and cover crops.

Establishment isn’t always fantastic, but it’s a good way of getting my customers interested in the concept of cover crops and I don’t charge any more for it.

I’ve been encouraging them to start with really cheap mixes, plain mustard or even banging on some rape screenings out of the cleaner.

I’ve even combined old game cover and used that before. 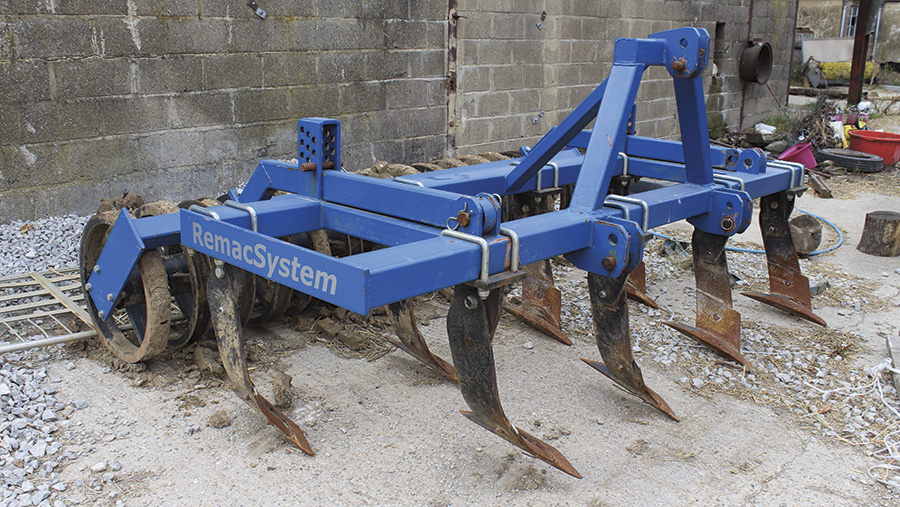 To sort out some of the more compacted ground, I’ve just invested in one of Howard Reed’s Remac soil looseners.

This has curved legs that lift a wedge of soil, which improves soil structure and lets the air in.

For other farmers, I’ve drilled into all sorts of ploughed and min-tilled conditions.

You just need to make sure that cultivated ground is well consolidated before you start.

Have weeds been a problem?

I haven’t noticed any more weed pressure in the crops we’ve established so far and the straw rake has been a brilliant tool for clearing up seed-beds.

How has it coped in different soil conditions?

The soils are real mix round here from hard clays and chalk over flint to easy-working loams.

I bought the Dale because I thought it would be a versatile drill and thankfully it’s worked well in most conditions.

The only problems I’ve had are in particularly wet conditions where it can smear slightly.

Why are you running it on a Fastrac?

There are several reasons I went for a Factrac 2155.

As I was just starting out and no-till isn’t that well established in the area, I knew I’d have quite a few small jobs and would be clocking up a lot of miles between.

I also like the fact that it’s four-wheel steer and tracks itself on the headlands, reducing soil damage.

It’s fairly light, too, with the tractor and drill coming in at about 9t.

Have you had to make any modifications to the drill?

I haven’t done anything yet, but I plan to this winter.

The front hopper is a bit too heavy relative to the drill, meaning the tractor runs at a slight angle.

One option is to beef up the front suspension and the other is to mount the hopper on the rear deck.

The benefit of mounting it on the back is that I can then put a press on the front for working into cultivated ground.

I’m also considering buying some of Dale’s disc units that bolt on in place of the front leg.

These should help cut through bulky cover crops, which can sometimes wrap round the tine coulter.

What are you planning to do next?

This autumn I’m going to do some companion cropping for a customer, putting vetch with oilseed rape.

For this I’ll leave the tines in their twin cereal-drilling mode and put the oilseed rape down one and the vetch down the other.

This new series in aims to bring you practical experiences and views of growers and contractors who have made significant changes to their arable machinery line-up.

So whether it is a complete change of establishment system or new big kit like a self-propelled sprayer or high-horsepower tractor, find out why they made the change and what benefits it delivered, warts and all.

If you want to take part in our series email Crops’ editor Richard Allison at richard.allison@rbi.co.uk.