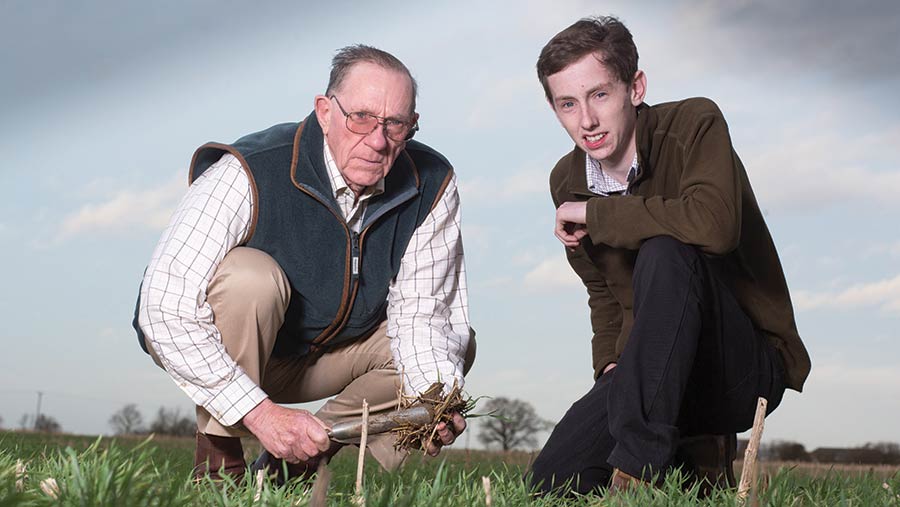 Leaving soil undisturbed is an important part of successful weed control for one no-till grower, who believes he is using less herbicide since making the change from conventional tillage.

Managing weeds has long been a challenge for no-till farmers and there is a perception that making it work involves heavy use of herbicide and/or cultural techniques like stale seed-beds.

However, Tony Reynolds, who farms 1,270ha across three farms with his grandson Sam Patrick, is proving that it can be achieved without resorting to heavy chemistry use and any cultivations. He hasn’t ploughed for 15 years and is currently using a Weaving GD series drill launched at Cereals last summer.

His high crop yields on what he refers to as “indifferent land” proves the system is benefiting from the improvements in soil. Blackgrass numbers have also fallen over the years, with no weed issues.

Oilseed rape yields have increased by 20% since adopting no-till, now averaging 5t/ha. “Yields were a little down last season, with Sesame coming a tad under 5t/ha.”

Reasons for the switch

Looking back, he recalls how his dad farmed with a horse and cultivator with no problems.

“But we were increasingly having problems getting stuck in fields with modern, heavier machinery.

“An example is Number 1 field, which is heavy clay. We once had a chap go in with a plough and come back out with only half of it. Now the field is much easier to travel on and establish crops in due to improved soil structure.”

In addition, there was the challenge of blowing peat fen and he recognised that he had to do something to stop soil loss.

So in 2003, he started with no-till with the aim of reducing erosion and encouraging rooting and hasn’t looked back.

For weed control, the first ingredient was to introduce spring cropping, currently accounting for 20% of the area.

The target rotation is first wheat, second wheat, oilseed rape and spring cropping. “At the moment oats and beans are the main spring crops.” Areas destined for spring cropping are overwintered with a direct-drilled cover crop and he uses a mix of black oats, vetch, phacelia and crimson clover. In spring, glyphosate is applied the day before drilling.

Alongside spring cropping, the biggest weapon against weeds is not disturbing the soil, as this encourages germination of weed seeds, especially blackgrass.

“About 80% of blackgrass seeds will rot in year 1, then 80% of the remainder in year 2 and so on. It, therefore, takes a long time for the seed-bank to fully deplete.” The decrease starts the year you leave the soil and numbers have drastically fallen after 15 years of no-till.

“You can create a really good seed-bed and then spray off. But then the actual process of drilling disturbs soil and you get a flush that comes up with the crop,” he says.

Instead, he sprays stubble off with glyphosate the day before drilling. Then wheat will typically receive a pre-emergence mix of diflufenican + flufenacet + pendimethalin.

One thing with direct drilling is you have to drill earlier, but with no soil disturbance, there is no problem with blackgrass flushes. This year, first wheats went in on
5 September and the aim is to finish by the end of September.

“Blackgrass used to be a problem,” says Mr Reynolds. “We have about five to six fields that no longer need any sprays, as blackgrass numbers have fallen over
the years.”

Oilseed rape is established using Autocast on the combine, into stubble left by the stripper header.

“We do not stir up the land, so there is no flush of weeds and the system works well with Kerb (propyzamide). Any remaining weeds in spring are taken out with Galera (clopyralid + picloram).

One concern is that the residue/mulch can reduce the efficacy of herbicides by preventing them reaching the soil, but this is not something Mr Reynolds has seen.

One tool being promoted in the battle against blackgrass is the plough, with trials showing a 70% reduction in blackgrass numbers in the following season.

But Mr Reynolds has real concerns with rotational ploughing.

He explains that in the top 30cm of soil, roughly the top 10cm contains aerobic microbes, the bottom 10% has anaerobic microbes and the middle part is made up of a mix with some specific species.

Ploughing results in anaerobic microbes being exposed to oxygen, aerobic microbes are buried and end up losing about 60% of the microbes. It takes about four years to recover.

He explains that the microbes, fungi and invertebrates are crucial in converting residue into soil organic carbon – vital for good soil structure.

Looking ahead, he is trialling different cover cop mixes that don’t regrow. “The theory is that we can macerate or take a crop for silage and then drill into it without the need to use glyphosate.

“Glyphosate is a precious chemical and we need to protect it by minimising its use,” he says.

No glyphosate resistance has been found in the UK to date, but experiences like those in the US prompted the Weed Resistance Action Group (Wrag) to issue new guidelines earlier this year.

The guidelines are especially important for no-till farming, as this is a higher-risk approach than inversion, says Monsanto’s Barrie Hunt. “Cultivation is a key weed management tool.”

Looking at risk, applying fewer than two applications of glyphosate pre-drilling is deemed low risk. Another is that few farmers rely just on this active, using other chemistry pre- and post-emergence.

He says growers need to maximise efficacy by using robust doses rates and getting applications right.

Mr Hunt points to research where big differences were found in Liberator (diflufenican + flufenacet) plus pendimethalin efficacy ranging from 12% through to the high 90% by changing nozzle choice, forward speed, water volume and increasing pressure.

Then monitor use to ensure there are no survivors. “A big concern in the US is repeated applications to survivors – this should be avoided.”

Glyphosate is a vital part of no-till systems, but as US growers have discovered, its overuse can lead to weed resistance problems.

Roundup Ready crops have taken a big proportion of the cropping area in the North Atlantic Free Trade Association, says Thomas Mueller (pictured), researcher at the University of Tennessee. It accounts for 90% of soya beans, 70% cotton, half of corn and all sugar beet in the US.

But after 10 years of benefits combined with no-till, he says the era has ended because of the spread of glyphosate-resistant weeds. “Now you see gangs removing weeds by hand – you would not have believed this several years ago.”

In Tennessee there is no chemical to kill conyza and extensive cultivations with discs is the only way to tackle it.

However, Prof Mueller adds that US farmers had been using the active to burn down crops for more than 20 years before the introduction of Roundup Ready and this did not lead to resistance.