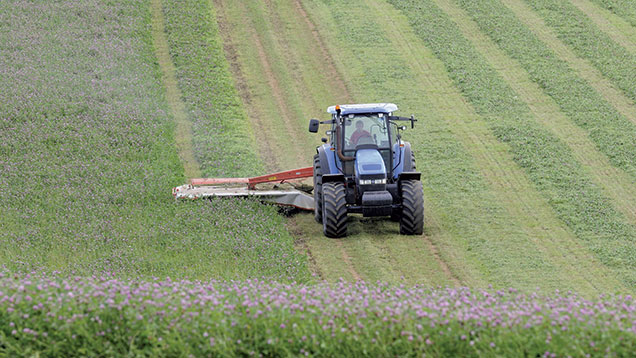 While organic cropping may not be everyone’s cup of tea, farmers struggling to chemically control annual grassweeds could learn some lessons from their environmentally friendly counterparts.

Arable farmers should “mix up” their cultural practices such as rotation and cultivations and could learn from organic systems to keep on top of problem weeds such as blackgrass.

Weed control is the number one problem for organic farmers who are unable to use herbicides, but blackgrass has never been an issue in organic rotations to the extent that it is in chemical-based cropping operations.

Stephen Briggs, who farms about 250ha of organic land near Peterborough and provides consulting services over more than 16,000ha across the country, explains a two year clover break is the key to keeping blackgrass off organic farms.

“Growers should look to mix it up and have a greater diversity of crop and of the practices used to manage them to confuse the weed.

“The less variety you have, the more chance of selecting for, or favouring the weed,” he adds.

He is also an advocate of variety in cultivation, using rotational ploughing and min-till across his farm, which grows winter wheat, spring wheat, spring barley, vegetables and clover leys.

All contributors were speaking at the recent 51st Annual British Crop Production Council (BCPC) weed review, where weed experts gather to share the latest knowledge and innovations for controlling weeds in agriculture and horticulture.

Stale seed-beds are crucial and drilling with high seed rates – to increase crop competition – is usually delayed until at least mid-October for winter cereals and later for beans.

Cereals are drilled on wider rows an inter-row hoe can be used, replacing chemicals with a lump of steel and organic growers are also including green manures and undersowing to put something desirable on the soil surface instead of allowing weeds to take over.

“The focus should be on the seed bank and not the weed and there is certainly an opportunity to incorporate some of these practices into conventional systems,” adds Mr Briggs.

On a conventional farm, fellow Cambridgeshire grower Ed Banks inherited an “epidemic” blackgrass problem when he took over the family farm in 2007 and he believes that he has reduced the problem by 50% since then.

“Atlantis failed to resistance in 2010, so I’ve never really had a post-emergence herbicide to use in our winter wheat.

“I aimed to bringing in some variety to the rotation, as carrying on with the winter wheat, winter wheat, oilseed rape rotation was only going to make things worse.”

The farm addressed drainage to ensure the blackgrass wasn’t handed ideal conditions to thrive and also noticed that the weed tended to be worse in second wheats that were established after the plough.

Mr Banks now uses minimum tillage to establish all crops and spring crops now make up a sizeable chunk of the farms rotation, with sugar beet and spring barley the preferred options.

He has also been a pioneer in using a “chemical hoe” or band spraying to control blackgrass in his oilseed rape, applying broad-spectrum herbicide in between wider rows to kill weeds and graminicides on the row to hit blackgrass germinating with the seed.

This has considerably reduced his herbicide costs and improved blackgrass control in a break crop where it was becoming much more difficult to achieve good results.

“You must be brave and get some spring crops in the rotation and be prepared to use glyphosate to kill off crops where good control hasn’t been achieved to prevent seed return,” explains Mr Banks.

He also urges growers to use the plough wisely in the rotation to ensure that its maximum effect is achieved when trying to bury blackgrass seed.

“The spring crop has to be competitive and also the chemical options in the crop need to be considered, as some have very limited options against grassweeds.”

Niab Tag trials at its national blackgrass centre have shown that if a plough is going to be used in the rotation, it should be used to establish the spring crop rather than autumn-sown one.

“Ploughing can provide a 60% reduction in blackgrass in its first year, but in the second it’s reduced to 40%, so if you are using it in the wrong place it can reduce its effectiveness.

“We have also seen in our trials that using double spring cropping – or two years in a row – also gives a more durable reduction in the weed population,” Mr Cussans said.