With oilseed rape crops taking advantage of the much-needed May sunshine, our four growers taking part in our OSR Masters series are keeping a close eye on crop progress as they start to make plans for next season.

In the second article of this series, yield performance and cost control are vying for our growers’  attention as they look for ways to improve their crops’ prospects and guarantee success.

Over the next few months, we will be following their progress into the next cropping year to see how their new oilseed rape crops establish. 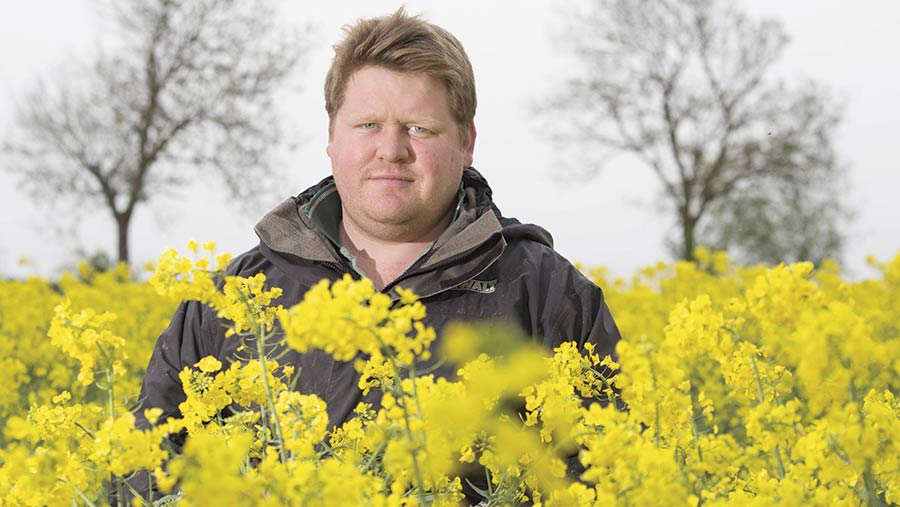 Having built his own piece of kit last year to establish oilseed rape in just one pass, farm manager Sam Paske intends to refine it for this coming summer.

Getting team member Andy Harris to fit a Techneat Terracast seeder on to the back of a Horsch Tiger cultivator in the workshop has allowed him to replace a previous disc and Sumo system, reducing the time and costs of establishing 135ha of oilseed rape.

Given blackgrass pressure on the farm’s heavy clay soils, he opted for a very narrow tine on the cultivator last year, so that OSR could benefit from drainage and root development, while soil disturbance and grassweed germination were limited.

“It worked well in good soil conditions, but we will be modifying it. The plan is to make it a bit more weather-proof, so that it can operate in wetter conditions, if necessary, and give greater seed placement accuracy,” he says.

See also: 4 growers on how they get oilseed rape off to the best start

Mr Paske has also cut the early costs of growing oilseed rape by using home-saved seed and has set his sights on bringing herbicide costs down as he works with Frontier agronomist Ed Schofield.

“The aim is to trim costs without compromising yield. We are growing conventional varieties so that only a proportion of our seed has to be bought in, and we are using benchmarking to compare our costs with others’ and look for ways of reducing them,” he adds.

Drilling starts in mid-August, at a seed rate of 5kg/ha along with broadcast slug pellets. Most of the straw is baled ahead of rapeseed drilling, helping to keep slug numbers down, and he plans to roll the crop twice to retain soil moisture.

With one of his farms bordering Grafham Water, and the other four all in the River Kym catchment, a water-sensitive area, Mr Paske works with Anglian Water when it comes to slug pellet use and relies on ferric phosphate-based pellets when required.

“The Techneat seeder has a split hopper, so it’s a straightforward operation to apply them at drilling,” he says.

Flea beetle is the main establishment issue, with two autumn insecticides being needed in 2017. Applying some more fertiliser at drilling might help the crop to get away faster, so he intends to look at how that can be done.

A total of 250kg/ha of nitrogen is applied to oilseed rape, with 30kg/ha being applied in the autumn as diammonium phosphate (DAP) and the remainder in the spring. 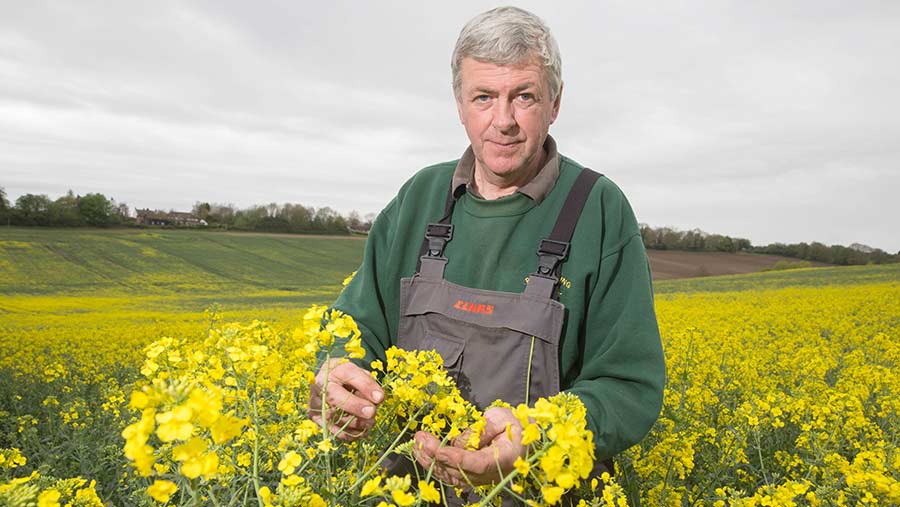 He uses a Mzuri strip-till drill to establish the crop in wide rows, as the one-man, one-pass system has allowed him to slash the crop’s establishment costs by moving less soil, as well as reducing his reliance on agrochemicals.

“At an average of 3.8t/ha, our yields aren’t as good as I would like them to be yet, but there has been progress and our variable costs have come down,” he says.

Drilling starts at the beginning of August, with conventionals going in at a 5kg/ha, helped by DAP fertiliser placed under the seed. Slug pellets go down the same day if thresholds have been reached, so the crop can exploit warm temperatures and get going within two days.

“With oilseed rape, it’s all in the establishment. In good conditions, we find that conventional varieties do very well,” Mr Woods adds.

As August progresses, he switches to hybrids for their autumn vigour advantage and adopts a lower 2.6kg/ha seed rate, putting 4kg/ha of berseem clover over the back of the drill, which costs £2.40/kg.

This companion crop is used to assist rooting, reduce weed germination and provide a distraction for flea beetle – with pigeons being deterred by the lack of landing sites between the rows.

His agronomist, Damian McAuley of Indigro, explains that adding the berseem clover is cheap and doesn’t require any additional management – making it a no-brainer.

“Oilseed rape rooting does seem to benefit from the companion crop. We have also seen some direct feeding damage from flea beetle on it, so it does seem to dilute flea beetle activity,” he says.

Variable seed rates are used by Mr Woods, so that seed numbers are matched to the expected establishment rate of different soil zones.

“On our colder, heavier north-facing slopes, we get 65% establishment, but down in the valleys it goes up to 95%. We aim to get 30 plants/sq m established in the autumn, so altering seed rates on the move helps us to achieve that and gives a more even establishment,” he says.

Pre-emergence herbicides are not required, as broad-leaved weed numbers have fallen since strip tillage was adopted. A single autumn spray of AstroKerb (propyzamide + aminopyralid) takes out both broad-leaved and grass weeds, as well as dealing with the berseem clover. 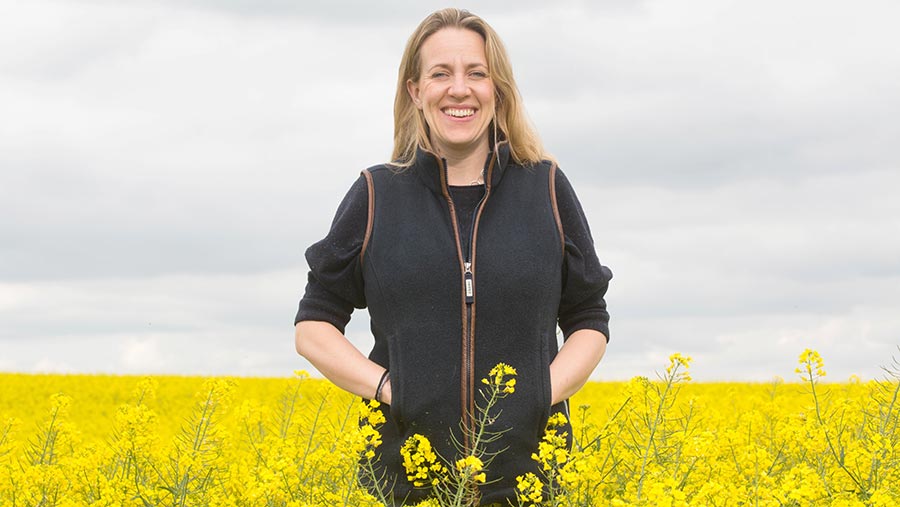 In a bid to raise yields, hybrid varieties account for all the 105ha of OSR grown by Whizz Middleton regardless of the end market.

Operating across four farm sites from the home farm base at Lilley, near Luton, Mrs Middleton and her father Brian opted for the variety PT256 for the fields destined for her cold-pressed rapeseed oil, and Clearfield varieties for the rest.

Having seen yields stagnate, they were hopeful that the better autumn vigour offered by hybrids would help crops to get away faster and overcome establishment challenges.

Another consideration was herbicide use, with the suspicion that the sulfonylureas formerly used in the rotation were delaying the emergence of OSR.

Working with agronomist Chris Bumford of ProCam, they grew a trial area of Clearfield last year, which performed very well and produced the farm’s highest yield. That gave them the confidence to switch to the Clearfield varieties Impressario and Illustrious.

“We’ll wait to see how they perform at harvest. It would be good to see some yield progression,” says Mrs Middleton.

Early threats to the crop are flea beetles, slugs, pigeons and very dry conditions at drilling, so as a result the aim is to get the OSR direct drilled in the first week of August with a Horsch Sprinter drill.

“We will stop the combine for the day to get the oilseed rape in. To avoid soil moisture loss, we don’t do a stubble scratch or any soil movement first and we direct drill across the tramlines at a depth of 11-20mm, using the recommended seed rate,” she says.

The field is then rolled and slug pellets applied. Flea beetle numbers saw an alarming rise in 2014, so post-emergence spraying with pyrethroids has become necessary. Adjuvants have proved helpful, so work with these is ongoing.

A flexible approach to the crop’s agronomy is followed. Clearfield varieties wait until the end of September to receive their first herbicide of Cleravo (imazamox + quinmerac), while the PT256 had an early post-emergence metazachlor spray.

Otherwise, both received Centurion Max (clethodim) for blackgrass control, along with an early application of 30kg/ha of liquid nitrogen and Universal Bio. In total, crops will receive 230-240kg/ha of nitrogen and 40-45kg/ha of sulphur.

The better disease resistance of newer varieties is being exploited, as light leaf spot is becoming more prevalent on the farm. 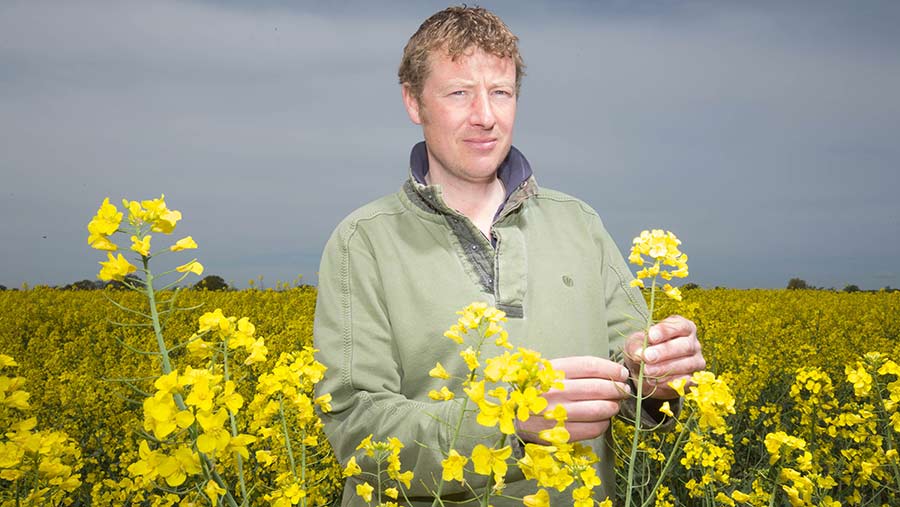 Oilseed rape must be competitive to keep its place on David Lord’s farm, so he has not been afraid to make changes to the way it is established and grown.

His ultra-low disturbance establishment system based on CrossSlot technology has reduced costs and maintained yields, with variety choice allowing the business to add value to the crop through specialist end-use premiums.

Direct drilling is now being carried out across most of the land, so cover and companion crops are being used to help with soil structure and nutrient recycling. In addition, crop residues are being chopped and retained to prevent the loss of soil moisture and limit weed germination.

That’s quite a departure from the previous min-till system which worked the top 50-100mm of soil, creating the right conditions for blackgrass to germinate. As a result, one third of the 600ha farm is now down to spring crops – with oilseed rape following spring oats.

“Our soils were in good shape before we introduced direct drilling, as they had benefited from FYM over the years. It means crop rooting hasn’t been compromised by lack of cultivation, although we are very careful at harvest to minimise trafficking and compaction,” he says.

This year, he is growing high erucic acid rapeseed (HEAR) variety Palmedor for the first time, to add an extra £35/t to the crop, as well as a small area of Exclaim.

“Try as we might, our average yields are reluctant to get over 4t/ha. We are hoping that the HEAR premium will make up for that – if oilseed rape yields dip below 3.5t/ha, it’s not worth growing,” he says.

The farm moved to hybrids a few years ago from Clearfield varieties, as once direct drilling was introduced, the lack of soil disturbance reduced weed germination, making the Clearfield concept less relevant.

A companion crop of berseem clover, which goes on with the oilseed rape as it is rolled, has become standard practice and adds just £2.50/ha to growing costs, and helps to deter early pigeon damage.

“It’s there to help with soil structure, but it also reduces the need for pest control. We haven’t had to use any insecticide for the last two years,” he adds.

Drilling starts when soil moisture is right, which may be mid-late August or early September, and he says an ideal date is about 20 August. An even spread of chopped straw from the combine is a big help in retaining soil moisture, so he often uses a straw rake as well.

Pre-emergence herbicides are not required, with just one post-emergence application of AstroKerb or Dow Shield (clopyralid) needed to take out any weeds and the clover.

Making good decisions that protect farm businesses from risk is now every bit as important as driving up output or improving efficiency.

Corteva Agriscience’s product pipeline has been developed to help farmers be more successful in what they do and Arylex Active in oilseed rape facilitates a revolutionary approach.

It allows growers to see a crop emerge before spending any money on controlling the weeds within it. No more high-risk front loading of crop protection products, an end to spray and pray.

The farmers who will be successful in the future are the ones who can see a new way forward, and we’re looking forward to seeing how this project evolves throughout the course of the year.