Early drilling into a good seed-bed with adequate moisture is the key to growing oilseed rape successfully, allowing seeds to germinate and establish quickly.

This will allow crops to outgrow potential damage from pests such as slugs, pigeons and cabbage stem flea beetles, and to generate good biomass above and below ground before winter.

Mid- to late-August is seen as optimum for sowing rapeseed in many regions and, given reasonable moisture, should help crops establish before the main migration of adult flea beetles, which occurs in early to mid-September. 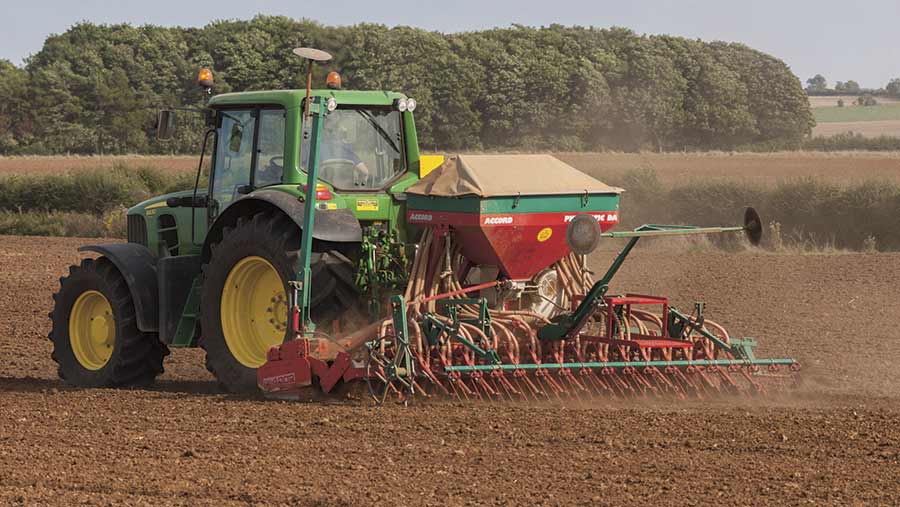 Busy workloads and unreliable rainfall can make it hard to achieve ideal seed-beds and experts advise against self-imposed drilling deadlines, urging growers to be patient and not force crops into very dry or cloddy seed-beds.

“Whatever establishment method you use, be flexible and drill when conditions are right,” says Essex-based Prime Agriculture agronomist Andrew Blazey.

“Whether you are seeding after primary cultivations or direct into stubbles, you need fine, moist, well-consolidated soil around the seed,” he adds.

Large amounts of soil disturbance and cloddy seedbeds create ideal conditions for pests to hide and thrive, so must be avoided. Rolling after drilling further reduces these hiding places and improves seed-to-soil contact. 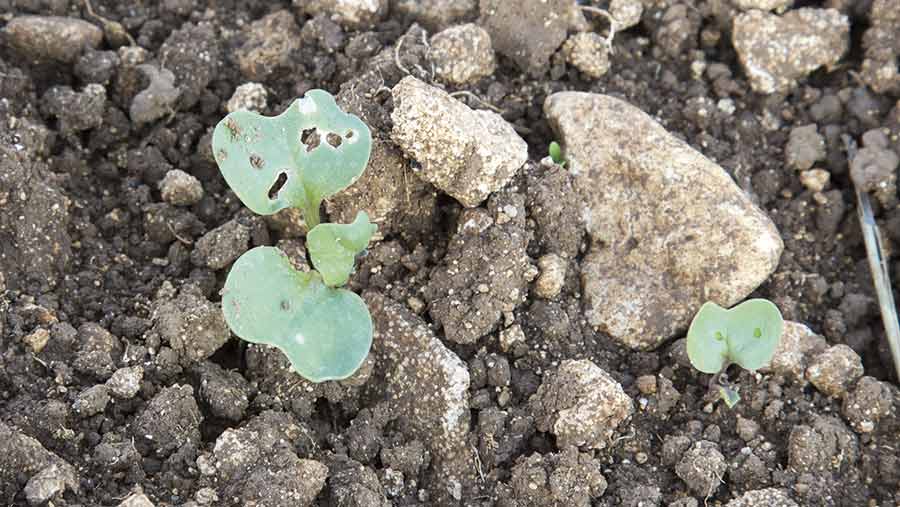 There may be scope to delay drilling until after the main flea beetle migration period, says Steve Ellis from crop consultants Adas. However, this needs to be balanced with the risk of not establishing a strong enough crop to get through winter.

This issue is especially acute on heavy ground or in wooded areas where pigeons are a major problem, making drilling beyond early September unfeasible for many, notes Mr Blazey.

There is some debate as to whether varieties offer tangible differences in autumn vigour, but it is a factor to consider when deciding what to grow.

Breeders insist many hybrids and some conventional varieties do have faster growth in both autumn and spring, although this may not always be reflected by AHDB Recommended List trials.

“There are varietal differences in early vigour, but it’s very hard to define. Hybridisation has provided a large number of opportunities and different traits, so you’ve got to choose what works best on an individual field basis,” says Andy Stainthorpe of plant breeders Pioneer.

“There are some fast- and slow-developing hybrids and conventional varieties available, with seed size often having a bigger impact on early vigour,” he says.

Varieties with slower autumn growth habits such as Sparrow, Alize, Butterfly and PT256 are more suited to very early sowing or higher fertility sites, whereas faster-developing types such as many Monsanto varieties and others such as Nikita, Architect and InVigor 1035 may be more suited to later sowing.

“Pick your variety according to the drilling window, soil conditions, fertility and disease risk. The last thing you want is for early-sown crops to get too proud and elongated in autumn because this can weaken stems in spring,” he adds.

This can be exacerbated by tight rotations. Verticillium is another disease to be wary of on tight rotations (one year in four or less), with risk increased by early sowing, says Mr Blazey.

Simon Kightley at crop consultants Niab believes autumn vigour differs very little between varieties, although he says there can be noticeable differences in spring vigour, which helps crops recover from winter damage.

He highlights the trend of growers sowing cheaper conventional seed at a higher seed rate to offset pest losses and minimise the financial risk in the event of crop failure.

Suffolk agronomist Alan Dewar says increasing seed rates may help mitigate flea beetle damage, although there is no scientific evidence to support this.

“It’s reasonable to assume that having more plants means fewer beetles and less damage per plant compared with sowing at lower seed rates,” he adds

Growers must be prepared to switch to an alternative break crop if conditions are not suitable for rapid establishment within the drilling window, especially in flea beetle hotspot areas in the southeast of England, says Dr Dewar.

“The most vulnerable time for oilseed rape is from cotyledon stage to first leaf, so anything that gives crops a boost and shortens that gap increases the chances of staying ahead of pest threats,” adds Mr Blazey.

Dr Dewar is more cautious about the benefits of starter fertilisers. “In principle they should work, but if conditions are very dry you won’t get the uptake anyway.”

While some growers are reluctant to spend money on pre-emergence herbicides until they are sure oilseed rape has established, experts say this is a risky strategy that may compromise crop establishment if weed competition is high. 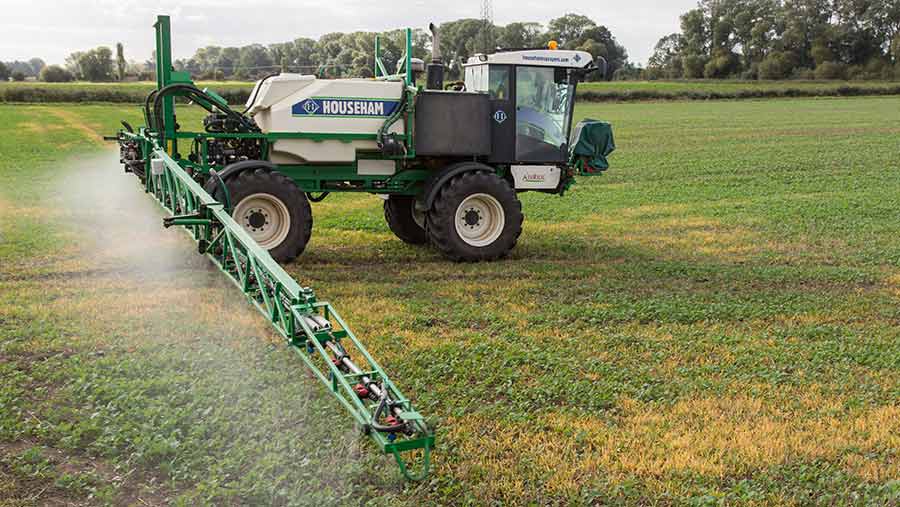 “If fields are clean then you may be able to gamble and not use a pre-em, but if there’s a lot of charlock or hedge mustard for example, it is worth applying clomazone-based pre-em or consider growing a Clearfield variety,” says Mr Blazey.

As well as allowing a wider window for weed control post-emergence, they can help mitigate any impact on oilseed rape establishment of sulfonylurea residues from a preceding cereal crop.

Once established and beyond the three to four leaf stage, Dr Ellis says oilseed rape is a very resilient crop with an impressive ability to compensate for pest damage, so growers should not be hasty in writing crops off.

“Establishment is key for oilseed rape, but once it is above ground it is generally quite robust with an inherent tolerance to loss of green leaf area,” he says.

It is already used to detect septoria and rusts in wheat, and will be trialled for real-time forecasting light leaf spot, phoma and sclerotinia from this autumn, says Judith Turner at Fera.

Although the project is still at an early stage, she hopes better detection and prediction of key pests and diseases will help improve product selection, timing and efficacy of control options.