Some have opted for earlier sowing to give the crop the best chance and those who catch the pest fast with insecticides might just have a chance to rescue the crop before the damage is done, but this isn’t always possible.

For those crops that have survived the initial onslaught from adult flea beetles, some have then suffered a flush of larval infestations in the new year. 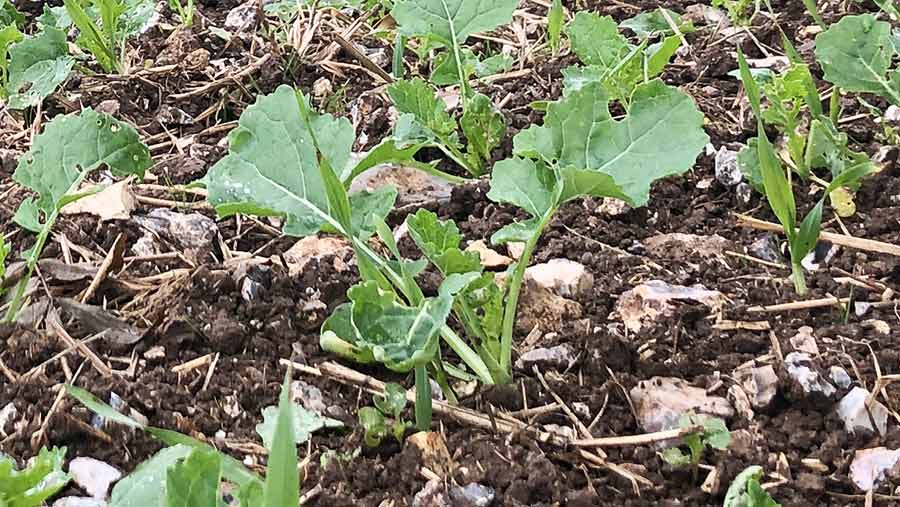 Options may appear limited, but alternatives are being explored and some have shown promise.

Niab Tag has been running trials to determine if companion cropping oilseed rape can make a difference to flea beetle infestations.

“The only half-decent candidate is white mustard,” explains Simon Kightley, oilseed specialist at Niab Tag. Having previously had striking results with the crop in 2016, Niab has continued trialling it.

“We have run into problems with killing off the companion crops,” says Mr Kightley.

Growers can’t always rely on winter kill to eliminate them, so they have to apply herbicides at the appropriate time.

“With white mustard, it is clear from the work we have done that it can quickly become competitive, which could result in a yield depression of the oilseed rape.”

The model Niab is presently working on involves using a Clearfield variety and applying Cleranda (imazamox + metazachlor) and Cleravo (imazamox + quinmerac) to take the white mustard out fairly early in the season.

This application is made as soon as the oilseed rape plants are big enough to be away from the flea beetle and grow without the competition.

“There is always concern about late weed flushes, so growers want to hold back the Astrokerb (aminopyralid + propyzamide) option until later in the autumn.”

According to Mr Kightley, there should be two objectives when tackling flea beetle. “One is to get the oilseed rape in the ground and established. The second is to minimise larval numbers.”

When addressing the issues suffered last year, he points out that it is impossible to say if a particular type of cultivation has had better or worse luck than others because the soil moisture factor was so strong.

“In the drier parts of the country, it didn’t matter what cultivations they had done,” he explains.

The question this throws up, is do growers go for hybrids because they generally have better early vigour, or short and stiff conventionals whereby they can probably afford to put more seed in the ground.

“But it’s pretty clear that growers don’t want to invest a lot in seed when there’s only a chance of getting a crop. Those in marginal situations need to ask whether more money on more vigour would have given them a crop,” he adds.

Mr Kightley says that in the end the most convincing story from Niab surveys is that early sowing produces better results. “The later the crop is sown in the season, the chances of getting a crop decrease.”

So what have growers been trying and how have they worked out? Here we look at two growers experiences.

Josh Stratton, business manager at East Farm, Warminster, and his farm manager, Tom Hallett, have anecdotal evidence that using digestate can limit and minimise flea beetle interest in oilseed rape crops, and now some of their neighbours are getting on board.

Now in the fifth year of using digestate, it was in the 2018/19 growing season when they both started to notice how clean their fields were compared with reports from their neighbours.

Though attacks of flea beetle can be isolated and localised, for the second year running, the crop has stayed incredibly clear, whereas last year neighbours lost anywhere from 10% to 100% of their crop, while a number had the delayed effect of larvae in the stalks.

“We did see a lot of flea beetle on the ground after harvest and an army marching out the grain store, but we didn’t have any damage to the crop,” says Mr Stratton.

Producing around 75,000t of PAS110 compliant digestate fertiliser, most is spread on the farm’s arable land. It provides nitrogen, phosphate, potash and sulphur for the crops and a dose of trace elements and organic matter.

Using a network of storage lagoons across the farm, the digestate can be applied to crops at exactly the right time.

Two different appliances are used to apply the digestate. Most is applied using an umbilical pipe system, with a pump at the lagoon end and a 27m Vogelsang applicator boom on a John Deere tractor.

The outlying fields, headlands, and odd-shaped field edges are spread using a HiSpec 14 cube tanker with a 12m Vogelsang boom.

Digestate is applied directly to stubbles behind harvesting winter or spring barley, before the oilseed rape is drilled with a seeder on a Vaderstad TopDown to provide light cultivations as oilseed rape is only grown one year in seven.

Application rates vary as each field is tested, but on average the aim is for 25-30kg N/ha, which usually equates to 10cu m/ha of digestate.

This year the farm is growing 230ha of Campus, Elgar, Aardvark and Acacia, which were drilled from 10-23 August.

High vigour
“We went for high vigour this year,” explains Mr Stratton. The fields are then rolled with a heavy Dal-bo water roller.

So how is the digestating helping tackle flea beetle? “Neonicotinoids were the answer in the past as they gave you a vital week to get the crop up and away,” he says.

Though there was some damage last year, he says it was controllable. “The digestate just provided the crop with those four to five days – which the dressing used to provide – to grow up from the vulnerable stage, get one true leaf and be able to cope.”

The rule on the farm is that every field of oilseed rape should be walked every two days to check for infestations, and if flea beetle is present they will use insecticides to stamp out any pests before the population swells.

“The digestate really helps to get the oilseed rape through that nasty phase where everything wants to eat and kill it,” explains Mr Hallett.

The feeling is that the crop gets an extra boost to get the root growing – this on top of work done on the farm to improve soil quality.

Mr Stratton’s agronomist has also noticed that other clients who use pig slurry and farmyard manure have noticed fewer flea beetle issues.

“Though it’s anecdotal, our neighbours are now using our digestate and we still haven’t lost anything to flea beetle.”

Edward Parsons has been cutting back his oilseed rape cropping area for a few years, even before flea beetle became a problem, due to the expense of growing it. “The money you spend on it is huge,” says Mr Parsons. 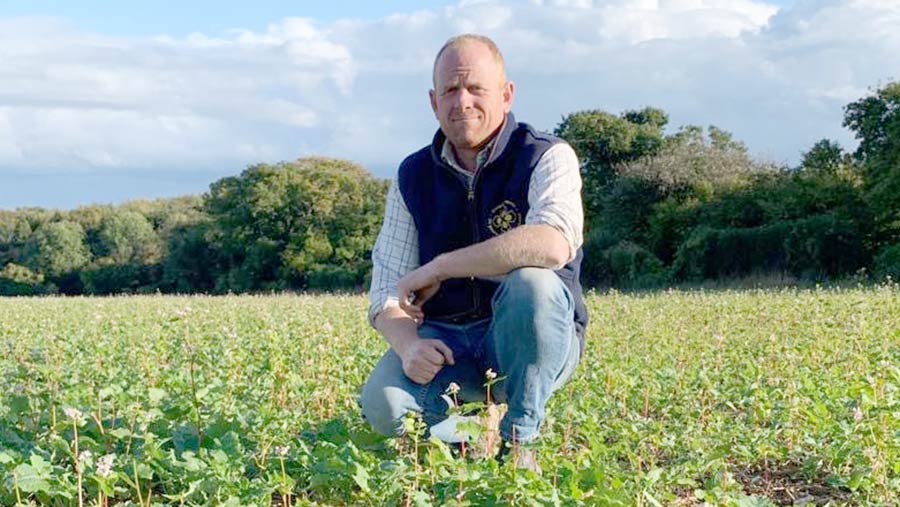 After having a frustrating harvest this year, he isn’t growing a lot of oilseed rape on his own farm now – just 38ha – whereas he had around 121ha five years ago.

With yields averaging 2.6t/ha after a big flea beetle problem last autumn and a larvae issue in the spring, he has decided to implement a few changes this season – although the crop’s future on his farm hangs in the balance.

Growing Campus, he has stuck with the conventional variety and hiked the seed rate up from 60 seeds/sq m to 80 seeds/sq m, has introduced companion cropping with buckwheat and left the volunteers in the field as long as he could.

The buckwheat was drilled on 20 August – five days before the oilseed rape – using a Vaderstad TopDown BioDrill and Mr Parsons did have to stubble rake the spring barley chit.

“I have heard that buckwheat helps with the flea beetle, but it’s all speculation. Basically they don’t like it blowing around and don’t like the physical colour.”

He planted the buckwheat at 8kg/ha, costing around £10/ha. “You don’t want it too thick or it will blanket out the oilseed rape. The buckwheat will die at 3C or below as it doesn’t like adverse weather.

They haven’t eaten any of the buckwheat, but I’m still on the fence – it’s going to take a year or more to see if it works.”

The oilseed rape was direct drilled into the buckwheat using a Vaderstad Rapid, and 5t/ha of chicken muck was spread on the seed-bed.

“I haven’t invested too much, so there was no pre-emergence, but it has been rolled and had insecticide.”

In addition to the buckwheat, Mr Parsons avoided killing off his barley volunteers for three weeks.

“Flea beetle doesn’t like it if there’s lots of other crops there, but you can’t leave the volunteers too long or they smother the rape. I left it as long as I dared.”

Despite all of his tactics, he has still seen a lot of damage to his crop. “But I have kept the crop and it’s pulled away. The next step is to control the larvae, which means topping the crop or sheep grazing,” he says.

“You would be brave to top it as this wants to be done just before stem extension. But I have topped a strip trial before, and it was fantastic.”

For Mr Parsons it’s been a combination of factors to reach this point, from the loss of neonicotinoids, to the increasing resistance to pyrethroids. “If this crop fails, it’s the end of me growing oilseed rape.”