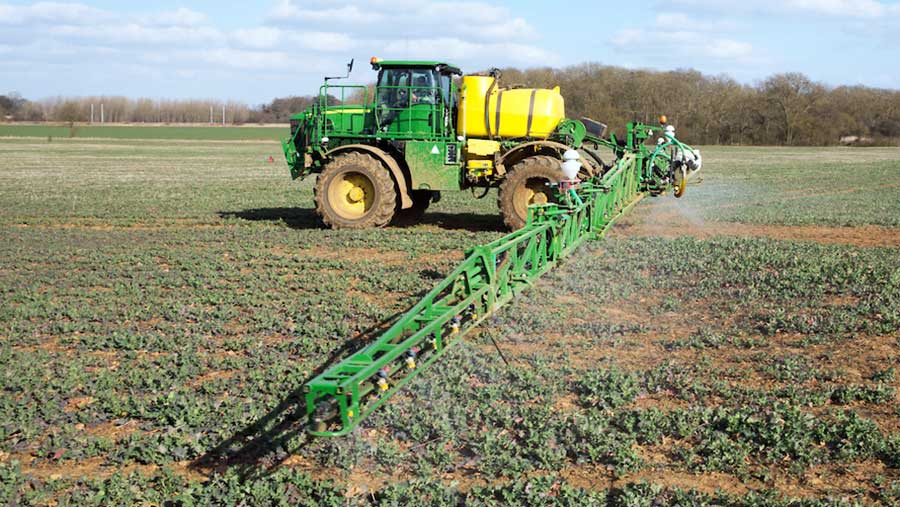 A candidate oilseed rape variety with ideal characteristics to help manage some of the crop’s most damaging threats is being tipped for success by the seed trade this autumn.

The national rapeseed area has been in steady decline since its high of 737,000ha in 2011-12, with the AHDB’s most recent autumn Early Bird Survey estimating a 13-year low of just above 550,000ha this harvest year.

Several factors are at play, but primarily the shrinkage is down to lower prices and increasing agronomic threats such as light leaf spot and cabbage stem flea beetle making the risk versus reward ratio unattractive for some.

Despite this, oilseed rape remains a key break crop and where it holds its place in drilling plans, growers are turning to variety choice to help manage the risks associated with the crop.

For this reason, it is good news that new conventional variety Butterfly from breeder KWS will be widely available this autumn – through distributors Agrii and Openfield – offering a strong agronomic package that can help manage the crop’s two most important diseases.

Suitable for growers UK-wide, it has a resistance score of seven for light leaf spot, supported by a strong seven for phoma stem canker. The AHDB Recommended Lists have a scale from one, meaning disease resistance is very poor, up to nine, which indicates strong resistance.

Once considered a Scottish disease, it is now a headache across the UK and fungicides are also becoming less effective in controlling it, so unless sprays are frequent and perfectly timed, control can be tricky.

“The problem is we can’t always run on the fields when we want to, so you need the genetics for that little bit of back up and insurance,” he explains.

KWS carried out their own trials to test the value of resistance to light leaf spot, pitting a variety with a score of seven against a four under a number of sub-optimal spray regimes (see chart).

The company’s oilseed rape breeder, Carl Gibbard, says the variety with a rating of four suffered a much sharper drop in yield where significant gaps between fungicide application were seen through the key winter and spring period.

“It highlights the importance of having strong disease ratings, as it protects yield and gives you more flexibility in your fungicide programmes,” he adds.

Adopting varieties not yet on the Recommended List would be based on a more limited dataset than those fully recommended and some would argue it is a “leap of faith”.

However, Mr Gibbard says Butterfly was proven to be the second highest yielding variety in France – where it was bred by KWS subsidiary Momont – in 2013.

While the high yield was not seen in UK-first trials during the same year, its strength against light leaf spot and stem canker, plus the output potential seen in France, ensured KWS took it forward for National List testing.

Later in 2015 and 2016 it scored 107% and 106% of controls for gross output respectively, across four fully replicated trials around the country and received National List status this spring, so could gain full recommendation for 2018-19.

Mr Barker says that Agrii have backed Butterfly for several reasons beyond its light leaf spot rating, including its steady development that lends it to an early drilling slot.

This means it can be drilled in early August without the risk of becoming too forward before winter and could attract interest in areas ravaged by flea beetle, where getting a crop well established before the pest’s peak adult activity in September is critical.

Butterfly is also a conventional variety, so associated seed costs will be lower than hybrids, reducing the financial investment where there may be a risk of losing the crop.

Mr Barker adds there will be about 100t of seed available for 2017 drillings, enough for about 20,000ha and a considerable share of the market.

*Based on KWS trials

The University of Hertfordshire is working closely with industry partners such as plant breeder KWS to seek out durable genetic resistance to key oilseed rape diseases such as light leaf spot.

With the annual cost of epidemics about £120m and fungicides declining in efficacy, there is an urgent need the improve the crop’s inherent ability to resist the disease.

“It means there is a more scientific basis to the breeding and [the process] can happen much quicker,” he adds.

University of Hertfordshire PhD researcher Chinthani Karandeni-Dewage has been working on a project aiming to uncover light leaf spot resistance genes, enabling breeders to use the markers to “stack” them in varieties.

She has particularly looked for a major resistance gene, but also highlighted the importance of minor genes as they tend to be race non-specific and combining them in the same plant gives an additive effect that is more durable against any changes in the disease pathotypes.

This quantitative resistance can be seen in varieties such as Butterfly, which has a moderately high score of seven for light leaf spot and is less susceptible to a rapid breakdown.

However, qualitative resistance relies on a single major gene that is highly resistant to disease, but can be quickly overcome by the pathogen in a “boom and bust” nature.

An example would be northern variety Cuillin, which had a light leaf spot score of nine, but was overcome by race changes within three years of commercial production and is now highly susceptible.

“It’s obvious we need more resistant cultivars and it will be important to combine different genes to improve the durability of existing resistance sources, enabling their use for a longer period,” explains Ms Karandeni-Dewage.